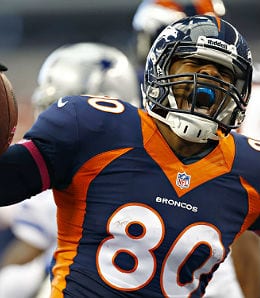 The 2014 RotoRob NFL Draft Kit hammers forward with another glorious cheat sheet. So while full contact heats up at NFL training camps, let’s review the top 20 tight ends in Fantasy football for 2014.

If you are old enough to remember or you have seen massive amounts of NFL Films footage, you might know of former NFL tight end Mike Dikta as a player. We must give him some credit for showing the football world that a tight end can be an impact player. If you roll back the clock back you will find he was the first real productive tight end. Ditka was force for the Chicago Bears as a rookie in 1961 when he scored 12 TDs and went over 1,000 yards receiving. His average yard per catch was staggering 19.2. “Iron Mike” was Rookie of the Year and he eventually went on to be the first tight end selected to the Pro Football Hall of Fame. While he never topped his rookie stats he was still a feared player throughout his career.

1. Jimmy Graham, New Orleans Saints (1): The position dispute aside, we all know what Graham can accomplish. He is a game-changing TE and no one else is close. Some other sites get lost in tiers and terraces or whatever. If you need us to tell you Graham is in his own tier you have a lot of terraces to climb. And no, don’t be thrown off just because he stays in pastoral-themed rooms (see video below).

2. Eric Ebron, Detroit Lions (NR): This placement was not made simply to get the sheer backlash it might endure. We gushed about Ebron last month in our NFL Draft Fantasy Stock Report and we feel even better now. Let the carving begin, we say. Megatron and Ebron will be like two thoroughbreds, miles ahead, coming around the last corner. Our bold prediction is that Ebron will end up with 900 plus receiving yards.

3. Julius Thomas, Denver Broncos (NR): After having one catch for five yards in 2011 and zero catches in 2012, Thomas ripped down 65 balls last year. Even more impressive was his touchdown total (12). Thomas is beholden to Sir Peyton and that is an amazing thing. We think achieving to reach the end zone a dozen times again is little far fetched but with Peyton Manning under centre, it’s not unrealistic.

4. Greg Olsen, Carolina Panthers (5): Olsen has been one of strongest, most reliable tight ends of his generation. Would you rather gamble on Rob Gronkowski’s health or have Olsen give you a steady total each week? The choice is all yours.

5. Rob Gronkowski, New England Patriots (12): If you have visions of Gronk playing in every game this season, you are either delusional or a fortune telling genius. Personally we feel he is a Gomer with too much money and not enough brains. Gronkowski is talented, but his lack of focus off the field and his lack of self-awareness cause us to tick the con side of white board too much.

6. Vernon Davis, San Francisco 49ers: Davis tied career highs in average yards per reception (16.3) and TDs (13). Remember though, most of that was accomplished without Michael Crabtree for the first 11 games. His anticipated holdout was averted, but because the aging Davis had great season in 2013 he believes he should be rewarded. We believe he is being his unlikable self and ultimately we hope we ranked him too high.

7. Jordan Cameron, Cleveland Browns (NR): Besides the injury-prone Miles Austin, Cameron is by far the best receiver on this team. No matter who the QB is, trusting in Cameron is logical even if the Browns suck again.

8. Jason Witten, Dallas Cowboys (3): Just because Witten didn’t pass the century mark in receptions (73) last season doesn’t mean he is washed up. He actually scored eight TDs which is awesome considering he only scored three in 2012 when had 110 catches. Witten is a tough and reliable customer who has missed just two games since 2004. Tony Romo still loves him and having some young underlings like Gavin Escobar and Terrence Williams around can only assure old man Witten will see single coverage in the red zone.

9. Jordan Reed, Washington Redskins (NR): Reed only stands 6’2″ and weighs just 237 pounds, but he is listed as a tight end. While this is not quite a Jimmy Graham-like conundrum, Reed does possess the ability and route running wherewithal to play anywhere. A horrific concussion forced Reed to miss the last seven games of 2013. However, he has been cleared of all cobwebs and he is ready to be an impact player. In just nine games last season (four as a starter) Reed amassed 45 receptions for 499 yards and three scores. He probably won’t be starter in most leagues in September but he will be on playoff rosters come December.

10. Jace Amaro, New York Jets (NR): What, another rookie? This dude can catch and absorb hits. Yes, we realize NFL hits are different, but Amaro can and should be a big part of this scheme. He will out-finesse Jeff Cumberland and Zach Sudfeld as well as many OLBs that attempt to cover him.

11. Kyle Rudolph, Minnesota Vikings (10): We are confident that Cameron will produce for Cleveland and that Amaro will do the same for the Jets through shaky QB situations. Yet, we feel it will hurt Rudolph. He will still be a viable option, but he is certainly not a must start. The Viking are in rebuilding mode and they already know Rudolph is part of their future. They will trust in him late in close games, but in this seemingly brutal division we don’t see them with too many meaningful fourth quarter drives.

12. Martellus Bennett, Chicago Bears (11): Bennett is entering his seventh year in the NFL, only starting 62 of the 92 games in which he has appeared. However, he has flourished as starter during each of the last two seasons. Bennett nabbed 65 balls in 2013 and 40 of those went for first downs. He did score three of his five TDs in the first two weeks, so consistency and the emergence of Alshon Jeffery thwarted his red zone targets. Given favourable match-ups, Bennett could be a strategic play in some formats. We also feel the continued success of Jeffery could mean isolated LB coverage for Bennett.

13. Charles Clay, Miami Dolphins (NR): After exploding from obscurity with 69 receptions, 759 yards and six TDs in 2013, Clay will now have to work hard to get open. He is a former college fullback who understands blocking schemes and how plays develop, so he never has much reason to come out of the game. Opportunity breeds value in this instance.

14. Dennis Pitta, Baltimore Ravens (9): Injuries cost Pitta much of 2013. Now, Owen Daniels and rookie Crockett Gillmore have been brought in as security. Pitta is still the guy, though, and Joe Flacco knows his tendencies. When fully healthy, Pitta has never seemed to produce consistent numbers each week and that’s why we say he is a solid bye week replacement for now.

15. Zack Ertz, Philadelphia Eagles (NR): Ertz only caught 36 passes last year but with a loaded weapon pool he will be left to swim in single coverage. The red zone may be a dead zone for the high-flying Eagles wideouts, so Nick Foles will look to Ertz when the pocket crumbles.

16. Troy Nikolas, Arizona Cardinals (NR): Don’t worry about the hand Nikolas broken in June. He is Notre Dame tough and ‘Zona will protect its investment. Also, because he’s from the Fighting Irish, we trust Nikolas to learn the playbook flawlessly. The 6’6″, 270-pounder is not flashy but he should be very efficient.

17. Tyler Eifert, Cincinnati Bengals (20): At times last year, Eifert looked poised to dominate. He ended up with 39 receptions and pair of scores. The potential is there and we expect a slight improvement statistically for Eifert in 2014.

18. Ladarius Green, San Diego Chargers (NR): Green had just 17 receptions in 2013, but nine of those went for 20 yards or more and 15 of them produced first downs. Antonio Gates did not make our top 20 because we believe Green is now the man for the Bolts.

19. C.J. Fiedorowicz, Houston Texans (NR): While watching Fiedorowicz in college it was hard not to be reminded of Fred Biletnikoff’s stickum days in Oakland. More or less we love Fiedorowicz’s hands and he tracks the ball well. He wasn’t overly used at the University of Iowa but the Texans appear set get him involved. Garrett Graham might be the starter in Week One, but Fiedorowicz will prove his worth by season’s end.

20. Coby Fleener, Indianapolis Colts (NR): We were ready to bury Fleener as a bust last summer but he stepped up and became a legitimate target. His 52 receptions and four TDs were a needed asset for Indy. More growth is expected.

Now it’s your turn. Let us know in the comments below how your tight end rankings look.