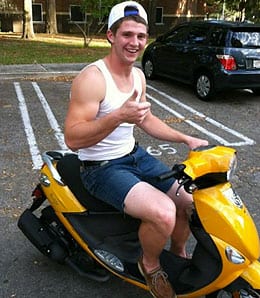 Jeff Driskel won’t be playing football — or riding his scooter — for a while. (ThrowtheFlagblog.com)

It’s been a few weeks since we last checked in on some college football action, so let’s have a look around the nation at some stories that are catching our eyes.

There are some players with tremendous potential this post-secondary season. They are being watched closely by NFL scouts in addition to U.S. sportsbooks that dictate the official college football futures which can change day to day depending on player performance. These players are worthy of your attention and we’re going to do our best to keep you informed.

The 20th-ranked Florida Gators had a nice bounce back effort last week, defeating Tennessee 31-17, but it was a costly win. Starting QB Jeff Driskel, who was off to a very nice start, suffered a broken leg that will cost him the rest of the season.

On Tuesday, Florida’s defense took a hit of its own when senior defensive tackle Dominique Easley suffered a knee injury in practice that according to his tweet Wednesday would likely cost him the rest of the season or at least that was his insinuation: “Gatornation thank you for all of 4 yrs of sticking with me but god has something else planned for and have no worries #believe.”

Gator Coach Will Muschamp laid that to rest, saying that Easley only “tweaked” his knee and that the team thinks he’ll be fine.

Could there be a quarterback controversy brewing at Ohio State? Usual starter Braxton Miller is ready to return from his sprained knee, but Coach Urban Meyer doesn’t sound ready to simply hand him back the job that has been done very capably by backup Kenny Guiton for the past couple of weeks.

Over the last three games, Guiton set a school record with 12 touchdowns and has earned back-to-back Big Ten Offensive Player of the Week honours. But in Miller, we are talking about a player that finished fifth in the Heisman Trophy voting last year, so how can you really keep him on the bench if he’s healthy, regardless of Guiton’s exploits? It’ll be interesting to see how this plays out as the Buckeyes near a huge matchup Saturday against No. 23 Wisconsin.