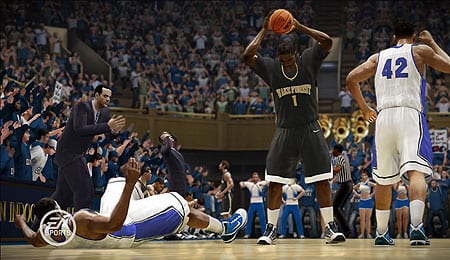 Even in the virtual world of college basketball, Duke’s players flop like they’re on the soccer field.

There was a time that I actually preferred the NCAA Football series to Madden, but that ship sailed some time ago and I’ve exclusively played pro sports titles since moving to the current generation of consoles. That changed with the arrival of NCAA Basketball 10, EA Sports’ latest foray into the world of collegiate hoops. Is it enough to renew my enthusiasm for the amateur sports world, or am I heading back to my beloved overpaid virtual athletes as soon as I’m done typing this? We’ll see.

NCAA Basketball 10 does a lot of things right with its controls, making for a game that’s immediately accessible and yet still has enough depth that you’ll improve as you play. All your shooting will be handled with the X button, while passing can be done by pressing A (at which point you’ll dish the rock to the teammate you’re facing) or holding down the left trigger and choosing the face button that appears over the players’ heads. One of the cool things on that front is that if you keep the left trigger depressed you can take control of whichever player you select, allowing you to run them to open spots and then passing the ball by releasing the trigger. It works great and really elevates the gameplay. You can also call for picks (B) and attempt alley oops (right bumper).

The best addition is the motion offense, which is initiated with a tap of the left bumper. Once activated, your A.I. teammates will start moving, setting picks and posting up off the ball. As they do so the face buttons over their heads turn from gray to colour to indicate they’re open to receive the pass. Be warned that turnovers do still happen so don’t rely exclusively on the button indicator. If a player looks covered don’t throw the ball. This feature adds a lot of realism and helps differentiate NCAA Basketball 10 from the pro offerings out there. I’m also pleased to say that I ran a ton of motion offense and never felt like I could just dial up a specific play that couldn’t be stopped.

For those that prefer to run isolation or penetrate and kick, EA has you covered there as well with multiple offensive sets that can be called by holding down the left bumper. You’re supplied with turbo (right trigger) and a collection of spin moves and crossovers mapped to the right stick to help you break down your defender. However, as well as perimeter play is handled, post offense feels pretty lean and affords only a handful of moves at your disposal.

Defensively, things don’t hold up quite as well. Your player assumes a defensive stance on his own and with practice you’ll be able to keep people in front of you. Those that don’t want to be bothered with trying to lock down their opponent on their own can hold down the right bumper to activate the defensive assist, which functions fairly well as a passive alternative. Assuming you elect to control your own player you can try to steal or deflect a pass with the X button, switch players (A), execute a double team (B) and block/rebound (Y) as well. The right stick also comes into play on defense as you can raise your hands by pushing the stick up and attempt to draw a charge by pushing it down. For whatever reason, you cannot keep your hands elevated and move.

While those moves function well for the most part, things once again bog down when the ball gets down low both in regards to post defense and rebounding. Unlike the 2k series where you can engage players with their back to the basket or box out, NCAA Basketball 10 makes it too difficult to maintain steady body contact and therefore you’ll give up too many offensive rebounds. I found it best to let the CPU handle things down low and bring a guard down to help out on the glass. With so many areas controlling so well, the shortcomings on the low block are exacerbated, but they’re not close to enough to dissuade you from playing.

Unquestionably, the biggest graphical selling point of NCAA Basketball 10 is the fantastic job that’s been done in terms of recreating a television viewing experience. The game features not only all the authentic overlays and graphics from ESPN’s college basketball telecasts, but CBS Sports’ as well. It’s incredibly cool to have that variety especially during the NCAA Tournament, which has been shown on CBS for decades, as it adds a level of authenticity. Everything looks spot on throughout each game from the starting lineups to keys to the game to highlight packages. This opens up so many possibilities for future titles I’m already salivating at the potential of seeing other pro titles getting the same treatment.

The player models look decent, but given the number of teams and players, you’ll see plenty of clones throughout the game both in terms of body type and faces. Animations look really strong for the most part with guys reacting naturally to collisions, swatting shots and diving for loose balls. You’ll see the occasional out of place animation, such as someone falling for no apparent reason following a shot, but they’re few and far between. The uniforms themselves are vibrant and the new cloth animations make the player movement look more realistic. Also worth noting are the beautifully rendered arenas, which come complete with dynamic fan and bench reactions.

While most of the graphical work is spot on, the audio presentation fails to match. I do applaud EA for including two distinct broadcast crews with Brad Nessler, Dick Vitale and Erin Andrews handling the ESPN games while Gus Johnson and Bill Raftery draw the duties on CBS. However, you’ll find the dialogue quickly repeats, particularly on the CBS side, and they rarely match the emotion of the fans or players on the court. For instance, I buried a go-ahead three late in a Sweet Sixteen contest and the Johnson/Raftery combination barely batted an eye. It’s strange, considering Johnson does as good a job as anyone in the business at adding excitement to a broadcast, but for whatever reason it simply doesn’t come across here. The sound effects and crowd noise is well done while the soundtrack consists of collegiate fight songs.

The in-game action in NCAA Basketball 10 plays out at a good pace, with players moving fast enough to keep things exciting without going so fast that it gets an arcade feel. The A.I. is generally good, though there are some hiccups in that department. Players will drift out of bounds and still call for passes or move into the backcourt, which shouldn’t happen. Defensively, you’ll see instances where players look confused as to which zone to occupy. This leads to things like your 2-3 Zone becoming a 3-2 and guys in the post being left unchecked. I’d also like to see interior defenders do a better job of collapsing the lane when the perimeter defense breaks down rather than doing matador impressions as the opponent attacks the basket for an easy layup. All those issues are fairly minor, but it’d be nice to see some of those things get cleaned up.

In terms of modes, you’ll have the option to play a quick game, enter a handful of authentic tournaments (like the Maui Classic), skip ahead to the big dance or compete in dynasty mode. Obviously, the dynasty mode serves as the primary single-player option, allowing you to take over at the helm of a program and steer it for up to 30 seasons. Along the way you’ll get to do things like recruit players, build new additions to your school’s facilities and customize your non-conference schedule. Perform well and you’ll be rewarded with more scholarships and an increased budget. Become the basketball version of Charlie Weis and things won’t be so rosy.

Recruiting players is the most important aspect of the dynasty mode, and it’s handled fairly well. You’re given a certain number of recruiting points and scholarships to offer high school seniors to begin with and it’s up to you to distribute them. E-mailing an athlete will only cost one point, but dispatching your head coach to meet with him personally costs considerably more. It becomes a balancing act, though I felt players were pretty quick to commit to my program even though I was at mid-major Creighton. It certainly seemed to be a far cry from the days when five-star recruits wouldn’t even look my way in the NCAA Football days when I was running the Akron Zips.

One of the cool aspects of dynasty mode is that the game reshuffles the “toughest places to play” (a list of 20 arenas where it’s more difficult to succeed, complete with shaking cameras during the on court action) after each year, meaning sustained success at home could earn you a spot on the list. The game accurately calculates RPI and has both Top 25 polls, though I found those rankings to favour the major schools too much. I guided Creighton to a 34-0 season that included wins over ranked teams Kansas (No. 1), West Virginia (No. 7) and Butler (No. 20), yet never climbed past the 17th spot. And when the tournament arrived, complete with a little selection show, my Blue Jays were given a No. 4 seed.

Unfortunately, I did encounter one serious issue during dynasty mode, and that was my game freezing up during games on several occasions. Thankfully, most of the time it happened during the pre-game breakdown, though I did have two games freeze in the second half as I was winning. Not cool. I tried downloading my game to the hard drive, but it made no difference. A scan of the forums showed I’m not alone and that the issue existed on both the Xbox 360 and PS3 versions. Hopefully a patch will be forthcoming from EA Sports to fix that issue.

Online play is also supported via Xbox Live with the usual lobbies and quick play options. It’s not a deep community like the Madden or NHL series, but you shouldn’t have trouble finding a match and the performance is generally lag free. There’s also the ability to download dynamic updates from EA every Monday throughout the season to update rankings, RPI and statistics. Early returns are positive, though the updates seem to overwrite any roster changes you’ve made. I had downloaded a file through the EA Locker that contained all the real names of the players, however upon getting the update, the players reverted back to being listed by their position and jersey number.

Despite still having some kinks to iron out, most glaring the freezing problem, NCAA Basketball 10 boasts tremendous presentation values and the motion offense really serves to recreate the feel of college hoops, making for a fun experience.