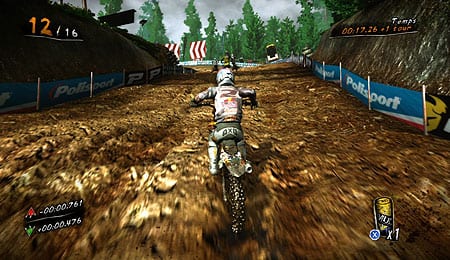 It’s about as exciting as it looks.

When I saw the title to MUD – FIM Motocross World Championship, I just had to think to myself for a while. There was an actual meeting somewhere in which people actually decided to name their game MUD. I understand that it’s a motocross game, but I cannot keep a straight face imagining someone asking for this at a store. It just made me wonder how much thought they put into naming this game. As for the game itself, it’s as basic as a racing game can get.

MUD controls work well. They do a great job of capturing the physics behind driving a motorcycle, as turning and jumps require a different approach than a car racer like the Forza or Need for Speed series. The only area I would say that falls short is in the tricks, which can feel very awkward to pull off successfully.

All I can say for the graphics is that they deliver on the title. This is a very brown game, with tracks that — despite their different layouts — mostly ended up feeling the same when you’re actually racing through them. Outside of that there was nothing that stood out in either a positive or negative way. Everything got the job done, but nothing more.

The soundtrack, however, is very good. There’s an ample selection of songs, most of which are both enjoyable and fit the game’s style well. Sound effects, like the graphics, were not terrible but nothing stood out, either.

The best thing I can say about MUD is that it has a good variety of modes and tracks. These include races, time trials and a trick challenge. Out of these, racing challenges were the most fun, yet suffered from a lack of difficulty. Even on the harder settings, I was able to get to first place on the third attempt at most. This means they were not frustrating, but it also indicates that they were not as satisfying as they could have been had the challenge been increased.

Beyond that, the rest of the modes work well with the exception of Trick Mode. As noted earlier, tricks were always awkward to pull off, so an entire mode based on them didn’t exactly make for a lot of fun. Therefore I tended to avoid doing them unless I wanted a really easy way to unlock something new. The tricks themselves even felt out of place outside this mode. The game did not keep score to make attempting them worthwhile nor was there a noticeable boost from successfully pulling them off. This just made them feel pointless and something that only existed to give the player something to do during jumps.

It may feel like this review is a little too basic, but that is mainly because there’s barely anything to MUD. The best thing I can say is that there is nothing horribly wrong in MUD – FIM Motocross World Championship. It’s a middle-of-the-road title that neither excels at anything in particular nor does it provide anything original or different. Ultimately, there are plenty of better racing games out there.