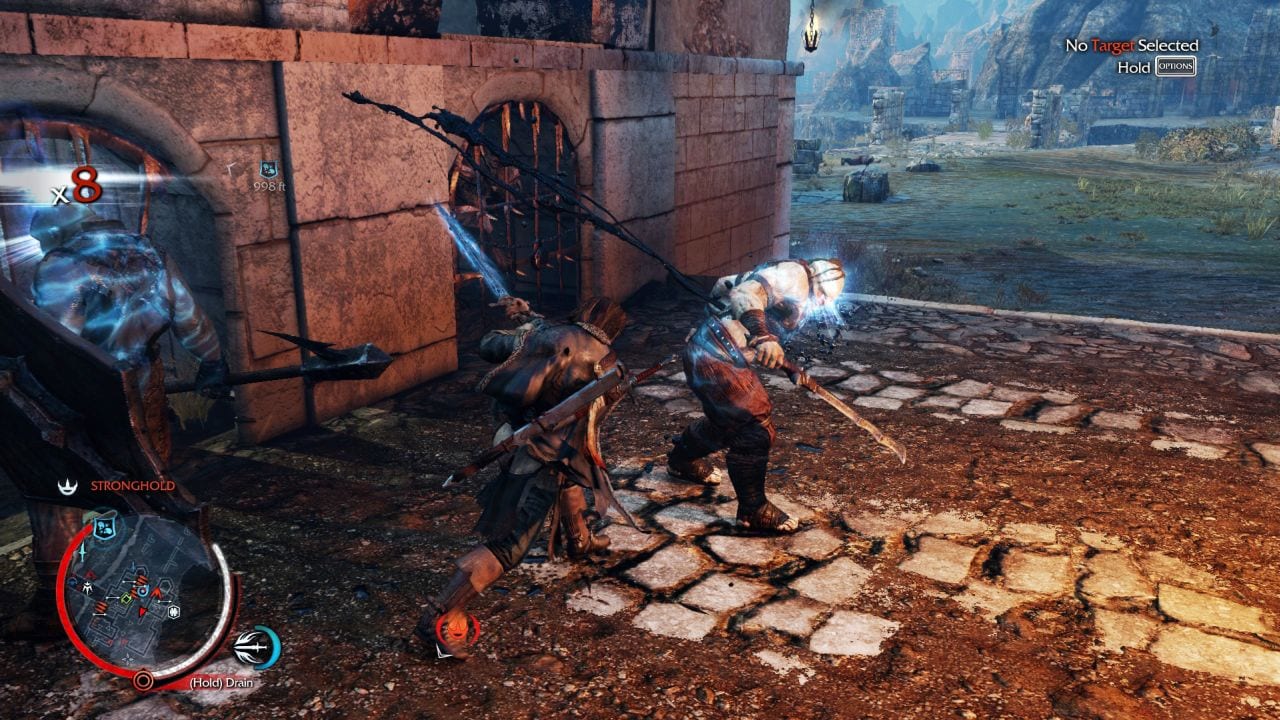 Make all the jokes you want about “simply walking into Mordor,” maybe it isn’t as difficult as famed. In Monolith Production’s Middle-earth: Shadow of Mordor you step into the worn Ranger treads of Talion. It is not long until a severe curse is set upon you, trapping you in life after being robbed of everything you had to live for. And so, don’t walk, stride into Mordor and reap your revenge.

If you are familiar with the Arkham or Assassin’s Creed series then you will have an easy time getting the hang of Uruk slaying. Shadow of Mordor allows players to easily free run, bound over obstacles and climb buildings by varying between tapping and holding the “X” button. Even though Talion is a beast in combat, you will absolutely have to employ the environment to your advantage, so mastering your surroundings is essential and eased by your combat prowess.

Monolith made literally every button on the controller essential to survival. The remaining face buttons are used for covering attacking, countering and stunning, respectively. Giving the left trigger a pull will switch you into a temporary slow-motion ranged mode in which you can fire off shots with the right trigger (or the right bumper with proper skills unlocked). You may also enter the Wraith world by pressing the left bumper, which we’ll elaborate on in the Gameplay section below.

As with the above comparisons, combat is all about timing. The reason that this didn’t get a flat five is because you may occasionally run into a situations when you’ll absolutely swear that you hit the button when prompted but end up flubbing a recovery or combo. Ultimately, though, it’s an easy scheme to pick up and awards practice.

On the new-gen systems the game is an incredible experience, creating a beautiful world despite the desolate and unsettling nature of the story. Tragedy and vengeance haven’t looked this attractive in a long time. The cut scenes and gameplay blend so flawlessly together that it isn’t immediately discernible whether or not the scenes are pre-rendered or not. Some very impressive work was done to accomplish some cool transformation effects that we’ve never seen done so well before.

Facial expressions are top tier, and the look on an Uruk when you treat him to a surprise beheading is strangely captivating. All of that beheading, accompanied by multiple stabbings, slashes, dodges and throat cuttings all feature brutal and fluid animations that just have an epic LOTR vibe.

The game world itself is also alive with various wildlife and passing of time and weather effects — and in the land of Mordor, when it rains it really rains. Not only does the rain obscure your vision, it does so beautifully by sending nice, plump raindrops from the sky that splatter and bounce with a realistic heft. In turn, the rain also shows off some great wet texture effects such as Talion’s soaked and tattered cloak. So yeah, Shadow of Mordor looks great, plain and simple.

No expense was spared when it came to audio production for this game, as talent such as Troy Baker and Alastair Duncan lend their voices to the lead characters. Their delivery compliments one another and the two actors bring a high level of player engagement to the development of their characters’ relationship. The soundtrack is also of the quality we have come to expect of the LOTR franchise, and the placement and direction literally couldn’t be any better.

As your quest for vengeance begins, it turns out that the curse set upon you didn’t quite have the intended effect, resulting in a Wraith being bound to your soul. You both share the same body now, and with the combined powers of the Ranger Talion and the ancient Elf Lord Celebrimbor, you embark on a mutual quest for answers and revenge.

As it turns out, being essentially a Ranger Wraith has its benefits, like being able to enter the Wraith world to identify targets, find hidden glyphs and execute powerful moves. One of my particular favourites is Shadow Strike, in which you can aim your bow at an enemy and blink to him in order to perform a one-hit kill.

Without giving too much away, the path to revenge involves riding Caragors, hunting Graugs and, oh yeah, raising an Uruk army to ensure that revenge can be attained. You grab an Uruk by his big, bloodied face and scream ancient Elvish at him and all of a sudden he’s divulging the weaknesses of the other Uruk captains to you.

Interrogation and conversion is how you build your army. This becomes considerably easier after progressing through the story enough to unlock the necessary skills, one of which allows you to capture an orc whether by surprise or near the end of combat and brand him. Once an Uruk has been branded, he can be “activated” at any time and fight by your side. This is a great tactic for when you want to ambush a Warchief and install one of your cadets as the new leader.

This is where the “Nemesis System” comes into play. Say you get overwhelmed by an Uruk patrol and one gets the best of you. Guess what? Since he just murdered a Ranger he gets a promotion and a spiffy new set of gear and traits. We made enemies very early on, and having an Uruk go from peon all the way to a Warchief’s bodyguard just from my failed attempts at killing him made him stronger.

We needed to end this jerk’s life, and nothing satisfied us more than when we found out through another Captain that he was terrified of burning and explosions. We stalked him for what seemed like an hour, through rain and darkness, searching for a bee nest for a distraction or a grog barrel to taint. Luck only came when we found him chumming it up with another Captain next to a campfire. We took aim at the flames and set them both alight in a great explosion. They both panicked and met the end of my blade while their skin cooked their last breaths away.

Middle-earth: Shadow of Mordor is beautiful, addictive, fun and a breakthrough in AI interaction with the Nemesis System. It offers a full, rich experience that not only LOTR gamers will enjoy — it’s just a damn good game that provides a dark, moody cinematic tale unlike any other. This game is a must have.