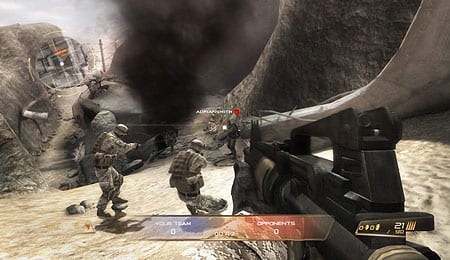 The graphics may be bland, but the action is solid.

The No. 1 reason shooters dominate the gaming landscape is the countless hours that can spent battling online. As a result, single-player campaigns have become something of an afterthought. It should come as no surprise then that a new breed of inexpensive, essentially online-only shooters have begun to emerge. The most recent entrant is Gameloft’s Modern Combat: Domination, a Playstation Network exclusive that aims for a retro feel…but does it hit its mark?

As many of you know I prefer the Xbox 360 controller when it comes to shooters. That being said, Modern Combat is instantly accessible as it uses the Call of Duty setup right down to clicking the analog sticks to sprint and melee. It does feel a bit sluggish, both aiming and moving, but that’s more of a gameplay issue than a control one. Plus, although I did not test it, the game does support the Playstation Move.

There isn’t much to get excited about here. You’ve seen the game’s five locations in one form or another in plenty of other shooters with pathways laid out to allow multiple access points to rooms and dissuade camping. The level of detail is fairly sparse throughout, but if that’s the price to be paid for a usually smooth frame rate then so be it. What is disappointing is the lack of impact from explosives or the last gen smoke effects when you pop a grenade for cover.

Outside of a song that cycles during the menu and load screens the audio is comprised entirely of sound effects. What’s present is a decidedly bare bones affair with things like explosions and weapon fire coming off muted and unimpressive.

Innovation probably wasn’t a word tossed around much at Gameloft during the developmental stage as you can see plenty of influences on Modern Combat, most notably Counter-Strike. A word that probably was, however, is “value” as it comes packed with five mid-sized locations and six games modes, three of which can be played on any map and three others that are location specific. The entire package will set you back a mere US$7.99 — not bad.

The game’s six modes should be very familiar with Deathmatch/Team Deathmatch, Domination, Extraction/Escort and Boom and Bust (detonate or stop a bomb). The latter three feature a system similar to SOCOM, which includes a single life per round. Given the smallish map size these can try your patience as load times have a tendency to nearly match the length of the rounds. Old school gamers may appreciate that throwback vibe, but I doubt it’ll stick with the Call of Duty crowd.

Regardless of mode, Modern Combat utilizes a money system that dictates what guns and equipment you’ll be able to spawn with. The default amount ($2,400) is enough to buy a basic weapon and either some grenades or a piece of body armour. If you want better stuff you’ll need to stay alive as only things like kills and assists earn funds. For instance, a kill is worth $500, a headshot an extra $200, a melee kill nets you another $250 and so on. There are also bonuses available for things like double kills and kill streaks.

It’s an interesting system that encourages intelligent play, though regardless of your approach it’s no easy feat racking up enough kills to secure the game’s better weaponry. Thankfully, Modern Combat doesn’t appear to have any truly overpowered guns or tactics so even those that are consistently stuck at the $2,400 level are lethal. Plus, despite higher level players having access to more powerful weapons they’re still bound by the same cash restrictions as newcomers.

Modern Combat supports up to 16 players online and will fill in empty spaces with bots, which can be both a blessing and a curse. On one hand it keeps the maps populated, but on the other you’ll find the bots’ A.I. to be pretty uneven with a mix of incredible kills and jaw dropping deaths. Overall, though, they seem to trend toward the incompetent side. For example, I was in a game with 15 players and our side had the lone bot. We won by two kills and when the final kill/death ratios were posted our bot had posted a cool 1/33 — wouldn’t we be much better off just going 7 on 8 at that point?

Beyond the A.I. there are a handful of issues that hold Modern Combat back. For starters, getting a melee kill on a moving target is nearly impossible — and even in those instances you do connect there’s a slight delay so you’re still doomed to flail around like a jackass. Second, it’s tough to distinguish friend from foe at first sight. Friendly units have a blue chevron while enemies sport a red one, but they don’t appear immediately, leading to some awkward moments. Hit detection can also be a sore spot as there have been times I’ve had to fire full clips into a stationary enemy to drop them.

Lastly, the game’s spawn system could use some tweaking. Ostensibly it’s looking for a safe point to drop you off, but it seems like a couple of times per game you’ll find yourself overrun or even shot in the back in a matter of seconds. It’s unfair and can be downright infuriating when you just purchased some expensive weapons only to be gunned down before squeezing off a single round.

While I’d love to see some issues cleaned up, Modern Combat: Domination still rates as a fun change-of-pace shooter with an undeniably attractive price point.