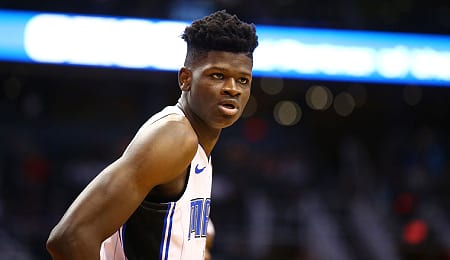 Welcome back to another week of Fantasy basketball. We’re into late-November now, which means you’re beginning to gauge the strengths and weaknesses of your team. Use that wire to shore up any weaknesses!

This week, Giannis Antetokounmpo went off for a career best 15 assists as part of his second triple-double of the season; according to his trainer, Carmelo Anthony has re-entered the NBA with a renewed focus on defense; and Wataru Misaka, the first NBA player of Japanese descent passed away at the age of 95.

Mo Bamba, C, Orlando Magic (ESPN: 6.8 per cent; CBS: 19 per cent): In late-January we recommended Bamba as a deep league special for those seeking blocks, but almost immediately he suffered a stress fracture that cost him the rest of the season. However, with Nikola Vucevic (ankle) now out for the next four weeks, Bamba has another chance to offer value. Bamba had three blocks in just 16 minutes on Wednesday, and the seven-footer should be in line for more minutes now and could even see his first starts of the season. This dude is an elite physical specimen with a massive wingspan and huge reach, but he could stand to be a bit more physical, especially since he’s added weight since being drafted. In Summer League, Bamba showed he could run the court and throw it down, but also nail it from outside (see video below). Expect third-year big Kehm Birch to also see a nice uptick in PT with Vucevic out.

Duncan Robinson, SF, Miami Heat (ESPN: 2.2 per cent; CBS: 7 per cent): Miami has been one of the early-season pleasant surprises in the NBA, and one of the reasons why has been the play of young players like Robinson. The second-year forward has seen a major boost in minutes recently and he’s responded with four straight games of at least 11 points, including a whopping 29 on Wednesday. Robinson is seeing more than double the PT he did as a rookie, but has more than tripled his scoring output. That’s progress, baby.

Al-Farouq Aminu, PF, Orlando Magic (ESPN: 33.3 per cent; CBS: 5 per cent): Aminu is yet another Magic player that will benefit from an ankle injury to a teammate, in this case Aaron Gordon. Aminu has never been much of a scorer, but he’s going to get a chance to contribute now, and recently recorded a double-double with a couple of steals, so he can be productive at times. He hoisted up fewer treys last season, but that number has really dropped off the table so far this season, so let’s see what happens now when his minutes rise.

Nerlens Noel, C, Oklahoma City Thunder (ESPN: 4.7 per cent; CBS: 22 per cent): Noel is seeing more consistent PT lately, proving a nice source of boards, blocks and steals, and he even flashed some offense on Tuesday with 15 points. We all know how athletic and what a tremendous defender he is, plus the kind of potential he has, but he’s seen less and less court time since his rookie season. This season, Noel has been shooting very well from the line (career best 81.5 per cent), shoring up yet another weak area of his game. The sixth overall pick from 2013 is currently worth a look.

Ben McLemore, SG, Houston Rockets (ESPN: 0.2 per cent; CBS: 4 per cent): With Danuel House (shoulder) out Friday, and possibly returning on Sunday, McLemore gets a brief shot to start and see if he can contribute. You may recall that McLemore was the seventh overall pick in 2013, but he’s never managed to get over the hump after showing potential in his first couple of seasons. He’s been active a lot more in his first season in Houston and showing some signs of life after looking done in Sactown. Last weekend, for instance, McLemore recorded back-to-back 20-point games with Houston dealing with several injuries to its backcourt. Keep an eye on him; maybe he’s still got some game.

Soul/funk/jazz composer Roy Ayers is one of the preeminent vibraphone players around, but it’s his song-writing that history will really remember him by. Here’s another track from the 2003 compilation, Virgin Ubiquity (Unreleased Recordings 1976-1981), which really blows your mind about how good his material was if this stuff didn’t get released at the time it was recorded. This is “I Am Your Mind,” featuring Merry Clayton, best known for her work on “Gimme Shelter” by the Rolling Stones.