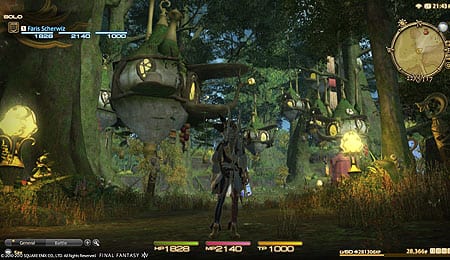 Cats and dogs. Oil and water. Toothpaste and orange juice. Yes, certain things just don’t mix, and one could easily add me and MMORPGs to that list. The lone exception, however, was Square-Enix’s Final Fantasy XI, which I invested loads of time in. My interest level eventually waned, but not before I had several jobs in the high 40s (my ranger/ninja being my favourite). Given the fun I had with that one, I decided I’d go once more unto the breach and dive headlong into Final Fantasy XIV: A Realm Reborn. Now, 50-plus hours in, let’s see where we stand.

There is a lot going on and a lot to keep track of in FFXIV, and unsurprisingly the controller-based setup feels overwhelming at times. As a silver lining, most of those shortcomings fall under the category of being inconvenient or obtuse rather than legitimately affecting gameplay. Toggling between the various windows, for instance, gets cumbersome, and the in-game map could use some refinement. In fact, I’d love to see an update that introduces something similar to Dead Space, in which clicking down on the analog stick points you in the proper direction.

Combat is pretty straightforward, and the game does a good job of metering out new abilities and upgrades so that by the time you’ve got lots of them at your disposal you already have a pretty good handle on things. It’s not all chocobo feathers and moogle pom-poms, though, as the targeting system continues to give me trouble even after tons of battles. At issue is how easy it is to accidentally attack a second foe, which can lead to a quick death under the wrong circumstances. Along those same lines, during hectic encounters it can be nearly impossible to pick out a specific enemy from the pack.

It’s also important to note that voice chat is not supported on the PlayStation 3, and that means you’re going to want to invest in a USB keyboard — at least if you’re interested in communicating beyond a handful of pre-determined phrases — as typing with the controller is as bad as it sounds.

As with Diablo III, there’s nothing visually awe inspiring here outside of the incredible FMV stuff, which is typical Square-Enix eye candy. Given that this a multi-platform game intended to run on both a home console and mid-range PCs, however, it still looks sharp and runs fairly smooth. As such, it’s easier to make concessions and overlook things like objects and NPCs popping into existence before your eyes or frequently clipping through one another.

From a variety perspective, FFXIV does a strong job of keeping the various areas of the world looking different from one another. Deserts, forests, islands and more can be found in this gigantic world, and all of that helps keep an inherently repetitive experience from becoming monotonous. There’s also loads of enemies to fight and various armour/weapons to equip. The battles themselves aren’t particularly impressive, though I found myself focusing on the various bars and cooldown timers anyway.

A nice blend of peaceful tunes and much more dramatic fighting music is the dominant feature on the audio side. It’s not a great showing by any means, but in a game in which hours turn into days it has to count as a victory when the soundtrack doesn’t become annoying. The sparse voice acting is hit or miss while sound effects (shouts, clashes of weapons, spells, etc.) are solid.

Although there is a main story arc in Final Fantasy XIV: A Realm Reborn, the truth is that whether or not the game succeeds as an MMORPG has essentially nothing to do with it. When you’re asking your audience to invest days, weeks and months (maybe even years) of their lives into a game of this nature it all comes down to offering up enough interesting content to keep them engaged. So, let’s start at the beginning with character creation and work forward.

There are five available races, each with a male/female option and two secondary clans (for instance, as an elfin character you can choose either the Wildwood or Duskwight back story) for a total of 20 options to choose from. Once you’ve got your basic archetype you’re free to make all manner of adjustments to their physical appearance. It’s fairly robust, and I was satisfied with the level of customization. Rounding out the important selections is your initial class. There are eight available, and your starting point is determined by your selection — archers begin in Gridania, gladiators in Ul’dah and so on.

From there you’re introduced to the storyline and various game mechanics through a series of NPC missions. Some are interesting, some aren’t, but the common thread is that they’re acting as a lengthy tutorial, simultaneously acclimating you to the actions and activities you’ll need to know as well as the lay of the land. Upon completion of each one you’re given experience points, gil (money) and often a new piece of armour or weapon.

What’s very different here versus Final Fantasy XI is that a much greater percentage of the game can be tackled solo just by following and completing the NPC missions. Tougher battles, known as duties, often include NPCs joining you to aid in the fight. There are certain missions that require you to party up, but the game’s focus has clearly been geared more toward individual achievement.

Not surprisingly, the results are mixed. On the one hand you’re not left to rely on others for most of the game, and it even includes a “duty finder” to bring players together in a party when necessary. On the other, it creates an expectation of instant gratification in which group failures are often accompanied by everyone immediately disbanding. It’s a long way from the close knit FFXI level grinding in which parties would stick together for hours at a time, climbing levels and amassing loot.

Another notable change comes in the progression system as the strict pairing of job and sub-job has been removed. So, while unlocking advanced jobs still requires you to push a primary class to Level 30 and a secondary one to Level 15 — i.e., to become a dragoon you must be a Lvl 30 lancer and Lvl 15 marauder — there’s no longer the expectation that if you’re a specific job that only one or two other classes are acceptable sub-jobs. Instead, as you level up you’re able to equip skills that have been learned in other classes, which allows for more flexibility.

What hasn’t changed is the vast amount of information to sort through, and while the game does a decent job of introducing and explaining things, I still found myself looking things up online with great frequency. If that’s not your style you could probably still stumble through it as key advancements, such as the ability to travel by airship, ride a chocobo or unlock advanced jobs, are nearly impossible to miss. Still, there’s no doubt the Internet is a very valuable companion when considering character builds, locating important side quests and more.

In terms of actual gameplay, activities in Final Fantasy XIV can be compartmentalized into two categories: combat and crafting. Both revolve around guilds in which new quests open up every five levels, often rewarding you with new abilities in addition to weapons and equipment.

On the crafting side it’s pretty straightforward with recipes easily accessible as you turn raw materials into finished products in any number of disciplines. There’s also a subset of crafting known as gathering, which relates to harvesting goods to sell or craft with. It’s enjoyable as a distraction, but if you really want to get involved there’s a sizable investment of time (read: grinding) and often gil.

Combat is fairly repetitive as well, and the fact that you have to hold down the left or right triggers to access your attacks makes long battles or extended hunting/grinding tiresome. To counteract that, the game lets you program your own macros, allowing you to queue up multiple strikes, along with the requisite cooldown time in between, to fight enemies without constant direct input.

It helps maintain sanity and the health of your fingers, but it also divests you from the battles as they’re taking place. Plus, as the act of pre-programming your attacks suggests, there’s pretty much always a “right way” to utilize your skills. For example, as a lancer I used the basic true thrust followed by the Vorpal thrust multiple times every fight because it was the most effective way to deal damage. Without macros, combat is basically a lot of you monitoring status meters, cooldown timers and being ready to move to avoid area-of-effect attacks. With them, it’s almost like watching a game play itself.

While Final Fantasy XIV: A Realm Reborn lacks any true standout feature, there’s nothing really bad that turned me off from the experience. It’s a fun game that can be played in almost any increment of time depending on what you want to accomplish in that session. If you’re looking for an enjoyable MMORPG set in the rich Final Fantasy universe this rates as a good purchase.