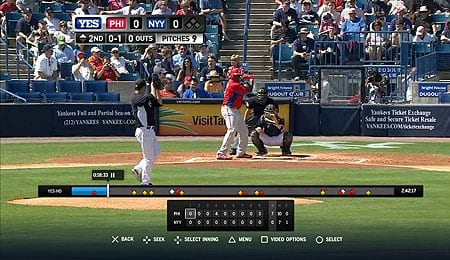 The differences between the PS4 and XB1 apps are significant.

With the launch of the two new consoles, we thought it was a good time to revisit the MLB.TV Premium app that was released just in time for Opening Day on the Xbox One and PlayStation 4. Priced at US$129.99 for the season, or US$24.99 per month, let’s see how the app performs on these new platforms.

Upon launching, you’re presented with a full-screen grid showing all the games for the current date. By default, these go top left to bottom right in order of start time, though if you identify a favourite team they’ll be moved into the first slot and starred. You can switch days with the shoulder buttons or view a monthly calendar by clicking the left stick. It’s very intuitive, well laid out and makes finding games a breeze.

When selecting a game, you’re given two rows of options. On top you can choose between the home and road feeds, and on the bottom you can choose when you’d like to join the action (live, from the start, or you can pick up where you left off if you’d previously been watching). Once the game is up you’ll notice an ongoing time line along the bottom. This is the app’s coolest feature as it tracks events in the game, allowing you to quickly skip to them.

Everything is customizable as well, so if you only want home runs to appear in the timeline you can toggle the other events (hits, runs, stolen bases, strikeouts, etc.) off. The left/right shoulder buttons are used again here, and it’s just a great way to catch all the big moments if you’re short on time.

About the only thing missing is a “quick step” function, by which we mean the ability to jump forward or back in a short interval, like about five seconds. Instead, fast-forwarding or rewinding is done in 30-second increments, so if you wanted to take a second look at a borderline pitch or prodigious blast you’ll have to sit through some dead time to see it.

Launching the app brings up a grid similar to the PS4, but it only shows a partial schedule with one game appearing in a much larger window than the rest — it’s unclear why said matchup is featured, either, as it is not the daily “free game.” It’s weird not to have all games on screen at once, and it’s even weirder that you cannot access the “Daily Schedule,” which does display the full slate, without scrolling over and selecting that option.

Also annoying is the fact that only the analog stick (or d-pad) and A/B buttons are in use from the schedule screen. We don’t understand why we need to move the cursor to the left or right arrows and then select them when we’ve got right/left bumpers and triggers not being used. Compared to the smooth PS4 interface this feels downright archaic.

As with the PS4, you’re given the choice of home or away announcers. That’s your only option, however, as the app automatically takes you to live action, and the only way to go back to the start is to manually rewind it. The setup is shockingly limited, offering just fast forward, rewind and a 10-second jump. There’s no event tracking, you can’t switch feeds without going back to the main menu and there’s no way to go to another game.

By far the biggest difference between what we saw this first week-plus and what we experienced on the PS3 in 2012 was the quality of the stream, both live and recorded. Whereas a digitally messy picture was commonplace before, we were consistently treated to true high-definition picture on the PS4 and Xbox One.

As with any streaming it wasn’t flawless — the Xbox One would get a weird bar of colour or the picture would freeze, and the PS4 would do a little déjà vu stutter and replay a few seconds of action to get the HD signal back — but it was light years ahead of where it was two years ago. Assuming you’ve got any kind of decent high-speed Internet, you’ll be enjoying a quality picture the vast majority of the time.

As a service, MLB.TV Premium is a tremendous value for any baseball fan. When comparing the PS4 and Xbox One versions of the application, however, it’s a landslide victory for the PS4. If you have the option to stream through your PS4, do it.

Now it’s your turn. Let us know in the comments below what you think of this application.

Crave more in-depth Fantasy analysis? Then join us every Thursday at 9 p.m. EST for RotoRob’s Fantasy Baseball Weekly Podcast on Blogtalkradio as we entertain and edify you for an hour or more each week. We’re off this week because of the NHL Playoffs, but may return on April 24. Tune in here.