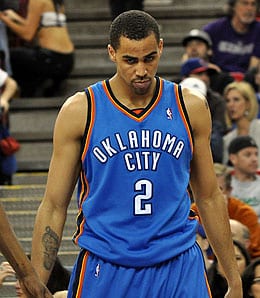 Thabo Sefolosha has been flashing some offensive skill lately.

Well, we’re at the All-Star break, which besides providing us with plenty of defense-free hoops to watch, affords us the time to consider what our teams need for the stretch run. So while everyone else is watching the three-point contest, you can be mining the wire. And that’s where we come in.

Laker GM Mitch Kupchak denies there’s any truth to the Dwight Howard for Rajon Rondo trade rumours; LeBron James doesn’t want to be judged based on his jewelry (or lack thereof); and Carmelo Anthony’s arm contusion will not keep him from starting the All-Star Game on Sunday.

Avery Bradley, PG, Boston Celtics: Last month, we recommended Bradley as a wire pickup, but he’s even more attractive an option now that we know that Rondo won’t be back in Celtic green until next season (if at all — see above for details). Bradley got enough PT in January to be useful, and although he’s not shooting as well so far in February, as the starting PG, his minutes are up even more. He’s getting more touches recently and overall has become a bigger part of the Boston offense this season. Bradley, who is headed to Puerto Rico for the break, is widely available, but we predict he’ll be a very popular pickup in the coming weeks.

Mario Chalmers, PG, Miami Heat: In December, we gave a nod to Chalmers and while he didn’t sink more buckets that month, his PT rose in January and is up a touch more this month. Need treys? He’s averaging two per game over the last five as the starting PG in Miami. There’s no doubt that Chalmers hasn’t been as effective as he was last year, but he’s definitely picking up the pace of late, so give the former Jayhawk star a look if you need backcourt help.

Thabo Sefolosha, SG, Oklahoma City Thunder: Sefolosha is known as one of the top defenders in the game, but he’s also shooting extremely well lately, so consider him a look as he’ll provide a little bit of everything.

Corey Brewer, SF, Denver Nuggets: In mid-December, we gave Brewer a shout out, and while he shot very well that month, he didn’t get as many touches in January. He’s struggled from beyond the arc in February, but is definitely worth another look as recently he’s been starting for Denver’s leading scorer, Danilo Gallinari, who has been sick. As long as Gallinari and Andre Iguodala remain out, Brewer will be in line for extended minutes, making him a fine short-term add. The Nuggets are short-handed right now, creating opportunities for role players like Brewer, and it’s quick pluck and plays like this that can steer you to Fantasy glory.

Charlie Villanueva, PF, Detroit Pistons: Two seasons ago, we expected Villanueva to be a top 30 power forward, but he’s pretty much fallen off the Fantasy map since then. But now, with Andre Drummond out, Charlie V is seeing more PT and he’s responded, playing the hero last Saturday with a big trey and pulling down a season-high 13 boards. He’s worth a look in deeper formats, especially if you need help in three-pointers. As mentioned, Villanueva has become a forgotten man in Detroit the past couple of seasons as he’s been relegated to a bench role, but suddenly he’s turning in his best work since becoming a Piston, so sharp owners will try to take advantage of the situation.

DeMarre Carroll, SF, Utah Jazz: The fourth-year man is getting burn with Gordon Hayward out, reaching double digits in points in every game except one so far in February.

John Salmons, SF, Sacramento Kings: Salmons went off for 23 points Wednesday, and while his shooting touch has cooled since then, he is getting the PT, so consider him an option in deeper formats.

Jason Thompson, C/PF, Sacramento Kings: Back in mid-December we recommended Thompson as he was enjoying a superb month despite less PT. After some nice games early in January, he went into the tank, but has busted his slump in a big way so far in February and is seeing his most action of the season. Thompson heads into the break having scored in double digits in five straight games and as notoriously streaky as he is, you’ve got to grab him now. He’s still unowned in about two-thirds of leagues, but won’t be for long if he continues to light it up.

Jermaine O’Neal, Phoenix Suns: It’s been over two years since O’Neal last popped up on the Fantasy radar as a waiver wire choice, but he ended the first half looking strong. On Tuesday, JO recorded his second double-double of the season and swatted five shots, giving him nine blocks over the past three. He’s getting more minutes as the top big off the bench and his recent play indicates that it’s not quite time to stick a fork in the 16-year vet.

Lavoy Allen, PF/C, Philadelphia 76ers: The dude lacks consistency (a career-high 22 boards Saturday, but just two on Monday), but Allen is seeing more action with Thaddeus Young out, so give him a gander.

Tyler Zeller, Cleveland Cavaliers: Zeller certainly didn’t comport himself well in the Rising Stars Game Friday, but he snapped a scoring slump in the final game before the break and could be poised for a larger role in the second half.