The Wire Troll: The All Nordic Edition 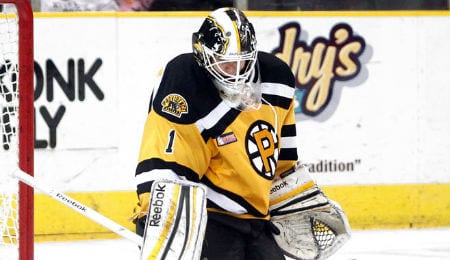 Niklas Svedberg has run with the back-up job in Beantown. (NHL.com)

By RotoRob and Dakota Case

Welcome to the 2014-15 season debut of The Wire Troll, our weekly waiver wire recommendations column. We’d like to begin by thanking Chris Wassel for all his amazing work over the years and wish him well as he moves onto other ventures. Our former NHL Editor will be sorely missed.

This week, Milan Lucic apologized for being a douchebag; the Islanders finally lost; and Jonathan Toews scored a huge short-handed goal in overtime to keep the Hawks without a regulation loss.

Now let’s get to this week’s picks.

Niklas Svedberg, G, Boston Bruins (ESPN: 12.2 per cent; CBS: 17 per cent): With Tuukka Rask off to a shaky start, Svedberg has seen more action than expected, and he’s been up to the challenge. Svedberg has been off the Fantasy radar until now, but he looked phenomenal in shutting out the Sabres Saturday — in just his third career start. Need a backup netminder? He proved he could make saves in the AHL (see video below), now he’s doing the same in the NHL, so give this unheralded Swedish rookie a look.

Jonas Gustavsson, G, Detroit Red Wings (ESPN: 4.8 per cent; CBS: 17 per cent): We had some worries that Gustavsson may not get his backup gig back once he recovered, but considering how awesome he looked in his season debut Saturday against Toronto, those fears have been allayed. The Monster turned away all 30 shots his former team fired at him, and should Jimmy Howard’s groin injury prove more serious, Gustavsson could find himself in a very prominent role.

Anton Stralman, D, Tampa Bay Lightning (ESPN: 24.3 per cent; CBS: 24 per cent): We expected the Rangers to miss Stralman, but how about what he’s brought to the Bolts? Through five games, he’s already logged four helpers with a +5 ranking. And now that Victor Hedman (hand) could be out for some time, Stralman steps in as the No. 1 blueliner, so expect plenty of PP1 time.

Robin Lehner, G, Ottawa Senators (49.1 per cent; CBS: 39 per cent): In his second start of the season Saturday, Lehner was again superb, stopping 38 of 40 shots for the second straight time. As we alluded to in our Dynasty Rankings in which we slotted Lehner 239th, Craig Anderson’s job is in major jeopardy, so smart owners will claim Lehner while they still can. It’s not that Anderson has struggled — he’s actually been very strong — but Lehner has simply been better. It’s a good problem to have for Ottawa.

Jori Lehtera, C, St. Louis Blues (ESPN: 2.4 per cent; CBS: 20 per cent): This Finnish rookie has yet to pop up on the Fantasy radar, but after he exploded for a goal and two assists on Saturday owners will be taking notice. Lehtera is really clicking with winger Jaden Schwartz on the Blues’ second line and with top centre Paul Stastny (shoulder) out on a day-to-day basis, Lehtera should earn more PT. At the very least, Lehtera is someone to keep an eye on this week.

Welcome to “Studs and Duds” 0- RotoRob’s weekly segment on who’s hot and who’s, well, not in Fantasy hockey’s week previous. This week, we’re talking Week One, which is actually more like a week and a half. With that in mind, our studs of the week are made up of the top three players as listed by Yahoo!. Fortunately, for those of us who missed out on the Sidney Crosby Sweepstakes, there are also some surprising sleeper studs you may be able to find in your league. We’ve listed those below our top three studs.

No. 1. Patric Hornqvist, RW, Pittsburgh Penguins: Whoa! That’s right — we had to read that again, too. Four games into his stint with the Pens, life is pretty good for the former Preds forward. With eight points (four goals and four assists) and a plus-2 rating, Hornqvist is Yahoo’s No. 1 ranked player a week and a half into the 2014-15 Fantasy hockey season. Oh, and here’s a fun fact for you – -he’s two spots ahead of Crosby, the 2005 first overall pick, after being drafted dead last (230th overall) that very same year.

No. 2. Darcy Kuemper, G, Minnesota Wild: Speaking of being selected dead last in a draft with Sid the Kid, we were able to snag both Crosby and Kuemper in our Fantasy hockey league this season. Even without Josh Harding, the Wild is off to a very solid start with “the Kuemperor” in net. In three games, Kuemper is 2-1-0 with a 0.67 goals against average, a .972 save percentage and two shutouts in the process of shattering Niklas Backstrom’s franchise shutout record of 157:44 with a 163:46 perfect streak to start the season.

No. 3. Sidney Crosby, C, Pittsburgh Penguins: It wouldn’t be a S&D segment without Crosby, are we right? In four games, he has nine points (four goals, five assists) with a plus-1 rating and is just his usual awesome self. The only reason Crosby isn’t No. 1 in our rankings is because of the number of shots taken, and a few more hits given, by his new teammate Hornqvist. We’re sure he understands.

No. 1. Jake Gardiner, D, Toronto Maple Leafs: A victim of a pair of healthy scratches and inconsistent play, the Maple Leafs rearguard has just one assist and a minus-4 rating in four games. You can bet the Toronto brass is hoping and praying it’s only a matter of time before things click for Gardiner like they eventually did for fellow 2008 first round pick Victor Hedman.

No. 3. Ben Scrivens, G, Edmonton Oilers: Ditto, minus the win, but he’ll take his 4.11 goals against average and .848 save percentage over Smith’s.

By RotoRob
Tags: Milan Lucic
Posted in Dakota Case, HOCKEY, RotoRob, The Wire Troll | Comments Off on The Wire Troll: The All Nordic Edition