The Wire Troll: Taking a Leake 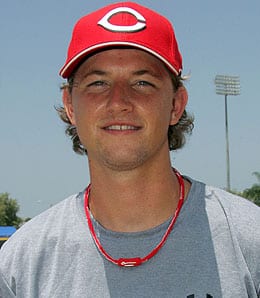 Mike Leake is as green as they come, but he’s got a job for the Reds.

Another season of waiver wire madness is upon us. The first topic of discussion this season is FAAB, the budget system for acquiring free agents. This method of player procurement seems to be gaining in popularity and with it come some interesting questions, especially in single league formats. The principle dilemma here is do you spend early and often, save your money for the trade deadline, or some combination of both. In my opinion, a bird in the hand is much better than the potential for nothing in the bush at the trade deadline. Is it worth taking a chance on two months of potential playing time that might not occur? Spend early and often and procure the players when they are available. Two months of counting statistics is simply not worth the gamble when solid difference makers are available for the taking.

Without further ado, let’s take a look at some of the potential waiver wire acquisitions heading into Week Two.

Mike Leake, Cincinnati Reds, SP: Leake, the eighth overall pick in the 2009 First-Year Player draft, has won the fifth starter gig for the Reds. Heading into this seasonm who would have thought that Leake would be pitching in the big leagues before Stephen Strasburg? A solid 3.00 ERA this spring with 10 strikeouts, combined with the back issues faced by Aroldis Chapman thrust the 22-year-old Leake into his first start Sunday. While he battled control issues in his debut, Leake was definitely effectively wild. He should be owned in all dynasty formats and NL-only leagues and on the radar in mixed formats. The Arizona State alumni is simply that good.

Dallas Braden, Oakland Athletics, SP: Braden got off to a great start with that outstanding seven-inning, 10-strikeout performance against the Mariners. He did post great strikeout numbers in the minors, so a spike in his K/9 isn’t out of the realm of possibility in 2010. The 26-year-old southpaw managed a solid 3.89 ERA in 22 starts in 2009 before being shut down with a rash on his left foot and ankle and makes for a great early acquisition in all league formats.

Kelly Johnson, Arizona Diamondbacks, 2B: It appears that the change of scenery has done nothing but good early on this season for Johnson. He is currently sporting a .357 BA with two homers and three RBI and given that he’s batting at the top of the Diamondback order, he’s afforded great opportunities for runs scored. Johnson has done it before, looking back to those 2007 and 2008 seasons, and a return to form this year is a distinct possibility. If he’s currently available in your league grab him quick before he’s gone.

Chris Young, Arizona Diamondbacks, OF: In his first five games this season, Young has slugged two homers, driven in seven runs and, more importantly, only struck out twice. Sure it’s early, but you have to remember that he has hit for power in the past and once was one of the top young players in the game. It appears that he’s found some semblance of strike zone judgment, the flaw that was the cause for his demise into the ranks of the undrafted this past spring. He’s currently worthy of a waiver wire bid in all formats.

Colby Lewis, Texas Rangers, SP: Did I mention that I really liked Lewis’s chances for success this season? In his first start Friday, he held the Mariners in check to the tune of one run over seven innings, earning his first major league win since 2004. The success he enjoyed in Japan has translated very well for the Rangers so far. If you’re not playing in leagues that I’m partaking in, Lewis is probably available on the waiver wire and a solid matchup against the week-hitting Indians this week bodes well for his chance to get that second win of the young season.

John Bowker, San Francisco Giants, OF: In 2009, Bowker hit 21 homers, drove in 83 runs and stole 10 bases in 366 AB at Triple-A. He also managed to hit for an incredible .342 BA. Bowker beat out Nate Schierholtz for the job this spring but his position as an everyday starter is still somewhat precarious in San Francisco. He should be added in all NL-only formats and put on the radar in mixed formats pending his playing time opportunities.

Rick Ankiel, Kansas City Royals, OF: The one thing that is pretty much a given is that Ankiel will have playing time opportunities in Kansas City. In 413 at-bats in 2008 he managed to mash 25 homers, so it’s not like he hasn’t had success in the past. Ride Ankiel in all formats while he’s hot as his past history with rather poor contact rates suggests that it might not be a long ride, at least from a batting average perspective.

Daric Barton, Oakland Athletics, 1B: Mr. Moneyball is earning his keep thus far in 2010, driving in seven runs for the A’s to rank second in the early AL RBI race. Sustainable? Certaintly not. But it appears that the push from Chris Carter this spring has had a positive effect on Barton. His ability to take a walk makes him a must own in leagues using OBP as a counting stat, and — of course — in AL-only formats.

Casey Kotchman, Seattle Mariners, 1B: Someone has to be driving in both Ichiro Suzuki and Chone Figgins and the current hot hand is Kotchman. The Mighty Casey has the job in Seattle and should post solid numbers while batting in the heart of that lineup. He should be rostered in AL-only leagues and on the radar in mixed formats.

LaTroy Hawkins, Milwaukee Brewers, RP: Hawkins is off to a great start this season. In three IP, he has allowed one hit and one walk while fanning six. Incumbent closer Trevor Hoffman isn’t getting any younger and Hawkins makes for a great addition in all leagues counting holds or as Hoffman insurance in the event that age finally starts catching up to the former Padre great.

Jim Johnson, Baltimore Orioles, RP: The pre-season conundrums of Mike Gonzlaez have now lingered into the regular season. In three games this week, Gonzalez has allowed five hits, four walks and already has a pair of losses to show for his efforts. Baltimore is removing him from the closer role in an attempt to get these issues resolved. In the interim, Johnson appears to be the front runner for saves, but his track record is less than stellar, to say the least. If you’re chasing saves in your Fantasy league, grabbing Johnson is the best current option in Baltimore. Be prepared for a very long season, Oriole fans.