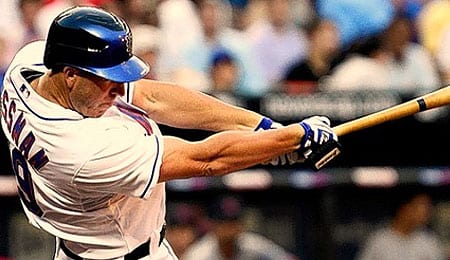 With most minor leagues kicking off Thursday, we thought we’d check in with our season debut of Minor Matters, our periodic column that will keep you abreast of Fantasy worthy happenings around the minors.

Remember Mike Hessman? The Atlanta Braves’ 15th round pick in 1996 has periodically popped up in the Show, spending parts of five seasons with Atlanta, Detroit and the Mets. During his brief looks in the bigs (109 career games), he’s occasionally flashed that prodigious power (five homers in 27 at-bats with the Tigers in 2008), but more often proved he can’t make contact (23 strikeouts in 55 at-bats with the Mets in 2010, the last time he was spotted in the majors).

Fantasy value — at least that of the lasting nature — has never found its way to Hessman.

Well, bash on the third baseman does.

Obviously miffed by McLeod’s snub, Hessman toiled for the Astros’ Triple-A team last year and this real-life Crash Davis smacked 35 dingers, giving him a career total (as of the end of 2012) of 364 home runs in 16 minor league seasons — 254 at the Triple-A level. Wow.

He is the current active career leader in minor league home runs.

Despite Hessman’s assault on Triple-A pitching last year, the Astros never gave him a sniff, because — as we all know — they couldn’t use any power in their lineup.

Hessman, who turned 35 last month, has moved on to the Cincinnati Reds organization this year and all he did on Thursday in his debut for Louisville was go 2-for-3 with two solo home runs.

He may never resurface in the majors, but the fact that we’ve never mentioned Hessman in these pages needed to be rectified considering what he’s accomplished.