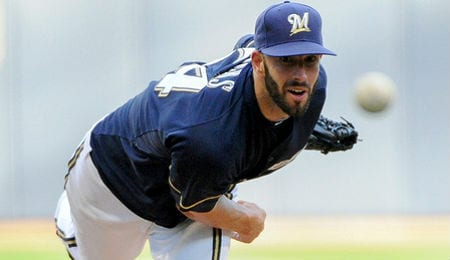 Mike Fiers showed how dominant he can be last week. (Fanduel.com)

It’s too bad Mike Fiers had already thrown 106 pitches through six innings on Thursday. Otherwise, who knows how many strikeouts he could have racked up? With 14 punchouts through six, Fiers proved that he’s not only worthy of the Brewers’ rotation, he may be worthy of your’s, too.

Mike Fiers, SP, Milwaukee Brewers (ESPN: 23.4 per cent owned; CBS: 53 per cent): Fiers’ ESPN ownership has spiked recently, and rightfully so. His last two starts have been brilliant, as he’s racked up 19 strikeouts in 14 innings while allowing just one earned run. You may scoff at Fiers dominating the Cubs (see his final whiff of the game against them in the video below), but his previous start was against the Dodgers.

Matt Shoemaker, SP, Los Angeles Angels (ESPN: 21.3 per cent owned; CBS: 45 per cent): Shoemaker’s availability is almost stunning considering how magnificent he’s been this year, going 11-4 with a 3.84 ERA in 21 games (14 starts). More recently, he was 3-0 with a 1.71 ERA over his previous four appearances before Saturday, when he earned another win, just missing another quality start.

David Peralta, RF, Arizona Diamondbacks (ESPN: 16.1 per cent owned; CBS: 36 per cent): Peralta is having a very solid rookie year despite playing in complete anonymity in the desert. He’s cooled off somewhat in August, going 14-for-57 (.246), but has two homers and 11 RBIs. The Venezuelan beanpole has provided decent numbers in runs, modest pop, nice production and modest speed. If Peralta can get his walk rate back up to where it was in Double-A, we’ll really be onto something here.

Caleb Joseph, C, Baltimore Orioles (ESPN: 8.4 per cent owned; CBS: 27 per cent): Joseph, a career minor leaguer until Matt Wieters went down with an elbow injury earlier this season, tied a franchise record by homering in five straight games earlier this month, and while you will likely never see that again as long as you live, Joseph has more than held his own since taking over as the primary catcher in Baltimore. Joseph has gone deep eight times this year and has improved monthly, batting .271 in July and .314 in August after a dreadful start.

Carl Crawford, OF, Los Angeles Dodgers (ESPN: 46.2 per cent; CBS: 33 per cent): When’s the last time this former Fantasy first round staple was available on the wire? Well, while CC’s baby mama was looking fine, he was struggling with injuries and serious ineffectiveness. Well, after hitting all of .163 in July, Crawford is stroking the ball to the tune of a .315 BA so far this month thanks to a dozen hits over the last seven games. Better yet, his speed is re-emerging, with three thefts in the last four games. Crawford has never looked worse than he has this season, but he looks poised for a big finish.

Pat Neshek, RP, St. Louis Cardinals (ESPN: 22.6 per cent owned; CBS: 17 per cent): Neshek is having a season for the ages (5-0, 0.88 ERA), finally getting touched up for a run on Friday in just his second non-scoreless appearance since June 3. However, with normal Cardinal closer Trevor Rosenthal being erratic, Neshek picked up his fourth save and could see a few more before the year is out.

Jonathan Schoop, 2B, Baltimore Orioles (ESPN: 4.8 per cent owned; CBS: 12 per cent): Schoop will not be yielding any playing time to Ryan Flaherty with Manny Machado on the disabled list, and he has shown a knack for the big home run this season. He has three multi-hit efforts in his last seven games and has 11 homers and 32 RBI on the year, an effort that has seen him surpass our projections for him as someone outside the top 45 in our Second Base Rankings. For our money, he’s been nearly a top 35 player at the keystone corner.

Travis Snider, RF, Pittsburgh Pirates (ESPN: 9.4 per cent owned; CBS: 11 per cent): Someone opined that Snider would be a breakout player this year, and at long last the former Blue Jay is starting to make that individual look at least a little smarter. Hitting safely in nine of his last 10 games, Snider has three homers and 10 RBI in August. He’s been getting a chance to play more lately and has responded, reaching double digits in dingers for the second time in his career.