The Wire Troll: Waiver Picks and a Turkey 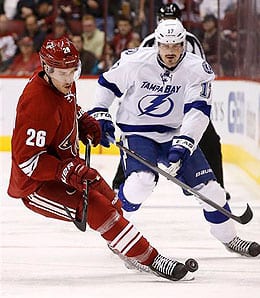 Michael Stone (left) has been racking up goals for the Coyotes. (AP)

This week we are thankful for many things and though this will not quite be the normal edition of The Wire Troll, there will still be a few picks to help you beat the stuffing out of your competition. Please also note that Week Nine has a bit of a funky schedule.

This likely goes against everything conventional about Fantasy hockey, doesn’t it? There are four big nights this week and that usually does not typically happen. Please remember that Tuesday, Thursday, and Sunday feature six games combined. Planning your team is almost as much of a priority this week as the talent your team possesses.

Let’s have a little fun and scour the wire in this week’s edition of The Troll. Maybe we’ll find a gem or two along the way.

Nail Yakupov, RW, Edmonton Oilers: A little winning does a team wonders and boosts a player’s confidence. Yakupov has points in four straight games and five points this week, including a gorgeous set-up for Sam Gagner’s first of the season (see video below). There was really no way that the talented winger would continue to play this poorly forever. The power play points have suddenly come along with even some decent defensive play. A little confidence often goes a long way and the schedule also helps. Expect Yakupov’s production to slide back a bit but not like it was.

Michael Stone, D, Phoenix Coyotes: Stone is one of those players that has a nice shot, but his passing is an iffy proposition at times. The defenseman has a goal almost every other game and does get about two shots a game on the net. That may not mean much, but at the very least he is relatively effective. Stone is another one of those guys owned in 15-to-25 per cent of leagues that is a slightly risky short-term buy.

Scottie Upshall, RW, Florida Panthers: The Panthers fired Coach Kevin Dineen and then the offense came back… sort of. Upshall has four points in his last four games and Florida is at least showing signs of life. Granted, Upshall is extremely streaky, but someone in Florida has to help Aleksander Barkov and Jonathan Huberdeau. That player may be Upshall. With his low ownership rate, it is a low risk investment.

Frederik Andersen, G, Anaheim Ducks: With the injury to Viktor Fasth (out 3-to-4 weeks), Andersen is going to see some starts because it just seems Anaheim has problems with the health of their goaltenders. Andersen’s six wins in six starts is impressive but that .943 save percentage stands out. He and John Gibson may just be the two best goalies in the Anaheim system. It is pretty scary for the rest of the NHL, but it may be true. At least, you may get four or five starts from Andersen and that is not too shabby.

The One That Got Away?

Damien Brunner, RW, New Jersey Devils: Ouch! The start was great with five points in five games and then it fell apart and now the shots do not even hit the net. Again, Brunner may get his groove back, but the question is when? It may be best to just declare this one a disappointing waiver wire pick. Maybe Brunner will figure out that he has to play at least a little bit physical so keep an eye on the winger, but that is about it.

That is it for now. Happy Thanksgiving to all our U.S. readers from The Wire Troll and enjoy the turkey, stuffing, and all the trimmings. As always, you can follow me @ChrisWasselTHW and thanks for reading.

Now it’s your turn. In the comments below, let us know who your favourite Fantasy hockey waiver wire pick of the week is.