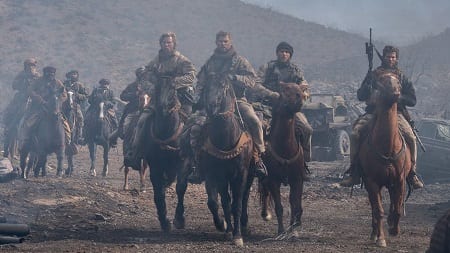 The squad’s sudden ability to ride competently is never explained.

Veteran producer Jerry Bruckheimer has overseen dozens of films, most of which have an action slant, but his last dip into war movies brought us the excellent Black Hawk Down — a movie that not only washed away much of the stink of Pearl Harbor, but in many ways created the blueprint for many modern war films with its ensemble cast and dedication to grittier, more realistic combat. His latest endeavour is 12 Strong, based on the nonfiction book Horse Soldiers.

In the aftermath of 9/11, Captain Mitch Nelson (Chris Hemsworth) requests he be reinstated from a staff job to his former role as head of the Green Beret unit 595. After some initial blow back he’s given his old command, including the returning Chief Hal Spencer (Michael Shannon), who was set to retire before the terrorist attack.

Nelson and his team are dispatched to Afghanistan where they are eventually selected to fight alongside Abdul Rashid Dostum (Navid Negahban), who leads a Northern Alliance group, against the Taliban. Their goal is to retake the city of Mazar-i Sharif and do so before the weather turns and prevents their advance by stranding them in the mountains. Making things worse, the 12-man team must travel via horseback due to the terrain, something only Nelson is proficient in.

To succeed they’ll need to not only navigate the mountains but also the complex relationships between Nelson and Dostum as well as the Northern Alliance groups with one another. As time runs out the need to push forward to give the U.S. a foothold in Afghanistan gets more pressing as does the desire to give all the Americans back home a much-needed victory.

12 Strong is anchored by a pair of accomplished actors in Hemsworth and Shannon, both of whom deliver solid performances to provide whatever level of emotional grounding the film ends up creating. Shannon is underused, spending much of his time apart from Hemsworth to anchor the “B team” portions, but he’s good when on screen. As for Hemsworth, it’s refreshing to see him outside the realm of the Marvel Universe.

While there isn’t a ton of action, especially relative to the trailer, what’s there is well done and packs plenty of intensity. The film’s final encounter is the best of the bunch, even though it likely took some liberties with how much action the team saw and the nature of their charge on horseback through seemingly insurmountable odds. It has a very Hollywood feel.

As noted, 12 Strong is based on real events, so the filmmakers were limited in what they could do. It seems a bit weird, however, to try to strike such an uplifting, patriotic tone given what preceded the mission (9/11) and what has followed it (a decade-plus conflict that still had no end date). That’s not to diminish what these soldiers were able to accomplish, but maybe a more reserved approach with a greater focus on the people would’ve worked better.

Unfortunately, outside of the odd bit of jocularity between the troops, there’s precious little character or relationship development between anyone other than Nelson and Dostum. Instead, the soldiers are given, at best, a distinguishing trait: there’s the funny one (Michael Pena), the one with nice hair, guy with glasses, guy that befriends a local boy and so on. Those personal connections, and the part where they learn to ride the horses the book is named after, are swept aside for big explosions.

Although the action is presented in a satisfying way, it’s often unclear what’s going strategically, by which we mean the squad’s primary goal in combat is to paint targets so that air support can drop bombs on them. So why then do they later need to charge a missile launcher on horseback rather than calling in another air strike? It’s possible an explanation is given, but if so, we missed it amid the fighting. Lastly, the way the movie creates a “villain” for the heroes to battle is beyond cliche.

There are just two extras, a catch-all “making of” that interviews some of the real people involved in the op along with how they went about putting everything together, and a featurette about the horse soldier statue. Probably the most interesting moments in the 30 or so minutes are the soldier interviews, but it’s a forgettable offering.

As a historical operation, 12 Strong is rather remarkable. As a film, it’s far less so. Bruckheimer would’ve done better to tell this story on the micro level, focusing on the soldiers’ feelings in the wake of 9/11 rather than using it as a backdrop to blowing stuff up.