The Wire Troll: Young Hurlers on the Way 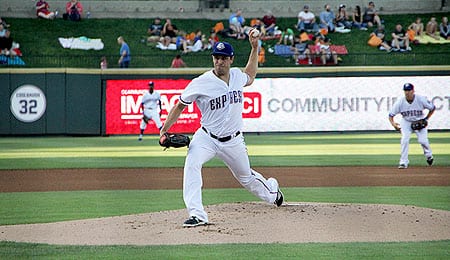 Michael Roth could return to the majors soon. (OurSports Central)

Welcome back to another week of Fantasy baseball. We’re now into mid-July, in the midst of All-Star week, and firmly into the second half of the season. Keep pressing the right buttons.

This week, Jesus Aguilar and Jean Segura were voted into the All-Star Game as the final roster spots in each league; Ken Giles has pissed off A.J. Hinch enough to earn a trip to the minors; and the Phillies adjusted their rotation so that Aaron Nola can pitch in the All-Star Game.

Michael Roth, SP, Texas Rangers (ESPN: unowned; CBS: unowned): If Texas winds up peddling Cole Hamels at the deadline, it could open up a rotation spot for minor league veteran Roth. A ninth round pick by the Halos way back in 2012, Roth has spent parts of three seasons in the bigs, pitching mostly in relief, but hasn’t seen any action since 2016. This year, he posted a solid ERA at Triple-A for Iowa before getting dealt to the Ranger organization in late-May. Since then, Roth has been more hittable, but overall he’s already nearly matched his Triple-A win total from 2017. As mentioned, the lefty has mostly worked out of the pen as a big leaguer, but could get a look in the rotation this year if the Rangers make a deal. South Carolina native (and former Gamecocks star… see video below) Roth has twice been a double-digit winner in the minor leagues. Although no longer a prospect, he’s worth tracking for the second half.

Kyle Muller, SP, Atlanta Braves (ESPN: unowned; CBS: 1 per cent): Here’s a kid that hasn’t quite started to pop up on the Fantasy radar, but his performance this season will change that — at least from a Dynasty league perspective. Atlanta’s second rounder from 2016 began the season at Class-A, going undefeated with a stellar 2.40 ERA through 30 innings. It was enough for the Braves to fast track Muller to High-A, where his hit rates are up, but he still hasn’t been taken yard through 11 starts and 61 1/3 IP. Coming off a seven-inning, 12-strikeout shutout performance, he could soon be ready for Double-A the way things are going. This lefty can be dominant, and needs to be plucked in Dynasty formats.

Niko Goodrum, 2B, Detroit Tigers (ESPN: 12.3 per cent; CBS: 22 per cent): You may recall that Goodrum dealt with heat exhaustion in late-May. Now, pitchers are getting exhausted by how hot he is — he’s batting .367 with five RBI in the last week, and .413 so far in July. Heading into action Friday, the rookie had hit safely in five straight games, and while he’s striking out more than we’d like, we really love his gap power. Since taking over the everyday second base job in Detroit, Goodrum has been a revelation, and needs to be scooped up in AL-only and deeper mixed leagues.

Enyel De Los Santos, SP, Philadelphia Phillies (ESPN: NA; CBS: 17 per cent): This Dominican rookie looked sharp in his MLB debut, making a spot start on Tuesday and earning the win with a quality start, fanning six over 6 1/3 IP. If you’re seeking sleeper second half hurlers, De Los Santos makes for a fine pickup. Acquired from the Padres for Freddy Galvis last offseason, De Los Santos has been lights out at Triple-A (1.89 ERA over 16 starts). De Los Santos has been sent back to Triple-A for now, but he’ll be back — sooner rather than later — likely for a longer look.

Anibal Sanchez, SP, Atlanta Braves (ESPN: 22.1 per cent; CBS: 39 per cent): Sanchez has been a wonderful surprise in the Braves’ rotation this season. Yes, he’s battled health issues (some things never change), but has been really strong while active, most recently holding Arizona to five hits and a run over six innings Friday, and limiting the powerful Brewers to just two hits and one earned run over 6 2/3 IP last Saturday to earn his fourth win of the season. Considering Sanchez had a 6.41 ERA last year, spent mostly in the Detroit rotation, his bounce back this season has been nothing short of miraculous. His 1.02 WHIP is a career low, and he continued to show splendid command Friday (six Ks, zero walks).

Christian Bergman, SP, Seattle Mariners (ESPN: 0.5 per cent; CBS: 1 per cent): Bergman was brought up to make a spot start Friday, and it went about as well as you’d expect a Coors Field outing to go. However, with James Paxton landing on the DL, Bergman will likely stick around, and don’t forget how well he did in his season debut in mid-May (seven shutout innings, two hits, no walks, five strikeouts). Originally a Rockies pick (24th round in 2010), Bergman showed he can still swing the bat, with an RBI single on Friday. His WHIP wasn’t exactly promising in Triple-A, but should he get a favourable matchup, he’s worth streaming in AL-only leagues.

By RotoRob
Tags: Michael Roth
Posted in BASEBALL, RotoRob, The Wire Troll | Comments Off on The Wire Troll: Young Hurlers on the Way