The Wire Troll: Michael Morse Turning on the Power 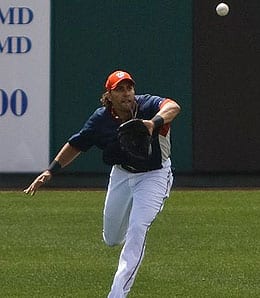 Michael Morse’s value has spiked thanks to Adam LaRoche’s injury.

It has been a week from hell for Fantasy owners as injuries continue to mount and wreak havoc on our rosters. Last week we saw Buster Posey (broken leg and strained ankle ligaments), Jorge De La Rosa (torn UCL) and Adam LaRoche (labrum tear and additional tearing of the rotator cuff) all hit the DL, likely for the season. Wandy Rodriguez, Brian Roberts and Nate McLouth also found their way to the DL with various ailments. When you add in the numerous walking wounded already on the DL, the waiver wire becomes even more important in plotting your course. With that in mind, let’s get to this week’s Troll and attempt to fill in some of the holes in your Fantasy rosters.

Michael Morse, 1B/OF, Washington Nationals (CBS: 38 per cent owned, Yahoo!: 24 per cent): Who doesn’t need a boost in their power numbers in 2011? Last week, Morse homered in four consecutive games and drove in nine runs. The power will be there as evidenced by his 15 homers in 266 at-bats in 2010 and LaRoche, if he comes back at all this year, is going to be a shadow of his past with the serious shoulder woes. Find a home for Morse in all leagues.

Eric Young, Jr., 2B, Colorado Rockies (CBS: 26 per cent, Yahoo!: 4 per cent): The name of the game with Young is speed and he brings that to the table in a big way. His problem has been getting on base and in past auditions with the Rockies he’s struggled mightily. As they say, you simply can’t steal first. So far this season at Triple-A Colorado Springs it’s been a bit of a different story. Young was 17-for-18 in the stolen base department and had walked 32 times versus 27 strikeouts in 160 at-bats. A .462 OBP at Triple-A bodes well for his success in the lead-off role for the Rockies.

Ryan Rayburn, OF, Detroit Tigers (CBS: 28 per cent owned, Yahoo!: 27 per cent): The trade of Scott Sizemore to the Athletics has opened an opportunity at second base and the Tigers are committed to giving Raburn every opportunity to hold down the fort in the middle infield. He’s going to have a rather lengthy trial at second as the Tigers attempt to spark a rather anemic offense and get Raburn’s bat going. Over the past two seasons, he has mashed 31 homers in 632 at-bats and that kind of pop out of a player that will soon qualify at second is gold.

Juan Nicasio, SP, Colorado Rockies (CBS: 12 per cent owned, Yahoo!: 0 per cent): Nicasio’s debut was certainly effective as Jaime Garcia of the Cardinals totally imploded Saturday. Not to take anything away from Nicasio’s solid debut, but the Colorado offense handed him the W on a silver platter, scoring 15 runs in a total smack down. In 56 2/3 IP at Double-A Tulsa, he allowed 48 hits and 10 walks while fanning 63 and earning five wins with an outstanding 2.22 ERA. With De La Rosa gone for the season, Nicasio will get a rather lengthy audition in the Mile High City.

Juan Miranda, 1B, Arizona Diamondbacks (CBS: 11 per cent owned, Yahoo!: 6 per cent): With Russell Branyan now out of the picture, the at-bats should be there for slugging 28-year-old Miranda. Last week, he smacked three homers and drove in nine runs. Any player that has the potential to generate power numbers has to have our attention this season.

Rubby De La Rosa, SP, Los Angeles Dodgers (CBS: 6 per cent owned, Yahoo!: 1 per cent): The Dodgers pen is an unmitigated disaster and 22-year-old De La Rosa has been recalled to fill a middle relief role. A starter at Double-A Chattanooga, he amassed 52 punchouts in 40 IP and has the potential to slide into a more valuable role in LA’s bullpen.

Jeff Keppinger, 2B, Houston Astros (CBS: 1 per cent owned, Yahoo!: 1 per cent): Clint Barmes, Bill Hall, and Chris Johnson haven’t been overly productive so expect Keppinger to play the role of super sub and steal at-bats all over the rather middling ‘Stros infield. Last year, Keppinger hit six homers with 59 RBI and a solid .288 BA in 514 at-bats. Don’t let him slip through the cracks in NL-only formats.

Josh Reddick, OF, Boston Red Sox (CBS: 2 per cent owned, Yahoo!: 0 per cent): In his brief fill-in for the injured J.D. Drew, Reddick is now 4-for-8 with three RBI and a stolen base. In 165 at-bats for Triple-A Pawtucket, Reddick slugged 12 homers. How long do the Sox continue to roll out the ineffective Drew?

Brandon Belt, 1B, San Francisco Giants (CBS: 45 per cent owned, Yahoo!: 7 per cent): What are the Giants doing? They have a kid that was absolutely destroying pitching at Triple-A and they bring him up to play occasionally and ride the pine. Has Manager Bruce Bochy looked at the numbers from Pat Burrell, Cody Ross, and Aubrey Huff lately?

Josh Outman, SP, Oakland Athletics (CBS: 6 per cent owned, Yahoo!: 2 per cent): Outman was called up to replace the injured Brandon McCarthy (shoulder). In his first full season since returning from Tommy John surgery, Outman has been having control issues — something that isn’t out of the norm for those recovering from this procedure. In eight starts and 37 2/3 IP at Triple-A, he allowed 27 free passes. However, we’ve now seen two successful starts from Outman last week for the Athletics, so a gamble in deeper leagues and single formats is warranted — just be wary that it could be a roller coaster ride.

Brandon Crawford, SS, San Francisco Giants (CBS: 5 per cent owned, Yahoo!: 0 per cent): In just his third big league at-bat, Crawford slugged a grand salami for the Giants last week. It’s a long way from High-A San Jose, but he should get playing time until Mike Fontenot and Pablo Sandoval return from the DL.

Yunesky Maya, SP, Washington Nationals (CBS: 2 per cent owned, Yahoo!: 0 per cent, 100 per cent owned by Tim McLeod): Formerly the top pitcher in the Cuban leagues, 29-year-old Maya made his 2011 MLB debut Sunday against the Padres, replacing the injured Tom Gorzelanny in the Nats rotation. He wasn’t overly impressive in his debut, but the potential is there. After getting pounded in his first start at Triple-A, Maya bounced back rather nicely and in 59 1/3 IP, allowed 47 hits and 12 walks while fanning 45 and holding opponent to a .214 BA. A successful start Sunday could go a long way towards making Maya a permanent fixture in the Washington rotation.

Casey Blake, 3B, Los Angeles Dodgers (CBS: 13 per cent owned, Yahoo!: 4 per cent): After spending a month on the DL with a staph infection in his left elbow, Blake returned to the active roster Friday and should provide at least interim relief at the hot corner while Fantasy owners wait for the return of Ryan Zimmerman, David Wright, or Sandoval.

Jordan Lyles, SP, Houston Astros (CBS: 12 per cent owned, Yahoo!: 1 per cent): The 20-year-old top prospect has been called up to replace the injured Rodriguez (elbow). In 59 IP at Triple-A Oklahoma City, Lyles allowed 57 hits and 16 walks while putting together a very solid 3.20 ERA. He is a must-own in all dynasty formats, but temper your expectations in mixed formats. It could be a very short stay in the Houston rotation for the young phenom.

Allen Craig, OF, St. Louis Cardinals (CBS: 11 per cent owned, Yahoo!: 6 per cent): In 81 at-bats, Craig has three homers, 17 RBI, four thefts, and a great .321 BA. Better yet, in five-game eligibility leagues he now qualifies at second base. Craig’s ability to play everywhere in the field (except shortstop and catcher), combined with the fact that he’s currently swinging a hot stick should guarantee playing time.

Jordan Schafer, OF, Atlanta Braves (CBS: 2 per cent owned, Yahoo!: 0 per cent): The former top prospect got the call to replace the injured McLouth. The Braves outfield is getting just a tad thin with both McLouth and young Jason Heyward currently sidelined, so Schafer will get playing time — at least in the short term — making him worth a look in NL-only leagues.

Anthony Swarzak, SP, Minnesota Twins (CBS: 1 per cent owned, Yahoo!: 0 per cent owned): Swarzak got the spot start Saturday to replace Francisco Liriano and he took a no-hitter into the eighth inning against the Angels, outdueling Jered Weaver in a no-decision. You have to think that Swarzak has earned another opportunity after that performance, right?

Chris Nelson, 2B, Colorado Rockies (CBS: 1 per cent owned, Yahoo!: unowned): Hot off the wire! The Rockies just called up Nelson Sunday to provide some infield depth. The five homers and and 40 RBI in 197 at-bats Nelson put up at Triple-A makes him worthy of your attention in NL-only leagues.