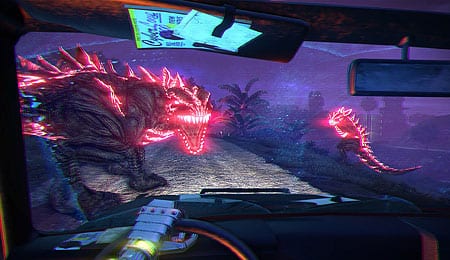 Objects in mirror are closer than they appear.

Science has proven that action movies were better in the 1980s. Names like Schwarzenegger, Stallone, Willis and Van Damme dominated the scene, kicking ass and spouting witty one-liners that in no way felt convoluted (“Stick around!”). Perhaps the most underrated name from that golden era of ass kicking is Michael Biehn, who delivered the goods in both The Terminator and Aliens, not to mention the classic Navy Seals. Well, Biehn is back as Rex “Power” Colt in Ubisoft’s camp-tacular Far Cry 3: Blood Dragon, which aims to capture the spirit of ’80s action in video game form.

If you played Far Cry 3 you’ll find the controls have made the transition, including the sprinting slide and brutal takedown chains involving guns, grenades and even shurikens this time around. Precise aiming on the move is still a little dicey, and vehicular driving is actually worse due to the limited vision you’ll have courtesy of the filters. Still, everything functions well enough to keep the action fun and frantic.

In a nutshell, Blood Dragon is Far Cry 3 re-skinned with all manner of neon effects, while mutated versions of animals and giant dragons that shoot lasers from their eyes roam the island. It makes for a very cool and unique look, though there are times when the overall darkness makes it more stylish than functional. Enemy cyborgs have a limited variety, but turning them into splatters of blue goop never seems to get old no matter how many of them we kill.

Ironically, it’s the decidedly retro scenes that really stand out. Starting with the title screen, all the storyline advancement is done with 8-bit visuals. We don’t want to spoil any of the laughs, but special mention should be made for the training montage and “romantic” segments. If you spent any time playing games during the NES era you’re sure to enjoy them.

Biehn does a nice job hissing one-liners and ’80s clichés, making plenty of not-so-subtle references to films and other games. The real star of the game’s presentation, however, is the soundtrack, which mimics the music of the era so seamlessly it feels like it was taken directly from it. You’ve heard these tracks before… even though you really haven’t. My lone complaint is that Colt’s quips eventually start to repeat quite liberally, which robs them of their charm.

Set in the post-apocalyptic future of 2007, Far Cry 3: Blood Dragon casts you as cyber-badass Rex “Power” Colt. You and your partner Spider are sent to an island to investigate your mentor, Colonel Sloan. Intel indicates he has gone rogue, but you know this man. He’s a patriot. There must be some mistake. The whole setup is dripping with ’80s formulas to fantastic results — the opening moments ripped straight from Predator are guaranteed to get you in the right mood.

Needless to say, Sloan has indeed turned on his country and is now out to destroy the world unless you can stop him. The game’s setup is identical to Far Cry 3 in that you’ll be overthrowing garrisons, tracking down collectibles, hunting animals and doing side quests in an open-world setting. You’re free to tackle them in any order you see fit, and you’re also able to return to the island after completing the campaign to find items you may have missed or to complete side missions.

All actions earn experience points, which will level up Colt and unlock pre-determined bonuses along the way. Completing side missions and collecting things like VHS tapes and TV sets will also open up the opportunity to purchase attachments for your arsenal. Some of these add-ons are fantastic and really provide an over-the-top feel to the gunplay. My personal favourite was explosive sniper rounds — they deal crazy damage and make for some awesome moments.

Unfortunately, the main story of Blood Dragon isn’t particularly long, and while we’ve always enjoyed tackling every ounce of available content in a game like this, it is possible to blow through the story in an evening or two at the most. There is no multiplayer component, online or otherwise, and for those that invested a lot of time in Far Cry 3 you’re in for a nearly identical, albeit streamlined, gameplay experience.

Gamers of our ilk are the target audience for Far Cry 3: Blood Dragon, which presents its tale without so much as a wink or a nod — it plays it straight and expects you to get the referential humour. It’s by no means the first game to take this approach, but (*cue Joe Esposito*) it might just be the best around. If you’re a fan of ’80s action this is a must own.