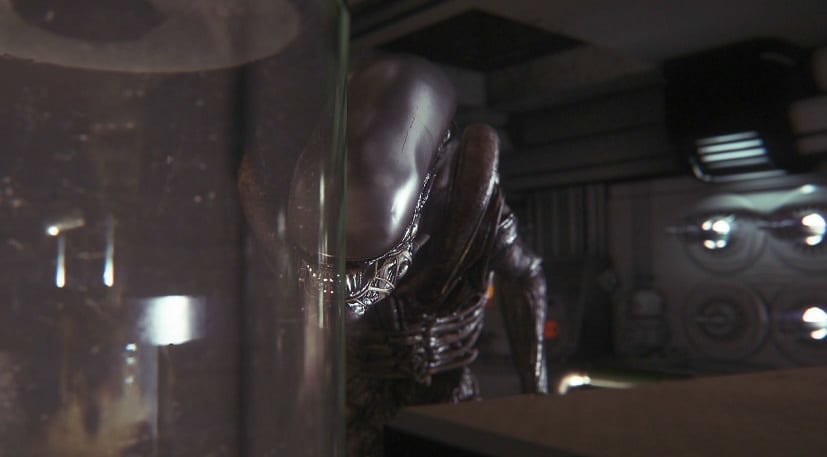 Hope for the best, expect the worst. That Mel Brooks quote could accurately sum up the feelings of most Aliens fans when it comes to game adaptations of the beloved films. The last time hopes were raised the result was Aliens: Colonial Marines, a generic shooter that fell so short of expectations that there’s still pending litigation about who was at fault.

One half of that lawsuit, SEGA, is back for another attempt. This time it’s teaming up with veteran developer The Creative Assembly, best known for its work on the Total War series, for Alien: Isolation, a game based on the Ridley Scott original. Logic suggests James Cameron’s action-filled sequel would be better source material, but let’s see what we’ve got here. Hope for the best…

For a game that isn’t heavy on action, Isolation features a very busy controller. Crouching, sprinting, hiding, aiming and hacking make up just a portion of your activities. Generally speaking the basic actions handle well, but things like employing your radial inventory, building items from component parts and leaning out of cover can feel somewhat clunky.

While none of those things dramatically affect the gameplay, the loose shooting absolutely does. We get that it’s supposed to simulate your character’s unfamiliarity with firearms, but when you’re missing an unaware enemy from a couple of feet away, it’s absurd. Being a novice is one thing, being completely incompetent is another. Your aim seems much improved with the bolt gun and, to a lesser extent, the shotgun, but the revolver is your go-to weapon for a large chunk of the game.

Again, we understand this isn’t meant to be an action game (there’s even an achievement for completing it without killing any humans), and the poor aim is part of not so subtly nudging you toward stealth. Still, if you’re going to include it as an option, make it a little more viable.

When creating an Alien title, it’s important that the game feel like an organic extension of the world we’ve seen on film. On that front, Isolation is a smashing success. The Sevastopol space station features the same technology seen in the original film, creating that modern yet aged vibe. It really feels like you could be walking the hallways of the Nostromo. The lighting effects are excellent and play a major role in the game’s stealth elements. Couple that with being stalked by the alien and things get legitimately creepy numerous times throughout the game.

Character models are good as well, though the perspiration (or whatever the liquid is supposed to be) creates a very doll-like feel to facial close-ups during the cut scenes. We did encounter some strange animations, mostly when reloading past checkpoints, such as characters that appeared dead suddenly springing back to life, but things were smooth for the most part.

Minimalism is the name of the game on the audio side, as the game relies heavily on ambient sound to elevate the tension level. It works, too, as the sound of the alien scrambling through the ventilation system above you, the echoes of your footsteps and the eerie opening/closing of air ducts can really put your nerves on edge — we recommend playing with headphones if possible.

The voice acting is quite good, and fans of the original film will get treated to some cameos from the original crew via hidden audio logs. When the music does appear it makes for some exhilarating moments as it always accompanies a significant event.

Set 15 years after the events of the first film, Alien: Isolation follows Amanda Ripley, the daughter of Ellen Ripley (Sigourney Weaver). After nearly two decades of wondering and hoping, a salvage crew has located a data recording containing Ellen’s message, which sends you and two Weyland-Yutani workers jetting off to the Sevastopol to retrieve it. This being Alien, things do not go according to plan, and you arrive to find the remnants of a soon-to-be abandoned station under unknown duress.

Isolation wastes little time in throwing you into the deep end, separating you from your crew and making you traverse the massive station alone. It’s the pervasive sense of being utterly alone that makes the aptly named Isolation a success. You’re not a soldier. You’re not armed to the teeth. Avoidance is almost always your best play, and the game’s level design does a nice job of consistently offering you multiple pathways to accomplish this.

And then, there’s the alien itself. For those that played Resident Evil 3, you can think of the alien as the Nemesis on steroids. It’s a near-constant threat that doesn’t follow set patterns — just because you took path “A” and reached your goal one time doesn’t mean retracing your steps will work again. Between it and the dozens of malfunctioning, mannequin-like androids roaming the station, Isolation freaked us out more than any game we’ve played in years.

Unfortunately, Isolation’s greatest strength can also be its biggest weakness. The relentless nature of the alien — particularly during pre-determined “hunting” zones — makes for a lot of time spent hidden inside of lockers or underneath desks. It’s tense and dramatic the first few times, but once your death toll in a given area starts to mount that anxiety is replaced by frustration by watching five-plus minutes of progress erased in a heartbeat. This issue is assuaged markedly once you acquire the flamethrower, which can temporarily scare off the alien.

There are other issues as well. The story, while generally strong and feeling like an extension of the mythos, drags during the middle section. Plus, the game’s already considerable length is extended by the aforementioned alien-related deaths and too many “find an alternate route” mission objectives thrown in your path.

It’s impossible to extend that clenched teeth feeling over such a long period of time, which is why horror movies aren’t Lord of the Rings length, and a more streamlined story might’ve helped keep the intensity level elevated. It’s a definite case of less is more.

Although the campaign is clearly the main attraction, Alien: Isolation also features a survivor mode that drops you back into the ship with the goal of escaping the alien. There are also secondary objectives, and you’re awarded additional points based on their completion as well as your speed in escaping. It’s a decent enough way to revisit the Sevastopol, though mental fatigue with the constant cat-and-mouse mechanic may set in quickly.

Easily the best game built off the Alien film series, Isolation rewards patience and concealment and punishes impulsive actions. Even the most ardent fan is likely to encounter moments of frustration, but they’re only temporary and shouldn’t dissuade anyone from playing.