The Wire Troll: Maxime Lajoie May Get More Ice Time 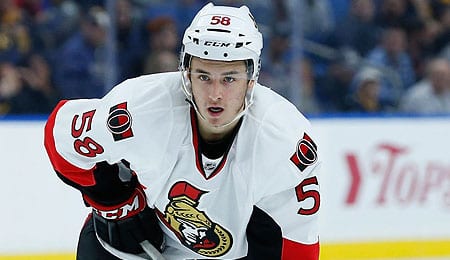 Ottawa could lean on rookie Maxime Lajoie more in the second half. (Kevin Hoffman-USA Today Sports)

Welcome back to another week of Fantasy hockey. We’re well over halfway through January now, with the trade deadline looming closer and closer. Keep your foot on the gas, peeps!

This week, Washington got starting goalie Braden Holtby back after he missed two games with an eye injury; two guys in need of a change of scenery swapped places with Victor Rask heading to Minnesota and Carolina getting Nino Niederreiter in return; and a pair of veteran blueliners were traded for each as Michael Del Zotto is headed to Anaheim while the Canucks received Luke Schenn and a 2020 seventh round pick.

Maxime Lajoie, D, Ottawa Senators (ESPN: 20.3 per cent; CBS: 32 per cent): In a fairly under the radar manner, Lajoie is putting together a fine rookie season (which started with a goal in his NHL debut as you can see in the video below). Even so, it’s been over a month since he recorded a point. Yet, with Mark Borowiecki now hurting, Lajoie should be in line for extra PT, making him an intriguing option over the next little while. A big part of Ottawa’s youth movement, Lajoie is a smooth skater and the fact he’s been a lineup mainstay this season has been a real pleasant surprise for the Senators considering last year he dipped on the prospect rankings a tad.

Sam Bennett, LW, Calgary Flames (ESPN: 1.8 per cent; CBS: 17 per cent): It’s been a couple of seasons since Bennett was last a Fantasy factor. He had a solid rookie effort and then regressed and stagnated. This season, however, Bennett is making a bit of progress — especially lately. After firing two power play goals and an assist on Friday, he now has three tallies and six points over the last seven games — as hot as we’ve ever seen the fourth overall pick from 2014. Calgary desperately needs secondary scoring, so if Bennett can supply some in the second half, he’ll continue to see PP time.

Devin Shore, LW, Anaheim Ducks (ESPN: 0.8 per cent; CBS: 4 per cent): Shore was dealt to Anaheim from Dallas this week for Andrew Cogliano, and has immediately seen a hike in ice time, with a chance for more responsibility now that Ondrej Kase has hit the IR. After a solid rookie effort in 2016-17, Shore struggled last season with the Stars, putting up an ugly -30. A fresh start may get him going, and he picked up an assist while going +1 on Thursday in his second game with the Ducks.

Joonas Korpisalo, G, Columbus Blue Jackets (ESPN: 5.7 per cent; CBS: 25 per cent): With usual starter Sergei Bobrovsky struggling lately, Korpisalo has had a chance to show what he can do, and it’s been impressive. Korpisalo was recently named as the new starter, and while it’s unclear how long this will last, you’d be wise to take advantage while you can. He’s already nearly matched his start total from all of last season, and while he hasn’t been spectacular overall, he’s definitely improved from last season and looked stellar in back-to-back games last Saturday and Tuesday.

Carl Soderberg, C, Colorado Avalanche (ESPN: 28.6 per cent; CBS: 20 per cent): Soderberg exploded on Monday, scoring three goals including a short-handed effort when he made Toronto defenceman Jake Gardiner look like a fool. Soderberg now has four goals and an assist over the last five games, and with 15 tallies on the season, is just one shy of matching his career high of 16, which he achieved twice.

Jordan Binnington, G, St. Louis Blues (ESPN: 12.7 per cent; CBS: 38 per cent): Binnington has been simply phenomenal since his last recall less than two weeks ago. He’ll get the start again on Saturday against Ottawa, not the easiest of matchups, but given how amazing this dude has been (undefeated in regulation), we wouldn’t hesitate to start him.

Patrick Maroon, LW, St. Louis Blues (ESPN: 29.9 per cent; CBS: 15 per cent): An injury to David Perron has caused some line juggling in St. Louis, allowing Maroon to move up to the top line with Vladimir Tarasenko and Ryan O’Reilly. Maroon scored the game-winning goal last Saturday, but other than seven minutes in penalties, he’s been quiet this week. Still, he’s getting more shots with the Blues and playing alongside this talented pair, is a nice sleeper for the time being.

Magnus Paajarvi, RW, Ottawa Senators (ESPN: unowned; CBS: unowned): Paajarvi hasn’t been a Fantasy factor since his nice rookie season, but with 10 shots and a goal over his last five games, plus a few games with extra PT (including over 18 minutes on Wednesday), the 10th overall pick from 2009 at least deserves to be watched.

Thatcher Demko, G, Vancouver Canucks (ESPN: 1.2 per cent; CBS: 19 per cent): Demko looked very sharp in his season debut on Friday, but it’s unclear how much action he’ll get going forward. As a dynasty option, he’s an excellent pick up.

Cal Clutterbuck, RW, New York Islanders (ESPN: 0.7 per cent; CBS: 2 per cent): A notorious diver, Clutterbuck has two goals and an assist over the last four games, going +2 with extra PT lately. And — as usual — he’s among the league leaders in hits.

In 1969, singer/pianist Edwin Joseph Bocage, better known as Eddie Bo, released the funk classic “If It’s Good to You (It’s Good For You), Part 2.” It was one of his last singles ever before he finally started releasing full-length albums.