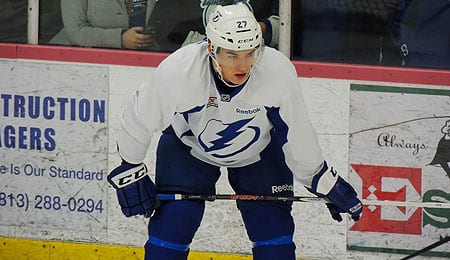 Jonathan Drouin may wind up at centre instead of the wing (Boltsbythebay.com).

The 2013-14 RotoRob NHL Draft Kit continues today with our first Top 10 list. Look for more cheat sheets and our sleeper picks coming soon. So while you wonder if Alex Pietrangelo can live up to his new seven-year deal, let’s review our top 10 rookies for the upcoming Fantasy hockey season.

1. Nathan MacKinnon, C, Colorado Avalanche: This was just too easy as McKinnon was the obvious choice. He is big enough to play in the NHL right now and thrive. New Colorado Coach Patrick Roy will likely start MacKinnon on the third line, but he should end up in the top six before too long. MacKinnon’s two-way game may need a little extra polish, but he is the most NHL-ready player from the 2013 NHL Entry Draft. If he winds up on the second or even first power play unit, expect a 50+ point season. Don’t look for 200 hits like Gabriel Landeskog put up, however, a few more points is not out of the question.

2. Jonathan Drouin, LW, Tampa Bay Lightning: Drouin has the most playmaking upside out of all the rookies (so no wonder the Lightning is giving him a look at centre this fall). There is no disputing that. He does have some muscular issues, as I like to call it, but teammate Martin St. Louis is kind of a similar player and everyone has seen his workout regimen. Tampa will try to get Drouin into offensive situations similar to the way it did with Cory Conacher. However, Drouin is a little better of a player. His hands, speed, and dexterity are already at the NHL level (see below for video evidence of that). There is a reason why MacKinnon and him were incredible in the playoffs (35 points in 17 games).

3. Valeri Nichushkin, LW/RW, Dallas Stars: Some think that Nichushkin is potentially like Alex Ovechkin and that may just be true. There are also some that say Nichuskin’s selfishness is a fatal flaw he may never fully grow out of. The skills are there, but the discipline is lacking at times and that’s why he fell all the way to Dallas at No. 10 in the draft, even though he could have easily gone in the top three. Dallas is going to play him like a top six forward and it really has to. Nichushkin does have to gain some muscle mass in the upper body first. It will be an interesting season for him in Big D.

4. Alex Barkov, C, Florida Panthers: Barkov is a bit of a plodder, a scout told us. but that was the only real knock he had on the Finnish prospect. Barkov’s hands, frame, and grit were something to behold. Everything else about his game is fast so a skating program is essential for him at least to develop a little more speed and acceleration. With some young talent in Florida like Jonathan Huberdeau, Barkov should be at home with a youthful nucleus and should have a solid season.

5. Filip Forsberg, RW/LW, Nashville Predators: Forsberg has just about every tool to be a high scoring winger in the NHL except for that strength that helps create spacing. Some reports suggest he has bulked up to a hair over 200 pounds, but we shall see. Nashville needs that scoring in the worst way as only one time have the Predators seen a player stay at or above a point per game for a whole season. Do not expect that this season either but at least a little improvement is possible. Forsberg will be an important cog there.

6. Seth Jones, D, Nashville Predators: Jones fell all the way to No. 4 in the draft where the Preds were only too happy to grab him, but his fluid skating and play made it obvious that this was a steal of a pick. Jones will have a great mentor in Shea Weber, which raises the possibility of a bigger than expected first season for the son of former NBA player Popeye Jones. Jones can play a very mean game as well which will endear him in the land of honky tonk.

7. Brandon Pirri, C, Chicago Blackhawks: Pirri had 75 points in 76 games for Rockford in the AHL last season. This has to be the time, right? It is almost a make or break situation for the 24-year-old who has had three excellent seasons in the minors. At some point, it either translates to sticking in the NHL or he’ll wind up as a career AHLer or overseas player. Pirri will get every chance to make it this time.

8. Bo Horvat, C/LW, Vancouver Canucks: There is just something about this guy that could surprise in Vancouver if he gets a shot. Horvat plays hard, but often saves his best for when it means the most. Watching him during the playoffs and Memorial Cup was amazing. Horvat’s draft stock went from bubble first round pick to ninth overall. Cory Schneider was traded for him so there are expectations. Horvat has a little Claude Lemieux in him at times and that could serve him well.

9. Danny Kristo, RW, New York Rangers: Kristo was a college standout with above average hands that just did not work out in Montreal as the Habs just did not see eye to eye with him in his development. However, if his play in the Traverse City Prospects Tournament was any indication, Montreal was wrong. Kristo will be a long shot to make the Rangers’ roster but he could be a real spark plug in Gotham.

10. Max Domi, C/LW, Phoenix Coyotes: Domi racked up 87 points in 64 games for London of the OHL last season, yet he plays a lot like dear old dad at times too. His low centre of gravity belies a grit most NHL players would be envious of. Domi’s defensive game and discipline do need work as he can be taken out of games. Phoenix was a perfect landing spot as he has energy line ability with top six potential.

We’re still in the early stages of the 2013-14 RotoRob NHL Draft Kit. You can follow me @ChrisWasselTHW on Twitter, and rest assured, there’s more Fantasy hockey goodness coming soon.