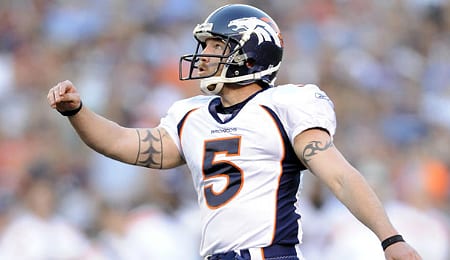 We are literally kicking off the 2014 RotoRob NFL Draft Kit with the highly anticipated, yet always controversial kicker rankings. Like we said last year, kickers are Fantasy football’s necessary evil. Some of you may be lucky enough to play in leagues that don’t use kickers but the majority of you will need this portion of the kit for the closing rounds of your draft.

So while you mull a potential landmark court decision that could compensate former NFL concussion victims, let’s review the top 15 kickers in Fantasy football.

1. Matt Prater, Denver Broncos (6): Prater had the highest field goal percentage (96.2) in the NFL last season. In fact, he only missed one FG attempt all season. Thanks to Denver’s record-setting offense, Prater also kicked 75 extra points, which was 23 more than anyone else. This mile high marvel should be the first kicker off the board. If you are still not convinced just watch Prater’s NFL record 64-yard laser beam in the video below.

2. Stephen Gostkowski, New England Patriots (4): Gostkowski was perfect from inside 40 yards and considering he kicks in the blustery New England winter that is certainly respectable. This team always score points and as long as Tom Brady is there, Gostkowski’s value is top notch. Gostkowski also finished tied for the lead in field goals made (38) last year.

3. Phil Dawson, San Francisco 49ers (1): We were high on Dawson last year since he had finally escaped Cleveland. He let us down slightly, but we still believe in the 49ers’ overall product. Therefore, we rank Dawson here with baited breath and a big smile. The 39-year-old instilled enough confidence in San Francisco that it re-signed him. When in doubt, a veteran kicker on legitimate Super Bowl contender is always a good choice.

4. Steven Hauschka, Seattle Seahawks (13): The Seahawk boot had the second best FG percentage in the league in 2013. As you can imagine, we like Seattle’s chances to be successful this year. As for Hauschka, who missed only two kicks all last season, he has clearly found himself a home in the Pacific Northwest. Seattle gave him 3.35 million reasons guaranteed to stay (as part of a three-year, $9.15-million deal) and that’s some serious job security for a kicker.

5. Greg Zuerlein, St. Louis Rams (11): So maybe eight games in a dome is overrated, but come on it’s okay to buy into the same old song and dance. To entice you further, Zuerlein only missed just two kicks last season. Doubtlessly, the Rams are in tough division, so you can bet Zuerlein will be called upon plenty as they will not want yo waste any scoring opportunities.

6. Adam Vinatieri, Indianapolis Colts (NR): Mr. Clutch missed five kicks last year, but he also attempted 40, the most he has ever tried in a season.

7. Nick Novak, San Diego Chargers: Novak was perfect from everywhere, but between 30-39 yards. With the Chargers on the upswing, we like his chances at redemption.

8. Justin Tucker, Baltimore Ravens (7): Who could forget Tucker’s 61-yard game-winning blast against the Lions on Monday Night Football? Let us also not forget how much the Ravens struggled on offense — especially in the red zone. Tucker could be a valuable cog for you and the Ravens attack.

9. Robbie Gould, Chicago Bears (15): Here is an established veteran on a potential playoff team. What’s not to like? Okay, so Gould actually missed two kicks indoors in Minnesota last season, but the Bears offense will definitely score points this year.

10. Mason Crosby, Green Bay Packers (NR): There have been a few moments in the last couple seasons that Crosby appeared to done as a NFL kicker. But, those darn loyal Packers let him find himself again. Crosby missed just four kicks last season and all of those were from beyond 40 yards, including two from beyond 50.

11. Blair Walsh, Minnesota Vikings (3): As the season progresses and bitter cold rolls in we will see how good Walsh is. He missed two kicks on the road last season, one in London and one in East Rutherford. However, Walsh did connect from 39 and 40 yards in snowy Baltimore.

13. Matt Bryant, Atlanta Falcons (2): The Falcons will be better this year and Bryant should be a solid play against most teams.

14. Sebastian Janikowski, Oakland Raiders (10): Janikowski booms from 50 plus and Oakland has a chance at a .500 record. He will be a big part of that success.

15. Shayne Graham, New Orleans Saints (NR): We would have loved to rank Graham higher because being a Saint means opportunity will keep on giving. We are just not sure of his job security.

Now it’s your turn. Let us know in the comments below which kicker you’re hoping to land on your Fantasy football team this season.