The Wire Troll: Silver and Black and Brown Edition? 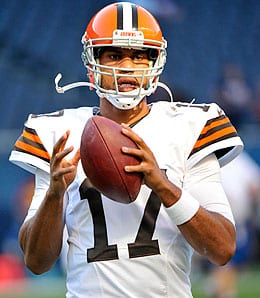 Jason Campbell is a fine replacement QB when healthy. (Sbnation.com)

By Josh Johnson and Michael Osinski

Each and every week of the NFL season some random players emerge from depth charts and make an impact. When this happens, fodder is produced for Fantasy owners to debate over. As such, we present to you The Wire Troll for Week 14.

Matt McGloin, Oakland Raiders: The only people looking for QBs this time of year are trying to scoop up a lucky break for an injury replacement. Right now, those folks are the Jay Cutler and Aaron Rodgers owners who weren’t quick enough on the draw to pick up Carson Palmer or Josh McCown. That brings me to McGloin. The kid walked on at Penn State and started, yet he went undrafted. He came into camp, beat out Tyler Wilson and then played well enough for the Raiders to send Matt Flynn to his temporary exile in Buffalo. The truth is, McGloin hasn’t been half bad since he took the reins when Terrelle Pryor got hurt, so maybe it’s time that the “experts” learned his name (see the video below to see what we mean). He’s thrown for over 700 yards, four scores and only two picks in three games. McGloin just seems to go in, stay calm and get the job done. It’s always a risky proposition to go with a rookie, but he is a better play than David Garrard, Alex Tanney or Kellen Clemens. In Week 14, the Raiders play the Jets who can be beat over the top and McGloin has a couple weapons available to exploit that. — M.O.

Jason Campbell, Cleveland Browns: A couple of caveats here. Campbell has not yet been cleared to play as he is still suffering from concussion symptoms. Alex Tanney may play in his stead, but if Campbell does get clearance and you need a QB replacement, he has already proven this season to be a good one. Campbell torched the Kansas City defense for nearly 300 yards and two scores back when it was good. He followed it with a three-TD game against Baltimore, another team pretty good against the pass. Campbell also has chemistry with the hottest WR in the game (Josh Gordon). The Browns play New England in Week 14 and the Patriots secondary is making just about everybody look good these days. (See Case Keenum in Week 13.) — M.O.

Chris Ogbonnaya, Cleveland Browns: The running theme here is that the Patriot defense has a few holes in it. Two weeks ago, Knowshon Moreno ran for 224. In Week 13, Ben Tate and the Texans ground game had four TDs. And this weekend, the Browns visit Foxboro. Ogbonnaya has had a couple nice games for a predominantly pass-first offense and really isn’t losing much time to the carcass that used to be Willis McGahee. Fozzy Bear… err… Whitaker only got a handful of carries. With no Vince Wilfork or Jerod Mayo to clog the middle, Ogbonnaya (a between the tackles back) should have a nice double-digit game. — M.O.

Jonathan Dwyer/Felix Jones, Pittsburgh Steelers: With Le’Veon Bell sustaining a concussion, both Jones and Dwyer will see many looks. Jones is the likely starter if Bell doesn’t pass league protocol. Jones has had some quality years while with Cowboys, however, injuries have softened his burst. He is also a better pass catcher than Dwyer. Dwyer rolled up over 700 yards of offense last season for the Steelers. He was initially cut this season, but injuries to Bell and LaRod Stephens-Howling forced Pittsburgh to give him another chance. — J.J.

Ted Ginn Jr., Carolina Panthers: Unless your league rewards for return yards, Ginn should be available. He is the number three WR for Carolina and his furious speed in the slot makes him a game changing option. Ginn only has 29 receptions on 51 targets so he doesn’t have the best hands, but he does have 469 yards and four TDs. He also leads the team with 16.2 yards per catch. — J.J.

LaVon Brazill, Indianapolis Colts: Another third WR, Brazill ran a 4.48 40-yard dash at the 2012 Combine. He has drawn some comparisons to Victor Cruz, but was blocked from showcasing his skills last season by the veteran Reggie Wayne and the emergence of T.Y. Hilton. This season, the presence of Darrius Heyward-Bey kept Brazill buried on the depth chart until Wayne’s season-ending injury. When the Colts elevated Da’Rick Rogers from the practice squad shortly after that, Brazill again seemed lost in the shuffle. However, Rogers has not seen the light of day, while Brazill has just eight receptions for 97 yards. Still, six of those receptions have come in the last two games and with Heyward-Bey possessing (as Howard Bender put it on our October 30 Podcast) “hands of stone,” Brazill should literally receive options going forward. –J.J.

Andre Holmes, Oakland Raiders: There is something to be said about timing between a QB and a WR. It comes with reps in practice. This is the reason a lot of backup QBs struggle when suddenly put into a game. But when a backup or practice squad QB has the opportunity to throw to someone with whom he practiced, look out! (Think Alshon Jeffery–Josh McCown or Scott Tolzien–Jarrett Boykin). McGloin (mentioned above) had been throwing more to Rod Streater than Denarius Moore in the first couple games he started. Moore had been on the first team (Streater started the season on the second). Then, Moore got hurt and Holmes was promoted to the first team. Sure, it was against the Cowboys, but Holmes snagged seven catches for 136 yards. It has a lot to do with the chemistry they developed practicing with the second team. In Week 14, he draws the Jets secondary, which, as we mentioned, can be beat over the top. If you need a WR3 for Week 14, Holmes makes for a good play. — M.O.

Dennis Pitta, Baltimore Ravens: If you are still skittish about Jordan Reed and Julius Thomas or had already replaced them with Anthony Fasano or Delanie Walker, now may be the time to go get Pitta. Indications are he’ll play this weekend and the match-up against Minnesota is fantastic. And, while it is often wise to let a player who has come back from IR show you something before you play him, because you are already in the playoffs or are just a week away, you no longer have the luxury of waiting. Let someone else in your league looking for TE help waste their claim on Zac Ertz as Week 13’s two-TD game was a fluke driven by Nick Foles exploiting a weakness in Arizona’s defense. Ertz may not have another two-TD game in his life let alone for you in this season’s playoffs. Joe Flacco loves Pitta and the Ravens are fighting for their playoff lives. If Pitta plays, be assured he will get fed. — M.O.

Oakland Raiders: Given our recommendations this week, it’s safe to say we like the Raiders over the Jets in Week 14. Those of you that stream defenses each week get the value of matching up with a rookie QB. As good as Mike Glennon has been all year, the Carolina defense scored 16 in Week 13. We’renot entirely sure who is playing QB for the Jets this weekend. Geno “Picks” Smith was benched. Matt Simms reminded us more of his brother Chris Simms than of his father, Phil. And really, wasn’t the last game David Garrard played back in the 1990s? The truth is, it won’t matter. The skill-position players have no skills and as much as we like Chris Ivory, they are not going to use him in a wildcat. Picks, sacks and few points. That’s what you want in a defense and the Jets offense is quite adept at doing that. — MO