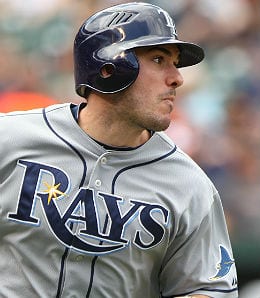 Matt Joyce put on quite a show this weekend.

Each week, we will examine five players with rising Fantasy stock and five players headed in a downward trend.

Matt Joyce, LF, Tampa Bay Rays: Joyce will miss seeing the Orioles. Over the weekend in Baltimore, he raised his batting average 17 points, going 7-for-12 (.583) with two homers and six RBI, including a club record-tying five-hit day Sunday. For good measure, on Monday he added a third dinger in two days in a game still going as we go to press (see video below). Owned in only 11 per cent of ESPN leagues and 23 per cent of CBS leagues, Joyce could be heating up. He is batting .326 since June 13, and his season OPS of 784 is more than respectable for someone owned by less than a quarter of the Fantasy universe.

Mike Zunino, C, Seattle Mariners: Zunino’s ESPN ownership has spiked 5.4 percentage points up to 7.4 per cent, but he has a long way to go to catch his 45 per cent mark in CBS leagues. They are more in tune with his four-homer, five-RBI surge since June 20. Zunino won’t get you average, but he’s got 11 dingers on the season. Wake up, ESPN Fantasy world!

T.J. House, SP, Cleveland Indians: He’s baaaack! His 1.1 per cent combined ownership among ESPN and CBS leagues is partly a result of his recent demotion and subsequent promotion from Triple-A Columbus. House went six innings on Sunday and allowed just two earned runs in a hard-luck loss. It was the fourth time in five starts he allowed two earned runs or fewer and he has walked just one batter in his last 11 1/3 IP.

Alex Avila, C, Detroit Tigers: Avila takes a beating behind the plate, but apparently Fantasy owners are just plain neglecting him altogether. Owned in only one per cent of ESPN leagues and 14 per cent of CBS leagues, he is batting .286 in June and on Sunday socked his first homer of the month, one in which he has a .371 OBP. Avila is not going to light up the stat sheet for you, but he has five homers, 18 RBI, and a 731 OPS for the season.

Cameron Maybin, CF, San Diego Padres: Maybin bears a slight resemblance to a young Flavor Flav, and until recently had hit like Flavor Flav (and no, we don’t mean the way Flav supposedly hit his wife). But let’s cut Maybin some slack because, despite his minuscule 0.1 per cent ESPN ownership and 6 per cent CBS ownership, he has shown glimpses of life lately. The 27-year-old is 7-for-24 (.292) with three RBI since June 19 and has posted a 728 OPS in June.

John Lackey, SP, Boston Red Sox: Universally owned in the ESPN world and by 95 per cent of CBS nation, Lackey has been rather shaky in his last two outings despite a win Sunday in the Bronx. Since a nearly-unhittable performance against the Twins on June 18, he has been hit hard while failing to go deep into games. Lackey has an 11.42 ERA in those two starts, allowing three walks and three home runs while managing just five strikeouts. That’s an alarming trend for a guy who had gone eight innings-plus in three of his previous four starts.

Ryan Howard, 1B, Philadelphia Phillies: Howard’s popularity in Philadelphia has plummeted, though his Fantasy ownership has yet to wane (97.4 per cent ESPN, 85 CBS). Perhaps it should, because after the onset of his homecoming to St. Louis, his power has all but disappeared. Since homering June 19 against the Cardinals, Howard has gone 11 straight games without a big fly, tallying just one RBI in that span. He had seven longballs in his previous 23 games. For the year, Howard is hitting just .238.

Shelby Miller, SP, St. Louis Cardinals: Miller had back issues in his previous two starts, and on Sunday, the Dodgers made him feel downright miserable. The young righty is scuffling of late, which may explain his 5.6 percentage point drop to 93.8 per cent in ESPN leagues (he’s at 90 per cent in CBS leagues). Miller shut out the Blue Jays on June 7, but has struggled with his control since, issuing 15 walks in four starts. His last three outings have been rough: 0-2, 8.16 ERA, 11 walks, 10 strikeouts. Miller has won just one of his past six decisions.

Now it’s your turn. Let us know in the comments below which players you’re tracking that are rising or falling recently.

Crave more in-depth Fantasy analysis? Then join us every Thursday at 9 p.m. EST for RotoRob Fantasy Baseball Weekly Podcast on Blogtalkradio as we entertain and edify you for an hour or more each week. This week, RotoRob will be joined by RotoRob.com MLB/NFL Writer Michael Seff. Tune in here.