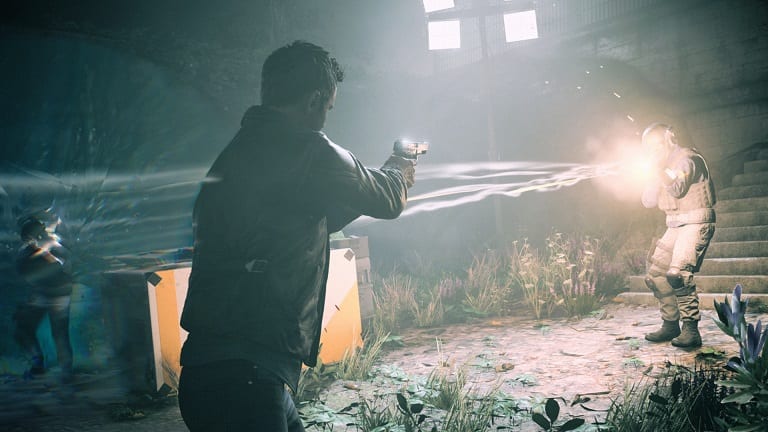 Kevlar is no match for the ability to stop time.

Although there would appear to be a natural synergy between gaming and television/film, the execution has left much to be desired. So when we say that Quantum Break might be the best example of blending live action with gameplay it may not carry much weight. If you value things like character development and story building, however, it should.

Broken down to its DNA, Quantum Break is a third-person, cover-based shooter — albeit more like the recent Tomb Raider games than say, Gears of War. As in Tomb Raider, you enter cover automatically, assuming you’re by an object the game thinks you can hide behind. It can be a bit jittery, and it creates some awkward transitions, but the addition of time manipulation renders that largely moot.

On the shooting side, Jack carries three weapons at a time: a pistol with infinite ammo, a heavy weapon (shotgun, LMG, etc.) and an automatic rifle. Aiming is reasonably precise, though the game encourages you to deal with enemies at close-to-mid range with no legitimately scoped options. It’s worth noting that you can’t shoot from the hip, even with the shotgun. You must aim to fire your weapon.

There is a final ability in your toolkit: time vision. Activating it bathes any object you can interact with in a colour-coded light. Red is for threats, blue for ammo and orange for explosives and points of interest. Like many other recent shooters, it stays active until you move and then fades back to reality.

It’s a satisfying suite of options, and they’ve been smartly laid out on the controller. Once you get used to your powers, combining them with your guns to take out enemies becomes a lot of fun. Especially since Quantum Break takes a less is more approach that staggers encounters enough that combat never becomes a slog.

In the same vein of Mass Effect, Quantum Break does a great job of creating an authentic, lived-in world despite not being the most technically advanced game on the market. There isn’t huge variety in the locations, but there’s enough that it never feels repetitive. Although odd animations and some wonky physics do occasionally appear, it’s not enough to damage the immersion.

What eventually wears thin are some of the time effects themselves. As time breaks down you’ll encounter more and more “stutters” in which the world stops cold. These end up slathering the game in a weird, bluish filter that creates an almost pastel look to objects and faces.

With a fully acted show as part of Quantum Break, voice acting is very strong. There are plenty of actors you’ll know — Shawn Ashmore, Aidan Gillen, Lance Reddick and Dominic Monaghan to name a few — and most are given ample opportunity to develop their personality. Music and sound effects are solid, and the overall production values are high.

Invited to view an experiment by his friend Paul Serene (Gillen), Jack (Ashmore) arrives at Riverport University to find that Serene has learned how to travel through time. Jack’s brother and partner of Serene, Will (Monaghan), shows up to try and stop the experiment but is too late. The result is a potentially catastrophic rupture in time itself, which Jack will have to fix.

Working against you is Serene, who has been to the end of time and has his own ideas for how best to prepare for it. To succeed you’ll need to fight through the Serene-founded Monarch Solutions and its troops. You’ll take on several types as you go, some of whom carry equipment that allows them to ignore the effect of stutters and others that create a dead zone where your powers don’t work.

As noted, combat is only part of Quantum Break, and the game is content to fill large sections with world building and exposition. Like many games, there are lots of collectibles to find, but we don’t know if we’ve ever seen one in which these materials (email chains, press stories, etc.) were created with such care. They add considerable depth to the fiction and are worth taking the time to read.

Other hidden items include time ripples — events that slightly alter the narrative, specifically during the live action show — and “chronon” sources that can be used to upgrade your powers. The upgrade aspect is actually a little weak with limited tiers and incremental improvements.

Action is split into five acts with three parts each. At the conclusion of the first four you’ll switch from controlling Jack to Serene when you’ll choose between two options to branch the story. Using Serene’s ability to see the future you’re given a read on where each course will take you and decide from there. It mixes some aspects up quite a bit and even provides context for your decisions.

In between each of the acts are 20-plus-minute live-action episodes that fill in some of the blanks and also develop other characters that don’t feature heavily in the gaming portions. These do change based on your choices as Serene, but by shooting some moments ambivalently (and without dialogue) they’re able to reuse footage by having off-screen elements (such as a news cast) be the difference.

Production quality is in the neighborhood of a good web series with some elements making the transition from graphics to real life more seamlessly than others. No doubt some will balk at taking such a long break in the middle of gaming, and Remedy seemed to know it as very little of what’s contained in the episodes would be all that detrimental if you missed it. We’d recommend watching it, though, as it’s fairly well done and adds more layers to the story.

An enjoyable blend of storytelling, shooting and unique time-bending abilities, Quantum Break is worth getting, and hopefully it’s just the first entrant in a new first-party IP for Xbox One owners.