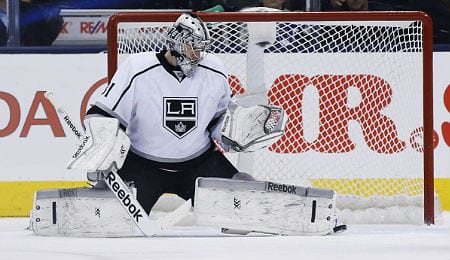 Martin Jones has been spectacular in a part-time role. (Mark Blinch/The Canadian Press)

Word of warning: this is a goalie-heavy issue, so strap on the pads and keep your glove up. On to the week’s picks.

Martin Jones, G, Los Angeles Kings (ESPN: 5.3 per cent; CBS: 26 per cent): For a goaltender that doesn’t see a lot of time, Jones has been pretty spectacular this season. The Kings’ crown prince is coming off back-to-back 4-0 shutouts, including a 26-save performance against Arizona on Thursday. So far this season, Jones has three wins, a 1.42 goals against average, a .947 save percentage and two shutouts in seven games played. We guess there’s a reason he was slotted 230rd in our Dynasty Rankings. Of course, Jones was wowing us when he was just 10 years old, as you see in the video below.

Antti Raanta, G, Chicago Blackhawks (ESPN: 29.2 per cent; CBS: 45 per cent): With starter Corey Crawford out for a few weeks, the Chicago net will be split between Raanta and rookie Scott Darling. In two games in the past week, award-winning Finn Raanta collected two wins, a 2.00 goals against average and a .951 save percentage. In five games, he has three wins, a 2.02 goals against average, a .942 save percentage and a shutout. It’s not a great sample size for Chicago’s new starter, but he’ll get plenty of opportunities to expand upon it the next few weeks.

Shawn Matthias, C, Vancouver Canucks (ESPN: 0.9 per cent; CBS: 2 per cent): A second round pick of the Red Wings in 2006, Matthias isn’t going to put up a lot of points, but had a very intriguing week with two goals, four points, a plus-3 rating, two penalty minutes, 15 shots on goal, three face-offs won and two blocked shots. In 27 games this season, the big (6’4″) pivot has six goals, 11 points, a minus-5 rating and 51 shots on goal.

Brett Connolly, RW, Tampa Bay Lightning (ESPN: 0.8 per cent; CBS: 10 per cent): The former sixth overall pick hasn’t been all that impressive in his young NHL career so far, but had a good Week Eight with three goals, a plus-1 rating, five penalty minutes, two power play points, a game-winning goal, eight shots on goal, a face-off won and three hits. In 16 games this season, Connolly has five goals, a plus-2 rating and 27 shots on goal. Tread carefully as he’s not going to be a long-term answer to your Fantasy woes.

No. 1. Pavel Datsyuk, C/LW, Detroit Red Wings: After being injured for much of the first quarter of the season, the man with the magic hands is putting them to good use. In Week Eight, Datsyuk piled up four goals, six points, a plus-6 rating, three power play points, a game-winning goal, 14 shots on goal, 35 face-offs won and three hits. He certainly came in handy for us, but we digress…

No. 2. Eddie Lack, G, Vancouver Canucks: Lack had a perfect week, stopping all 34 shots faced to collect the shutout win. Teammate Ryan Miller wishes that could be said of him, but we’ll get to that in just a bit.

No. 3. Marc-Andre Fleury, G, Pittsburgh Penguins: Fleury had a great week himself. In two starts, the former first overall pick managed two wins, a 1.00 goals against average, a .966 save percentage and a shutout. For a goaltender that always seems to hit a brick wall in the playoffs, he’s hard to beat in the regular season.

No. 1. Ryan Miller, G, Vancouver Canucks: While Lack may have had a great week, the same can’t be said for Miller. In three appearances, the former Olympian collected just one win, a 4.60 goals against average and a .838 save percentage.

No. 2. Semyon Varlamov, G, Colorado Avalanche: Varlamov’s 5.24 goals against average and .836 save percentage may be worse than Miller’s numbers, but at least he only allowed nine goals instead of 11. Either way, it’s atrocious.

No. 3. Tuukka Rask, G, Boston Bruins: Beantown’s No. 1 netminder wasn’t much better this week, posting a win, a 4.03 goals against average and a .878 save percentage in three appearances.

And that wraps up our coverage of Fantasy hockey’s Week Eight. How did you do? Do you find any sleepers we forgot to mention? Tell us in the comments below.