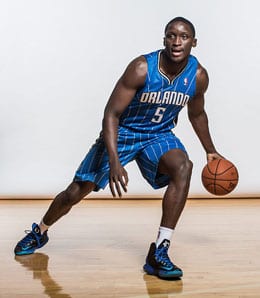 Victor Oladipo is our pick for NBA ROY. (Simplybasketball.tumblr.com )

The 2013-14 RotoRob NBA Draft Kit rolls on today with another of our beloved Top 10 lists. So while you wonder whether Marcin Gortat can bounce back now that he’s landed in Washington, let’s check out our favourite Fantasy basketball rookies.

1. Victor Oladipo, SG, Orlando Magic: The No. 2 overall pick is considered highly coachable, which must be music to the Magic’s ears as it tries to rebuild around this youngster. He’s going to post very strong FG percentages for a two-guard (check out the video below to get a sense of his finishing ability) and is going to rack up plenty of steals. Given that there’s talk Oladipo could steal PG Jameer Nelson’s job, he’s even more intriguing as a prospect.

2. Ben McLemore, SG, Sacramento Kings: McLemore slipped all the way to seventh in this year’s draft, but before all is said and done, he may turn out to be one of the highlights of the 2013 class. He struggled with his shot a bit during Summer League play, and will likely come off the bench behind Marcus Thornton for now, but the one-dimensional Thornton will only hold off this talented rookie for so long. We love McLemore’s size (6’5″, 195) at the off guard position.

3. Otto Porter, SF, Washington Wizards: The former Georgetown star has been dealing with a hip injury this fall. Porter could be ready for Opening Day, but expecting a slow start is wise given that he missed training camp. Lauded for his smarts, this kid will figure out a way to ramp up his game.

4. Anthony Bennett, PF, Cleveland Cavaliers: A key component of Cleveland’s rebuilding program, 2013 No. 1 overall pick Bennett is a bit undersized at the four, but could create serious mismatches as a small forward. The Cavs suddenly have major frontcourt depth, so there’s no reason to rush the young Canadian – especially given how raw he is – but his skills will ultimately emerge.

5. Michael Carter-Williams, PG, Philadelphia 76ers: Carter-Williams may not have the long-term upside of some players on this list, but we’re bullish on his chances this season as he’s among the most NBA-ready of this class. The former Syracuse point guard is a highly competitive player and the Sixers thought enough of him to deal Jrue Holiday away this summer.

6. Trey Burke, PG, Utah Jazz: Burke would likely be a top three rookie this season – he has a clear path to PT – but a finger injury will cost him the first couple months of the season. He struggled during Summer League play and his injury prompted the Jazz to sign veteran Jamaal Tinsley, meaning Burke will have more competition for minutes when he returns.

7. C.J. McCollum, PG/SG, Portland Trail Blazers: McCollum was considered a serious ROY candidate, but we’re not quite as high on him after he broke his foot. Still, in time he may prove to be a steal considering the Blazers got him with the 10th pick, but we’ll have to wait a while this season before he becomes a Fantasy factor.

8. Kentavious Caldwell-Pope, SG, Detroit Pistons: Caldwell-Pope has very nice long-term potential, but for now, he’s going to have to compete for minutes with Rodney Stuckey and Chauncey Billups. KCP is a very talented youngster out of the University of Georgia, but because of his uncertain path to PT, it’s hard to envision grabbing him as more than a flier.

9. Cody Zeller, PF/C, Charlotte Bobcats: Zeller isn’t known for his defense, and when the defensively-challenged Bobcats picked him, it raised a few eyebrows – especially considering some of the players that were left on the board when Charlotte picked fourth. It sounds like Zeller will come off the bench behind Josh McRoberts at the season’s outset, but as he gets more comfortable with the NBA, that could change.

10. Kelly Olynyk, PF/C, Boston Celtics: Part of a sudden wave of great young hoops talent coming from Canada, Olynyk was drafted out of Gonzaga after the Celtics traded up to grab him. While he played centre in college, he’s expected to be a power forward with Boston.

Now it’s your turn. Let us know in the comments below which NBA rookie are you most intrigued by this season.