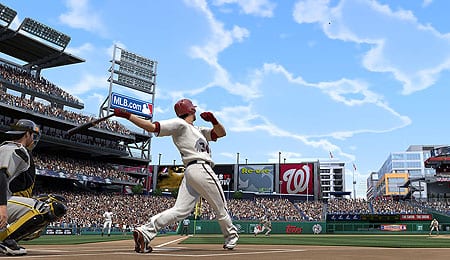 Looking over the current landscape of sports games it has become a virtual monopoly across the board — this despite the fact that only Madden has true exclusivity. NBA 2k buried Live, EA’s NHL put NHL 2k on ice, FIFA dominates Pro Evolution Soccer (even though the latter is a damn good game) and Sony’s The Show has outshined MLB 2k for years. With MLB ’13: The Show, Sony San Diego once shows why it is the standard bearer by producing arguably its finest effort to date.

At this stage if you can think up a way to play virtual baseball, The Show probably has you covered with multiple options for each of the four core activities (batting, pitching, fielding and base running). The setups are as tight and responsive as ever, and in fact even feel a bit more forgiving this year as I finally seem to be hitting home runs and stealing bases at a realistic clip. There’s no need to delve too deeply here… suffice to say there’s a way to play that suits your style.

Visually, The Show has been brilliant for years now, and MLB ’13 is no exception. Character models carry incredible detail and major leaguers almost invariably look like their real-life counterparts. In action, players move with lifelike fluidity, and even after years of sinking significant time into the series, things manage to stay fresh thanks to its tremendous variety. Ballparks are exquisitely detailed and the new Post-Season Mode does a great job of simulating the playoff atmosphere.

As usual, the audio side doesn’t fare as well. Sony tried to mix up the formula by adding Steve Lyons to the broadcast booth, but there’s no continuity to his addition and rarely do you feel like all the in-game commentators are actually in the same place calling the action. Chatter on the field is decent enough and crowd reactions are good. Let’s just hope the launch of the PlayStation 4 inspires the team to up the commentary as it’s really the only thing holding MLB ’13 back.

If you’re expecting Sony San Diego to trot out some game changers this year I’m afraid you’re going to be disappointed. MLB ’13 continues the series’ tradition of fine tuning an already excellent re-creation of America’s past time. In fact, one of the biggest additions is aimed squarely at newcomers. Dubbed “Beginner Mode,” the game utilizes dynamic, adaptive A.I. to tailor The Show to your skill level — in other words, as you get better so does the competition. Veterans won’t care, but it should offer some value to casual or first-time players.

As noted, the playoffs have been given their own mode as well with different presentation, jacked up crowds and situation-specific commentary. Even though it plays just like any other mode it’s still a fun addition for those that don’t care to play through a 162-game season.

Beyond those two items most of what you’re getting is refinement, and nowhere is it more obvious or welcome than in Road to the Show (RttS). A year ago they made the journey to the majors a smoother one. This year they made it more enjoyable. The new fielding camera ups the immersion and makes that aspect of being a position player something you’ll want to do. Base running has also been improved as widening/shortening leads and advancing/retreating is incredibly simple. Hitting and pitching were already rock solid, and nothing has changed on that front.

Presentation still feels like a work in progress as most of the time you play with only ambient sounds of the ballpark and on-field chatter. And then occasionally when you do something noteworthy the crew will chime in during a replay like they’ve been there the whole time. They’ll also do inning recaps if you were involved in the third out or on base when it happened. It’s an odd mix.

Franchise has also gotten some love, primarily in the form of improved scouting and training. Scouts are assigned to a region and discover/evaluate talent based on their ratings. The game now identifies the top players available entering the draft, which helps spare you the trouble of scouting talent that’ll be long gone by the time your pick rolls around. Training is also simpler, allowing you to specify areas for individual players to work on. It’s definitely for those that really want to take a hands-on approach to the mode — if you’d rather they spent their time elsewhere you can automate these tasks.

One other tweak of note in franchise is that smaller market teams can now garner an increased budget as a reward for sustained success. It’s an interesting concept, even if that’s not necessarily how teams operate in the real world — some small market clubs (like the Brewers) push payroll up when they see a chance to compete for postseason success while others keep a firm eye on the bottom line no matter how many games they win or movies with Brad Pitt that they’re featured in. Despite some relatively small changes I found that my enjoyment of both primary modes received a notable uptick.

Taking a page from 2k’s playbook, MLB ’13 has added The Show Live, which allows gamers to play the current schedule with accurate real-world stats to re-create the matchups. Since the season hasn’t started yet the feature is unable to be tested. From a conceptual standpoint, even if it’s not an original idea it still has potential — especially for fans of clubs that outperform expectations.

Even with everything The Show does right, there remains room for improvement. Animation glitches still pop up, including an incredibly frustrating one where the pitch freezes just after release and then reappears as it’s crossing home plate — seriously, it’s like something out of the old Baseball Simulator. Online play, while seemingly improved, has been an issue for years and a handful of solid connections isn’t enough to pronounce it airtight. There are also some really bizarre player ratings this year. It’s not worth going into this in depth, but serious fans are sure to raise some eyebrows.

This is the fourth straight year we’ve bestowed the same overall rating on The Show. That being said, MLB ’13 makes improvements in key areas and is my favoorite one, yet — even if it’s not quite enough to bump it up. Baseball fans shouldn’t hesitate to pick it up.

A year ago it felt as though The Show was a bit rushed to its portable platform. That isn’t the case this year, however, as Sony has loaded the Vita version to the gills with only a pair of online modes (Diamond Dynasty and league play) being absent. The improvements seen on the PS3 are present here as well, and the cross-platform integration via the cloud is seamless. I switched back and forth in both franchise and RttS multiple times since the servers went up on launch day and never had so much as a hiccup with the process.

However, while the handheld version of The Show may play like its big brother, it sacrifices a lot of the visual dazzle to make it happen. In fact, of all the PS3/Vita cross-play titles I’ve checked out this one has the most graphical degradation I can remember. It goes beyond missing transitions and fewer lines of commentary, too. For example, when fielding in RttS I couldn’t read the name on the back of my jersey, not to mention that before each pitch all the players in the dugout vanished.

In regard to the actual games, yes, it’s going to be tougher to nibble at the corners or slug home runs on a five-inch screen. And yes, some of the gameplay options are nearly unusable (I’m looking at you pulse pitching). Ultimately, though, all these nitpicks seem a small price to pay to enjoy the best game of portable baseball available.

Given some of the less than stellar console-to-handheld transitions we’ve seen from sports titles, it can’t be overstated how much MLB ’13 The Show on Vita plays like the PS3 version. If you own both systems it’s worth owning both versions.

For those that prefer to run isolation or penetrate and kick, EA has you covered there as well with multiple offensive sets that can be called by holding down the left bumper. You’re supplied with turbo (right trigger) and a collection of spin moves and crossovers mapped to the right stick to help you break down your defender. However, as well as perimeter play is handled, post offense feels pretty lean and affords only a handful of moves at your disposal.