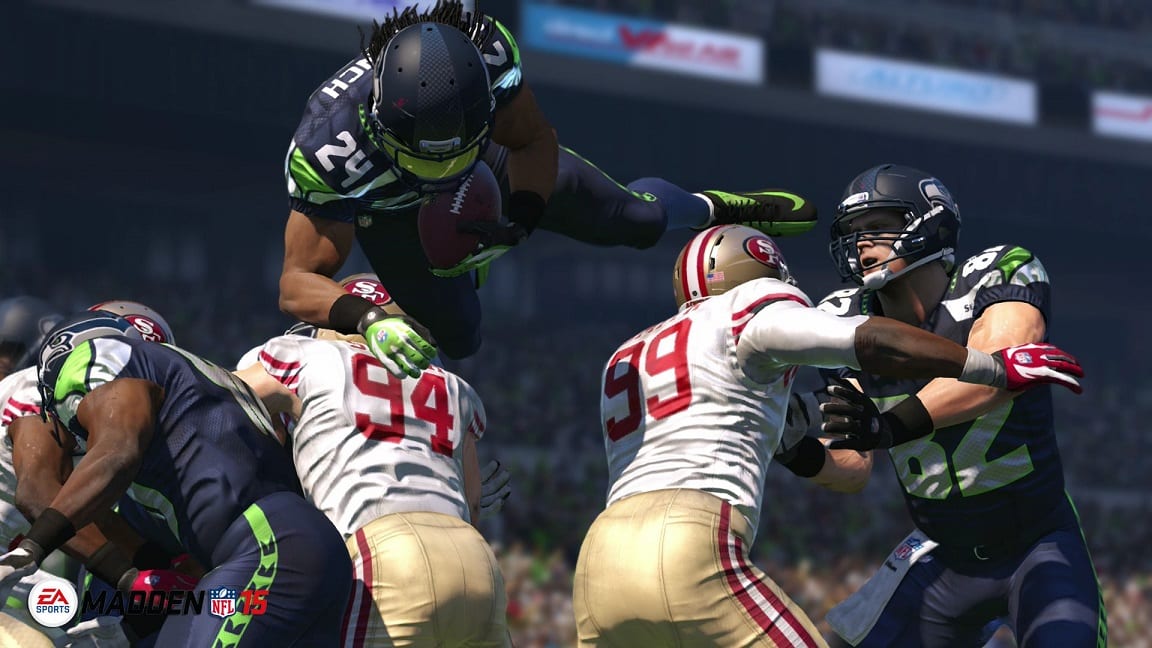 I’ll try not to go over the top with my puns, but if I do, don’t Lynch me.

While last year represented a significant milestone for the Madden franchise, you could argue that Madden NFL 15 is a more important release since it marks the full-fledged jump to PlayStation 4 and Xbox One. After sinking some serious hours into the PS4 version, we have to say that it seems like EA Sports felt the same way as notable improvements have been made over last year.

Defence is the name of the game in Madden 15 as most of the game’s overhauls have come on that side of the ball. The most exciting alternation addresses defensive line play, introducing timed button prompts that turn the battle in the trenches into something much more interactive and enjoyable. There’s also a new tackling cone that shows when you’re in range to take down a ball carrier. Both new features can be turned off if you’re a traditionalist, though we’d suggest at least giving them a shot before shooting them down.

An important new item has been added to pre-snap as well. It allows you to freely change the in-game camera to one of your choosing on the fly. It’s incredibly responsive, and assigning it to the d-pad is a great idea as it’s so easy to try out different viewpoints until finding the one you like. Look for other sports games to implement that functionality.

Quarterbacking and offensive play in general is largely the same, though they’ve expanded the concept of reading keys that was introduced with the option. There’s a fairly in-depth tutorial that goes through route designs and what to look for from the defense in order to make the proper read. It probably won’t change the way series vets approach the game, but it does a nice job of explaining schemes and tries to encourage a more realistic brand of football.

Among the other tweaks, the kicking meter is a bit different, and the change has resulted in it being easier than ever to split the uprights or bury your opponent inside their own 20. In addition, play-calling has been overhauled to include copious amounts of data about each play. Honestly, it feels like too much. Hopefully it’ll get simplified — the interface, not the number of plays — for Madden 16, and maybe in the meantime a patch can address the weird hesitation when trying to move quickly through your team’s massive playbook.

Whereas last year’s next-gen version felt like a modest step above its 360/PS3 counterpart, Madden NFL 15 takes advantage of the increased power the PS4 and Xbox One afford it. Stadiums, fans and player models have never looked better, and that, combined with an overhauled presentation to simulate the feel of televised NFL football, makes it easily the most realistic version to date. There are still some odd looking faces when the helmets come off, but in action things generally look excellent.

Sadly, the commentary hasn’t managed the same strides. Delivery and flow is noticeably smoother, but the content still isn’t up to par. Jim Nance and Phil Simms routinely contradict themselves — making light of the “if a receiver can get his hands on it he should catch it” cliché one minute and then using it the next — and have a tendency to misrepresent the action on the field. It’s by far the No. 1 thing holding the Madden franchise back at this point. At least hits, grunts, quarterback cadence and more all come across very well.

Connected franchise and ultimate team check in as the primary gameplay modes in Madden 15, and pretty much anyone that’s played one of the games in the past few years should have an accurate idea what each one entails. For anyone unfamiliar, connected franchise allows you to operate as a player (real or created), coach or owner and serve in that capacity over the course of an entire career. By accomplishing goals you increase your legacy with the ultimate goal of Hall of Fame induction.

Game prep is the most significant addition this year, allowing you to allocate hours to either developing a player (by gaining experience) or boosting his confidence. The former is self explanatory, while the latter relates to another new development. This year players’ confidence will ebb and flow based on a number of factors — such as individual performance, personnel moves, whether the team wins or loses and the nature of a loss, and so on — and can have an effect on their ratings.

It’s a solid showing for connected franchise, though there are a couple of items worth noting. First, the simulated stats are pretty unrealistic on both sides of the ball. I’d imagine it’s something that can be addressed via a patch, but for now it’s bad. Second, the aforementioned ability to switch cameras at the line of scrimmage is strangely absent.

Ultimate team has been tweaked to make it more enticing to newcomers. This includes the introduction of an objective list to get you rolling with the basics of buying packs, using the online auction house and more. In that same vein, roster management has also been streamlined.

Online play, always one of the huge draws of Madden, handled nicely in the handful of games we were able to find. Of course, it’s impossible to make a definitive judgment before launch day arrives and brings thousands and thousands of pigskin enthusiasts into the mix. If history is any indication, though, expect things to run smoothly.

One last mode worth mentioning is The Gauntlet, which is tucked away with the skills trainer. This is a collection of mini games along the same lines as the last Backbreaker title and offers a fairly enjoyable one-off of the skills challenges with boss scenarios every five levels.

It may have taken a year, but Madden NFL 15 is the next-gen football experience we were waiting for. The improved graphics and presentation bring you that much closer to Sunday, and the increased focus on defence makes for arguably the most enjoyable two-way Madden experience in years.