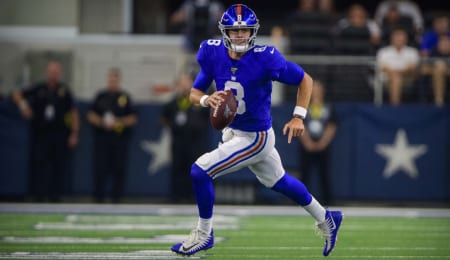 Today marks the debut column for our newest Fantasy football expert, Lucas Chan. Each week, he will break down the Thursday Night Football matchup to help you decide who to play on your Fantasy teams.

The G-Men (2-3) travel to New England on a collision course with Sith lord Bill Belichick and his suffocating defense (by the way, would it kill this dude to crack a smile given his team’s performance? See video below…).

Quarterback Daniel Jones faces a defense that is giving up just 160 passing yards per game and limited QBs to a passer rating of 44; elite even by historical standards. Ranked at the top in every significant pass defense category while generating 24 sacks through five weeks, New England’s defense renders Jones is a hard fade in two QB leagues.

New York’s interim running backs, Jon Hilliman and Elijah Penny, won’t fare any better against the New England’s stout run defense. The Pats are giving up just 78 yards per game (third after Tampa Bay and Philadelphia) and 4.3 yards per carry with just two rushing touchdowns allowed all season. Both Hilliman and Penny are unplayable this week. If you must, Hilliman is the better dart throw RB4 at 66 per cent snap count.

It is incredibly hard to rely on any Giants pass-catcher besides Engram because of wildly varying snap counts. Given Belichick’s tendency to stick his CB1 on pass-catching tight-ends (i.e., Stephon Gilmore on Engram), Sheppard is likely to match up against CB Jason McCourty, who ranks eighth in coverage rating, allowing 31 yards per game with a passer rating of 60.5 and one interception. With superior deep zone defense, Sheppard’s ADoT (average depth of target) of 12.3 yards will work against him as New England is content with giving up short passes.

Slayton is a faster replica of Sheppard in a similar matchup. Standout CB4 J.C. Jackson will be asked to jam and trail Slayton, allowing safeties Duron Harmon and Devin McCourty to play over the top. Slayton’s team-high AdoT of 17.3 yards will work against him, albeit making him the better low-end WR3 dart throw. Allowing a passer rating of 61.3, Jackson is no slouch either…

Tate is likely to see a lot of slot-hybrid CB Jonathan Jones. Jones boasts league’s third best coverage rating, giving up 21 yards per game and a 47.9 passer rating, and he’s got one pick. Tate has the “best” matchup on paper as his AdoT of 2.8 yards reinforces his transformation into a check-down machine.

As mentioned above, lone bright spot Engram will be locked down by world class CB Gilmore. Look for Engram to clear four receptions for 50 yards against a defense that allows only three fantasy points per week to opposing tight-ends.

If home field advantage exists, it resides in Foxborough. Tom Brady has a Charmin-soft matchup against the bottom feeding Giants who are coughing up 279 yards per game and a 106.7 passer rating. At home in 2019, Brady produced a higher completion percentage, two fewer interceptions and a passer rating of 113.6 versus 89.3 on the road. Expect the old man to put up QB1 numbers.

Sony Michel found his footing last week, rushing for 16-91-1 and adding three receptions for 32 yards. While New England’s backfield remains bullish, his nagging inefficiencies linger. With that being said, expect Sony to rush 15-to-18 times with a touchdown against a defense averaging 130 rushing yards per game. Perhaps not surprisingly, James White’s snap count and touches are dependent on how competitive the game is. Expect the high floor, low ceiling RB2 to continue averaging his 7-to-8 catches on 30 air yards. Rex Burkhead’s snap counts: 46 per cent, 24 per cent, 75 per cent, 18 per cent and 0 per cent. Even more puzzling, his usage doesn’t correlate to his time on the field. Best described as a change of pace decoy, Burkhead offers some flex value.

Probable-designated slot receiver Edelman has the best matchup on paper against CB Grant Haley. Weak to passes down the seams, Haley has coughed up seven receptions for 81 yards and two touchdowns; a 119.9 passer rating. Edelman is in a great spot to produce WR1 numbers barring the game running away.

Probable-designated Gordon has the “hardest” match-up on paper against CB Janoris Jenkins. The inconsistent cornerback has allowed 28-424-3 with an interception for a 112.3 passer rating in coverage. Owners should be confident in Gordon’s ability to capitalize on big plays this week.

Dorsett’s descending snap count combined with Meyer’s ascending play time is worrisome for the change of pace receiver. Dorsett has an excellent matchup against rookie CB Deandre Baker, who has allowed 17 receptions for 314 yards and two touchdowns. With Baker allowing a passer rating of 144.7, expect Brady to target whomever the rookie is covering. Dorsett is a boom-or-bust WR3. On an adjacent note, New England has run two wide receiver sets 48 per cent of the time and in this formation, Edelman is most likely to see Baker.

Tight ends in New England have fallen back to a pass-blocking role. Accounting for just 6 per cent of Brady’s targets, neither LaCosse nor Izzo should be on your roster.

Australian Roman Catholic nun Sister Janet Mead recorded this groovy version of “The Lord’s Prayer,” in 1974, and for about five seconds, made religion funky.

Now it’s your turn. Let us know who in the comments below you’re targeting in this matchup.