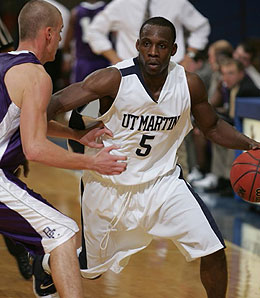 Lester Hudson has been doing it all for UT-Martin. (Photo: Tennessee-Martin)

The University of Tennessee-Martin is not exactly a powerhouse school, but it is a Division I program. Regardless of how little known the team is, Lester Hudson is letting himself be known. The 6’3″ junior guard from Memphis, Tenn., is averaging 25.8 points per contest, good for third in the nation. He is also pulling down 7.8 boards per game, an unheard of amount of rebounds for a guard.

If it were not for academic troubles out of high school, Hudson would have been a sure fire recruit to schools like Memphis, Florida, or another powerhouse. Instead, he landed at UT-Martin and he’s made a name for himself, registering the first ever quadruple-double in men’s history with 25 points, 12 rebounds, 10 assists, and 10 steals in a contest against Central Baptist College.

Not impressed by his quadruple-double against a Division II opponent? Well, try this on for size: In his team’s first game of the season against currently ranked and undefeated Memphis, Hudson poured in 35 points and pulled down 10 rebounds. He also scored 36 points and had nine rebounds against Vanderbilt.

He has scored in double figures in every contest this season except one against Tennessee Tech where he just missed with nine points.

Hudson has helped his squad to a bid in the Ohio Valley Conference Tournament, while at the same time making a name for himself amongst the scouts.

Despite his monster stat line in his first year in Division I, Hudson is undecided whether he will turn pro or not. “I still think there are a couple more levels out there for me,” Hudson said. “I think I’ll probably be back next year, but you’ve also got to look at your opportunities,” he recently said. If Hudson does decide to bolt to the pros, keep your eye on him in the future and expect him to have an impact wherever he lands.

The Purdue Boilermakers currently sit in first place in the Big Ten Conference. What? Yeah, I am shocked too! Currently ranked 15th, the Boilermakers are at 21-6 overall with a 12-2 conference record. They have three players who are averaging double figures, with the high coming from guard E’twaun Moore and his 11.9 points per contest. Despite last night’s loss to the inspired Indiana Hooisers (who were probably playing their last game for coach Kelvin Sampson), the Boilermakers still sit in a nice position with a weak final five conference games, meaning the Big Ten title should be theirs.

The expanded version of Who’s Hot and Who’s Not will return next week, but in the meantime, here are some players to watch:

Chris Lofton and his Tennessee Volunteers travel to in-state rival Memphis to take on Joey Dorsey and the Memphis Tigers. This might be the last chance a team has to upset Memphis before the NCAA tournament, as the rest of its league schedule is less than difficult. The matchup pits a number one and a number two ranked team, the first such meeting this season. One thing is for certain, there will be plenty of NBA scouts at this one.