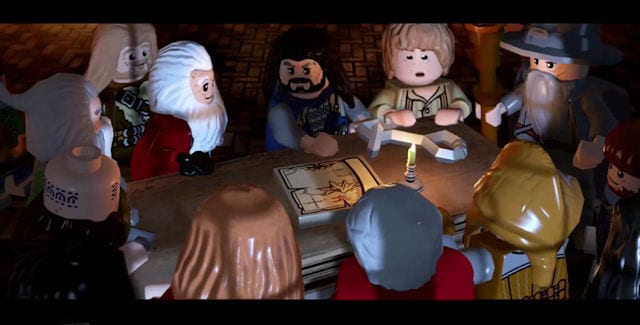 So far, director Peter Jackson hasn’t worked the same magic with The Hobbit that he did with The Lord of the Rings, resulting in an uneven pair of films saturated in CGI and goofy, slapstick fighting. It’s still the lore-rich world of J.R.R. Tolkien’s Middle-Earth, though, and that means it’s ripe for a video game adaptation. And this time, we’re melding that fiction with bricks… lots of bricks, in LEGO The Hobbit.

There’s not much complexity behind the game as most combat encounters can be handled by simply mashing away on the attack button — not that there are really any other options as blocking and dodging are non-existent in the world of LEGO (unless you count the diving roll). Despite the simplicity, LEGO The Hobbit does run into a couple of issues.

First, interacting with objects can be a little finicky at times, forcing you to make minuscule adjustments until the appropriate button appears on screen. However, due to the game’s forgiving nature it’s not much of an issue. The other annoyance is when controlling characters (most notably Gandalf) with both ranged and melee attacks as the game can’t seem to decide which action you wish to perform, often making you vulnerable to cheap hits when you shouldn’t be.

Adorable recreations of characters and locations throughout Middle-Earth keep the level of charm and enjoyment running at a brisk pace throughout LEGO The Hobbit. The developers once again do a nice job of recreating the source material while still tossing in little moments of slapstick humour — like Bombur’s ongoing use of a sausage or the random appearances of pigs, sharks and other critters in silly spots.

Our lone complaint about the graphics is that, with so many similar-looking dwarves it can become something of a chore to keep track of which one is holding the necessary item (or possessing the needed skill) to solve a particular puzzle. Granted, the game often makes them jump around to draw attention, but there are moments when we found ourselves cycling through trying to jog our memory.

Dialogue and many of the tunes are ripped straight from the films so they’re high quality. All original elements (such as the sound effects) are solid as well.

As you may have guessed based on its release date, LEGO The Hobbit covers the events of the first two films of Jackson’s cinematic trilogy (An Unexpected Journey and The Desolation of Smaug), rolling credits just as Smaug descends on the hapless residents of Lake-town.

Although the game makes some concessions here and there to allow for a co-op partner — Radagast enters Dol Guldur with Gandalf, a disoriented goblin accompanies Bilbo Baggins for his encounter with Gollum — it does a good job of turning most of the films’ signature events into enjoyable levels.

There is a mix of combat, platforming and puzzle solving here, though nothing you encounter is likely to befuddle or frustrate for long. Then again, that’s not really the point of LEGO titles, as they’re much more about fun and accessibility, both of which are present here in great quantity. The developers throw a few new tricks your way to mix up the formula in the form of mini games, but there’s nothing particularly innovative under that banner.

LEGO The Hobbit is split into two main categories with cinematic-based story missions and a litany of secondary quests triggered by wandering around the open-world sections. If you stick to the story you should be able to wrap the game in around six or seven hours, but it’s meant to be revisited in “free play” (unlocked upon completion of a level) as many of collectibles can only be obtained via the unique abilities of characters that aren’t in your original party.

That begs the question as to how excited you are to replay the same sections with a new cast simply to hunt down blocks, collect studs (LEGO’s in-game currency) and unlock more characters. If you’re into it then there’s a ton to do, especially if you’re aiming at a 100 per cent run. If once is enough, however, you may find the amount of content lacking. It’s very much a “your mileage may vary” experience.

Technical hiccups were disappointingly prevalent, with items needed to complete a section sometimes disappearing or failing to appear when they should. For instance, in an early chapter in which Bilbo must feed the dwarves, one of the food items remained suspended in mid-air after we’d destroyed the cabinet holding it. That forced us to restart the level and try again. We also had the game freeze up entirely on us a couple of times.

Co-operative play is available, but we weren’t particularly impressed with the camera. When both players are close enough to be viewed on the same screen it’s fine. When they move apart, though, the screen splits diagonally. It’s a disorienting switch, one that is made eminently more tolerable by the game’s casual nature.

If you enjoy LEGO titles, LEGO The Hobbit is a strong entry, taking Jackson’s source material and weaving in the bricked charm to create a fun ride. There’s precious little challenge, however, and its longevity figures to vary significantly from one gamer to the next.