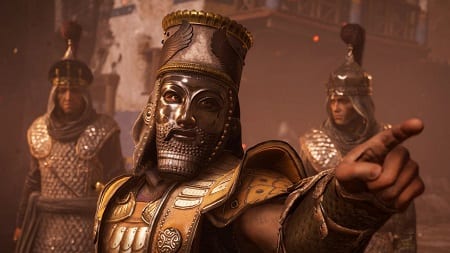 Assassin’s Creed Odyssey did many, many things right — in fact, it was this reviewer’s favourite game of 2018. However, longtime series fans probably noticed that the game didn’t always feel like Assassin’s Creed, and part of that had to do with the lack of the game’s signature weapon: the hidden blade.

That’s remedied in the first major piece of downloadable content for the game, Legacy of the First Blade: Hunted. The DLC takes an Assassin from established canon (longtime fans will find protagonist Darius referenced during Ezio‘s adventure in Assassin’s Creed 2) and puts him front and centre for three episodes.

This episode takes place in the Macedonia region of the Ancient Greece map (northeast side), giving you about four hours of additional gameplay that ties into the previous Origins game as well as Odyssey. The missions are fairly contained in the region, though they do sometimes feel more like a sampler platter of all the different elements of Odyssey rather than a driven storyline.

So what exactly happens in this episode? From a gameplay perspective, you’re looking at missions very similar to hunting down the Cult of Kosmos, with a side trip out to sea, and overall mission structures that feel a little more like the core of the series.

Also, you can earn a new skill called Death Veil, which then propagates into your player. Death Veil is designed to help your stealthing strategies by causing assassinated bodies to disappear — this is particularly handy in the DLC as it is more traditional series stealth compared to the bulk of the main game.

By the way, you’ll need to be at least level 28 to open up the DLC quests, which means you’ll probably need to have sunk about 25-to-30 hours into the main game. If you’re into upgrading and crafting, the episode also provides Legendary inventory and unique engravings to earn.

While not particularly different, the first episode of Legacy of the First Blade should appease fans of Odyssey who want to hang out with their favourite Misthios — and hardcore fans will appreciate the connective tissue explored with longtime series lore.