Posts Tagged ‘Lara Croft and the Guardian of Light’

Video Game Review: Lara Croft and the Temple of Osiris 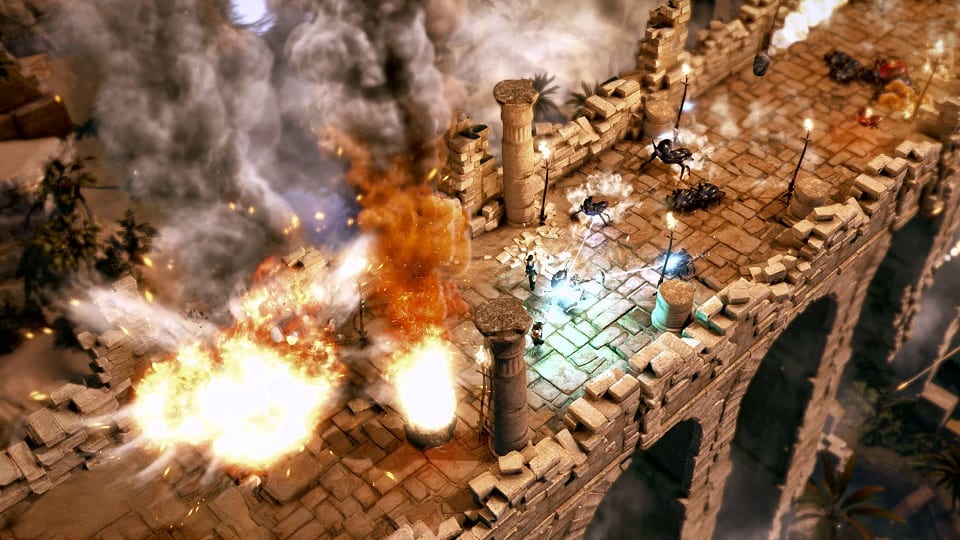 Beetles. Why’d it have to be beetles?

After seemingly getting a little long in the tooth, Lara Croft has enjoyed a nice renaissance. Starting with 2010’s Lara Croft and the Guardian of Light and continuing with the 2013 reboot Tomb Raider, Croft has re-established herself as one of gaming’s top heroines. Square-Enix looks to keep things rolling with Lara Croft and the Temple of Osiris, a sequel to the Guardian of Light spin-off. So gather up your friends, it’s time to raid some tombs.

Played from an isometric perspective, Temple of Osiris is built around quick movement throughout the levels and strafing when in combat. It’s a formula that handles well enough by adopting the usual twin-stick shooter setup for moving and aiming, though here you’ll need to manually pull the trigger. An evasive role is effective in staying out of range from enemy attacks, and the ability to drop and then detonate explosives with two separate button presses allows for a little strategy.

Things get a little overly busy when soloing the game, however, as you’ll need to execute (and then hold) button combinations that feel somewhat unnatural. This is especially true when using the staff, which must be active to raise certain platforms or keep time-sensitive bombs from exploding. In what will no doubt be a theme of this review, the game performs better in multiplayer scenarios in which excessive button holding is largely unnecessary.

Although Temple of Osiris isn’t a visual powerhouse, it gets some good mileage out of smart temple design and lots of pleasing effects from weapons and enemy projectiles. The camera is pulled way back most of the time, obscuring details and making it easy to lose track of your character at times during multiplayer sessions, but it’s necessary to allow for puzzle solving and combat.

There isn’t a lot going on in the audio department with mediocre voice acting telling a minimalistic story in tiny post-level snippets. The soundtrack is decent enough, though, and the effects do a solid job of keeping things lively.

Story wise, there’s really nothing to sink your teeth into. Basically, Lara and another adventurer stumble upon supernatural happenings in Egypt. This allows you to team with lesser gods Horus (son of Osiris) and Isis (wife of Osiris) to drive the evil god Set back into the netherworld. As with Guardian of Light, it’s not meant to be more than a superficial MacGuffin to keep you moving forward.

Action in Temple of Osiris is split into three categories: combat, puzzle solving and light platforming. The combat follows most twin-stick shooters with enemies spilling out from crevices and chasing you around while you roll and shoot to keep them at bay. There are a couple minor curve balls — enemies that carry shields, create flame trails, shoot projectiles of their own, etc. — but it’s never enough to make you vary your tactics (with the exception of cycling through weapons).

Puzzles do a nice job of presenting a challenge without being so difficult that you routinely get stuck. New gameplay devices are introduced throughout the game, such as reflecting light via mirrors to hit multiple points or transporting a ticking bomb to destroy a vulnerable section of wall, and it helps keep the various temples feeling different.

While all the puzzles and temples can be completed alone, Temple of Osiris is meant to be played with other people (it supports up to four). That means the game actively changes things up in terms of layout so that teamwork is a necessity. For instance, in single player, Lara may be able to grapple over a chasm to advance. In multiplayer, she’ll no longer be able to reach the other side alone. Instead, her grapple becomes a tight rope that another player can walk across.

Each temple you enter features a set of objectives that’ll earn you rewards for completing them. This includes bronze/silver/gold point thresholds, a speed-run time, finding all the hidden red skulls and then a few level-specific ones — like using the environment to kill X number of enemies, lighting all the braziers and so on. It’s effectively impossible to do them all at once, which encourages you to revisit temples and target specific objectives.

Upon completion you’ll find yourself in a room filled with treasure chests, each of which requires a set number of gems (collected throughout) to open with higher costs yielding better loot. It’s no Diablo III to be sure, but you can do a fair amount of customizing by equipping different rings and amulets, which provide unique buffs. There are also a healthy number of guns, including legendary variants, which allow you to bring the pain however you see fit.

Beyond the main stages, there are five challenge tombs to test your puzzle-solving acumen. They’re not all that challenging, though, particularly if you’ve finished the main game and had plenty of practice with the mechanics they employ. Combat challenges can be found in the overworld area as well as hidden goodies like skulls and permanent ammo/health gauge increases.

Probably the biggest knock on Temple of Osiris is that it isn’t all that different from Guardian of Light, which came out more than four years ago. Given that we thoroughly enjoyed the original it doesn’t feel like that big of a deal, but those that crave innovation may be disappointed. Also, as noted, the game isn’t nearly as fun alone, and, in fact, is at its best during local co-op in which strategies can be discussed in the same room and laughs over an untimely death can be shared.

Square-Enix has continued Tomb Raider’s positive momentum with Lara Croft and the Temple of Osiris, an entertaining and enjoyable romp through ancient temples with guns, puzzles and enemies aplenty. If you’re looking for a co-op fix, you can’t go wrong here.