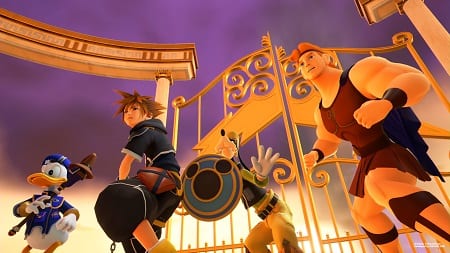 If you were hoping for a Frozen image you’ll have to, well, you know…

When you consider the number of one-offs, remakes and remixes that Square-Enix has churned out, it’s easy to forget that it’s been nearly 15 years since the Kingdom Hearts series got a proper numerical sequel — hell, it’s been almost six years since Sony gave fans their first taste at E3 2013. However, Square-Enix and Disney have finally brought Kingdom Hearts III to the masses, even giving Xbox fans their first chance to experience the series. Amid huge hype and expectations, it’s time to see if Sora, Mickey and the rest can deliver.

Combat is probably best labeled as third-person hack n’ slash, though that’s a very basic overview of the game’s often frantic encounters. You once again control Sora, who is flanked by Donald Duck and Goofy, as you square off primarily against loads of Heartless and Nobodies. You’ll also be joined at times by additional world-specific characters, but that trio remains the core unit.

Although mashing the attack button constitutes a fair amount of what you’ll be doing, the game adds plenty of bells and whistles to keep things moving at a brisk pace. In addition to melee attacks, Sora can also use magic and switch between keyblades on the fly, allowing you to employ a number of unique attacks. As you land blows you’ll also build momentum to change forms and unleash more powerful strikes.

Your allies generally hold their own, and you’ll be able to team up with them for various tandem efforts to deliver extra damage (and plenty of visual pizzazz). Attack an enemy designated with a green circle and you’ll unleash something called attraction flow, which allows you to summon a handful of Disneyland rides to lay waste to entire groups of foes. With all the various strikes, switching between keyblades and flashy attacks there’s rarely a dull moment during combat.

Not everything works great, however, and that begins with flowmotion, a system designed to let Sora do things like spin around pillars or slide down rails. Objects that you can interact with have a rippling shimmer of sorts, making them easy to spot, but in the heat of battle it felt sloppy and not as instinctive as it should have. Locking onto and cycling through enemies often seemed to be more trouble than it was worth as well.

Given that all the previous entries were native to either handhelds or the PS2, it goes without saying that Kingdom Hearts III is far and away the best looking of the bunch. It’s pretty cool to see how well the various Disney worlds were recreated, and the addition of Pixar allows for arguably the game’s top two locations. The way Sora and company change visually as they visit certain worlds is a nice touch, too.

Even though most of the Disney characters voiced in the films by stars have been replaced by anonymous sound-a-likes, the familiarity works to the game’s advantage, allowing them to appear and instantly carry context. There’s good music, plenty of fun sound effects and Haley Joel Osment returns to anchor everything as Sora.

Kingdom Hearts III opens with Sora seeking to regain his lost power of “waking” in an effort to take down the villainous Xehanort, who nearly defeated Sora previously. It’s an arc that most should be able to follow, at least at the big picture level, but it’s fair to say that anyone who hasn’t kept up with the series over the years will spend time scratching their heads — the game does contain some refresher tutorials, but they’re not remotely comprehensive.

On the one hand, Square-Enix did yeoman’s work in trying to prep a new audience for KH3 by updating and re-releasing previous games on the PS3 and, eventually, the PS4. On the other, none of that was available to Xbox One or 360 owners, making this a pretty challenging point of entry for those loyal to Microsoft’s systems. Suffice to say, longtime fans will get more out of the game since they’ll understand the story’s various sub-threads and payoffs.

Minus that context, newcomers will need to rely on action and locations to carry the day, and thankfully both areas offer up far more pros than cons. In addition to the chaotic combat outlined above, each world conjures up some type of unique twist to keep battles fresh, such as piloting toy robots in the Toy Story world or ship-to-ship encounters in Pirates of the Caribbean.

Exploring the locations of Disney movies is (and always has been) one of Kingdom Hearts‘ most endearing aspects, and it’s not hard to smile when directly interacting with Woody and Buzz or Baymax. That being said, some worlds are undoubtedly more interesting than others. Of the group, we found Tangled to be the most disappointing — it just felt kind of empty, and we never warmed to the dancing mini-game.

Getting from Point A to Point B is still done via the Gummi Ship, and though it has received some much needed attention, allowing you to do some exploring and customizing, it never felt like something we actively wanted to do. Instead it’s just the thing we did to advance the game and reach the next world. No more, no less.

If you’ve tracked the series this long, then Kingdom Hearts III is a no brainer as it brings closure to a lot of plot threads that have been left open for years. Newcomers simply won’t get the same experience even though the game is full of enjoyable elements when viewed purely as a standalone. One disappointment for us, though, is the marginalizing of the Final Fantasy influence, making this feel more like a pure Disney game than its predecessors.

In the face of some lofty expectations, Kingdom Hearts III delivers the goods. While it’s by no means perfect, its fast-paced combat and endearing characters make it worth your time.