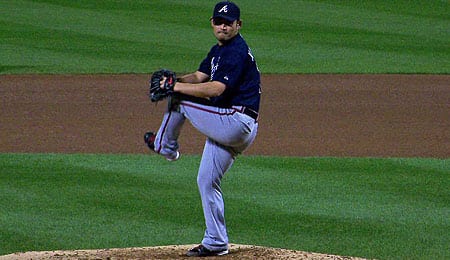 Kenshin Kawakami took some early lumps, but settled in nicely in his first North American season.

At the risk of pissing Tim off by stepping on his turf, I’m going to take a look today the Braves’ first NPB import, Kenshin Kawakami. Was his first season in North America a success?

His strength in Japan was limiting baserunners, putting up a career WHIP of 1.14. Kawakami was particularly strong in this area in his final season of NPB ball in 2008.

In our most recent starting pitcher cheat sheet, we ranked him No. 80, but a solid second half has definitely moved him up a few pegs, into the top 75.

Late in the season, Kawakami was shifted to the bullpen, but this wasn’t a reflection on his poor play. In fact, after a rough April, he enjoyed a very strong season. His ERA after that tough start was 3.38 – pretty darned impressive by any standards, but even moreso for a pitcher dealing with the culture shock of a new world.

The reason Kawakami was shifted to relief after 25 starts was two-fold: Tim Hudson has returned from Tommy John surgery, giving the Braves an abundance of healthy starters, and the team was concerned with his increased workload (the Japanese season is shorter, so Kawakami had never made more than 24 starts before).

At any rate, he adjusted well, putting up a 2.63 ERA in his seven relief outings.

Even though as a major leaguer Kawamaki was a bit more susceptible to the longball, wasn’t able to duplicate his big strikeout totals and was more hittable, you’d have to consider his debut a resounding success. He was much better after the All-Star Game, and has positioned himself as a solid Fantasy starter for 2010.

The only question is will he be a starter, or will he even still be a Brave? Some have suggested he could be dealt this offseason, but I think the chances of that are slim. Still, the Braves do need to make a move to clear up a rotation spot. The most likely scenario would see either Javier Vazquez or Derek Lowe dealt this winter – a move which would allow Kawakami to move back into the rotation in 2010.

We expect him to be a must-own NL-only league starter and very likely to be of use – at the bare minimum – as a spot starter in mixed leagues.