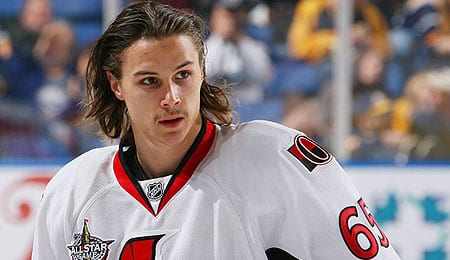 Erik Karlsson and his cheesy ‘stache have soared up the rankings after his crazy ass breakout.

The 2013 RotoRob NHL Draft Kit surges forward today as we get into the meat of it with our first cheat sheet. So now that accelerated buyouts have been agreed upon, let’s review the top 40 defenceman.

There are gems and sleepers to be had. Justin Schultz was lights out while playing for Oklahoma City and he earned a place on this list without playing a single NHL game. When a player averages nearly 1.5 points per game even on the AHL level, it is noteworthy and at least somewhat an indication of the talent translating to the highest level.

1. Shea Weber, Nashville Predators (8): With Niklas Lidstrom finally retired, it is now Weber’s time — or at least we think it is. Granted, Ryan Suter left for Minnesota in the offseason, but let’s be honest, Weber is the big reason why Nashville’s D is so good. Add his perennial penchant to fill categories and end up around 50 points and it’s little surprise why he tops the preseason charts. Can Weber live up to the lofty expectations? We will soon find out.

2. Erik Karlsson, Ottawa Senators (20): Karlsson did not only break out, he just plain exploded for Fantasy owners last season. It almost seemed like the entire offense revolved around him and it resulted in improved plus/minus numbers and a second-half goal spike. There were some concerns like Karlsson’s mere three power play goals despite nearly 80 shots taken on the man advantage. However, a near point a game defenceman is pretty rare and Mike Green certainly won’t do that anytime soon.

3. Dustin Byfuglien, Winnipeg Jets (2): It was tough to drop Byfuglien given he had 53 points in just 66 games but Karlsson’s rise was too hard to ignore and Weber should be allowed to play “full out” in a 48-game schedule. Byfuglien’s team has a tougher travel schedule than most and that may play a factor. However, the guy can shoot the puck and be a force on both sides of the ice. He also plays a punishing brand of hockey like our No. 1 defenceman. That alone allows Byfugline to maintain at least a top three spot in our rankings.

4. Zdeno Chara, Boston Bruins (4): This seems like a good spot for Chara who still has an immense, booming shot but may regress a bit offensively. The blueliner still figures to have around 35 points in the shortened season and can fill that SOG category like few can. The +/- is always an asset and the 2.2 hits per game never hurts either. For icing on the cake, Chara’s eight power play goals were third among all d-men. Enough said… go get him!

5. Kris Letang, Pittsburgh Penguins (12): Letang was on the verge of a Fantasy breakout twice in the last two seasons before injuries (Sidney Crosby, then his own) derailed the ascension. Full health, a shortened season and Evgeni Malkin and company will mean some big totals and a fattened bottom line results for Letang owners. This was a player who had 39 points in 41 games two seasons ago. It would not be a shock to see him come close to that this season.

6. Tobias Enstrom, Winnipeg Jets (6): Enstrom and Byfuglien can wreak havoc with the best of them but let’s face it, Enstrom was far from healthy for long stretches. When he was, production was not an issue. The duo is healthy now and Winnipeg does have some fairly dynamic offensive talent. Expect a nice bounce back as far as points per game for the more unheralded half of the duo.

7. Drew Doughty, Los Angeles Kings (11): Doughty and his team wound up winning the Stanley Cup but the regular season run was a bumpy one that saw a coach get fired and nearly a GM as well. In a shortened season, he is a player that could start off hot and not cool off very much. Will there be a Cup hangover? Probably not. In this instance, the reduced schedule might actually be a blessing rather than the usual curse.

8. Alex Edler, Vancouver Canucks (16): Edler nearly had a 50-point season in 2011-12 while playing on the unit that backs up Daniel and Henrik Sedin. The nearly two blocks and hits per game also helps fill those categories. That is the bottom line about Fantasy blueliners. Fill those categories and make it easier on yourself. Edler will do that again especially in a shortened season — even without some healthy parts surrounding him.

9. Alex Pietrangelo, St. Louis Blues (38): Playing with Kevin Shattenkirk was like a dream for a guy that many thought would blossom right around this time. Last season came Pietrangelo’s first 50+ point campaign and really it was just the tip of the iceberg. This season does come with more expectations and Pietrangelo looks even better in camp than he did last season. It should mean another solid season playing in a system where the defenceman has to jump in the play.

10. Mark Streit, New York Islanders (9): Throw out the -27 ranking and embrace the 40 assists instead. With a dynamic lineup that can put up goals in bunches at times, Streit has more value than most think. Yes, he takes risks that cost but the point production is too much to pass up. The offense on Long Island has improved a bit so don’t be surprised if his points per game does too.

11. Dan Boyle, San Jose Sharks (7): Boyle slides a little bit more because of the shortened season. As vets get older, they lose a little at some point. It is not easy to play 25-to-27 minutes a game and do it basically every other night. At some point, the production will drop for Boyle and though it may not be noticeable this season, some of the numbers may take a tumble. Let’s see what happens.

12. Brian Campbell, Florida Panthers (34): When you have 30 power play assists, you are going to gain notice. Now, Jason Garrison has left for Vancouver but Florida still has some very lethal parts on a power play that can catch fire at any time. Disregard Campbell’s +/- and low goal and SOG totals because the assists will definitely be up there again. Florida may fall a bit in the standings, but its offense should remain solid.

13. Oliver Ekman-Larsson, Phoenix Coyotes (NR): It seems the time is now for Ekman-Larsson. His 13-goal, 32-point season was just a beginning of sorts. Some even think that he could supplant Keith Yandle as Phoenix’s number one defenceman. Ekman-Larsson’s movement was on display with the Portland Pirates of the AHL before the lockout ended. Expect numbers that could be close to his full season totals from a year ago.

14. Keith Yandle, Phoenix Coyotes (5): The drop for Yandle was expected as Ekman-Larsson started to really heat up over the last 20 games. If Yandle and Ekman-Larsson can work together to help the offense, that is like having two No. 1 defencemen on the roster. That is how wins can pile up and in a 48-game season. Phoenix needs a rejuvenated Yandle for it to go places.

15. Kevin Shattenkirk, St. Louis Blues (37): Shattenkirk rose from the ashes of Colorado in the Erik Johnson trade and produced a 43-point season with a very solid +20 ranking. Can he and Pietrangelo do it again? The answer is more than likely a resounding “yes.” Fantasy hockey owners should have Shattenkirk in their sights.

16. John Carlson, Washington Capitals (23): Carlson is going to benefit from the likely uptick in production from Alex Ovechkin. Carlson is a very gifted player on both sides of the ice and it seems he’ll only get better. Will he take that next step this season? Honestly, it won’t be a big step but in keeper leagues, this is a player you want on your team now rather than later.

17. Kevin Bieksa, Vancouver Canucks (32): Bieksa is one of those guys that seems to always find his way around these lists. The talent is always there but seems to be hiding in the weeds at times. He had a 40-plus point season and looks poised to be around the 25-point mark this season. Bieksa is a low grade category stuffer. When you are at or above 100 in PIMs, hits, and blocks, that is an excellent sign.

18. Ryan Suter, Minnesota Wild (36): Suter finds greener pastures in the Minnesota organization along with Zach Parise. Can Suter shoulder the load as “the guy?” Some say yes, but most say no. The truncated schedule does help a good bit. Expect a good season with some power play upside and that is about it. His +/- may be a bit questionable though and combined with some other numbers to make us drop him a bit from where we thought about putting him.

19. Michael Del Zotto, New York Rangers (NR): Last season was not a fluke and although Del Zotto has some god awful habits behind the blueline, he does have a tendency to make up or atone for his own mistakes. He has problems finishing on the man advantage, but his near two hit per game average makes him a target for more than just his point potential. With the top line in Gotham, expect more of the same this season.

20. Niklas Kronwall, Detroit Red Wings (44): Kronwall has some really big shoes to fill as Lidstrom retired over the summer. Kronwall had 36 points last season as he learned the role and now is poised to basically be on that No. 1 pairing. Expect some pretty big things and the same, usual punishing game that Kronwall brings. Add in a shot that keeps getting better and the numbers might even go up a bit.

Stay tuned, ladies and gentlemen, there are more rankings to come and we do appreciate your input. Thanks again and we hope you enjoy the 2013 RotoRob NHL Draft Kit.