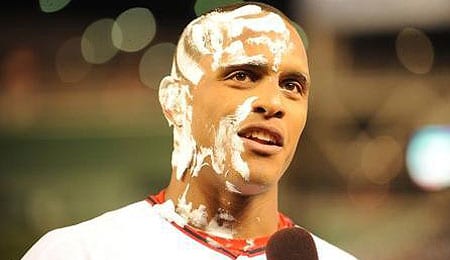 Justin Maxwell can expect plenty of face pies if he keeps drilling it like he has lately.

Tim McLeod is buried under a pyramid of potato chips this week, so the Wire Troll falls to your faithful editor.

Let’s get to it this week’s Fantasy baseball waiver wire recommendations.

Justin Maxwell, OF, Kansas City Royals: We recommended Maxwell in our season debut of the Wire Troll, but it wasn’t our finest hour as his PT waned in Houston. However, a recent trade to KC, combined with Lorenzo Cain’s injury, has allowed Maxwell to gain a nice foothold. Maxwell is getting a chance to start against righties as well as his usual southpaw assignments, and he’s been doing the job, hitting safely in seven of eight games as a Royal and flashing his opposite field power (see video below).

Alex Wood, SP, Atlanta Braves: Just last week, we mentioned how Wood was looking more comfortable in each start he’s made. Well, that trend continued Saturday with six goose egg innings in which he gave up just two hits and one walk against seven Ks. Wood retired 12 straight at one point, but came away with a no-decision as the Braves failed to support him as their 14-game win streak came to end.

Bruce Rondon, RP, Detroit Tigers: Slowly, but surely, Rondon is starting to get it. Okay, so he lost his chance to break camp as the Tigers’ closer, but he’s generally been very strong since Detroit brought him back at the end of June. Sunday, he earned his first career win with two shutout innings, following that up with two perfect innings Wednesday and 1 1/3 hitless innings Friday. Rondon is now a deep AL-only league asset and remains a sweet keeper league consideration.

Robbie Grossman, OF, Houston Astros: Grossman earned a Wire Troll recommendation from us when he was recalled in April, but clearly he was not ready for prime time and was sent back down. Since coming back to Houston in late-July, he’s been on fire, hitting safely in 11 of 12 games while flashing some speed and surprising power (on Wednesday, he homered for the second straight game and added a double).

Joe Kelly, SP, St. Louis Cardinals: Over his last four starts, Kelly has given up two runs. Total. In fact, since he’s moved into the rotation from long relief, he’s been a different pitcher. Expect Kelly to keep the good vibes going Sunday against a weak Cubs’ attack.

Cody Ross, OF, Arizona Diamondbacks: In mid-April, we gave Ross some Wire Troll love, but it wasn’t our finest hour as he’s pretty much struggled all season. However, he showed signs of life in July (.301 BA, .479 SLG, nine runs) and has really turned it on so far in August (.375 BA, .394 OBP, six RBI and five runs), so has been flying off the wire as a result. Grab Ross while you can as he has 15 hits in the last nine games including two dingers.

Martin Perez, SP, Texas Rangers: Perez seems to have turned the corner after a rough patch and he’s coming off a career-best seven-K performance against the Halos.

Felix Doubront, SP, Boston Red Sox: Doubront has given up three runs or less in 16 straight starts, tying the longest single-season streak by a Red Sox lefty in club history. The first to do it? Some dude named Babe Ruth.

LaTroy Hawkins, RP, New York Mets: Bobby Parnell (neck) is out and old-timer Hawkins has filled the hole, earning saves in each of his last three appearances.

Louis Coleman, RP, Kansas City Royals: Buried most of the season at Triple-A, Coleman has been filthy good during his time in the bigs, tossing scoreless ball for 14 games and 16 1/3 IP.

Michael Wacha, SP, St. Louis Cardinals: In his return to the Show, Wacha was decent in a no-decision Saturday. Just note that he’s likely to shift to the pen for the time being.

Roy Halladay, SP, Philadelphia Phillies: Despite having nothing to rush back to, Halladay (shoulder) could pitch in a rehab game on Thursday.

Blake Tekotte, OF, Chicago White Sox: Tekotte was recalled after Casper Wells was claimed on waivers, and he could be worth a flier in deep AL-only leagues.

Oswaldo Arcia, OF, Minnesota Twins: Arcia has been moved up to fifth in the order and has responded with homers in each of his last three games. Yes, this kid has serious pop.

Josh Johnson, SP, Toronto Blue Jays: Johnson, coming off his best start in almost a month, has cleared waivers. Let’s hope a change of scenery (if someone wants him) will do the trick.

Adam Eaton, OF, Arizona Diamondbacks: This popular preseason breakout candidate finally seems to be over his elbow woes.

Now it’s your turn. Tell us in the comments below who you think the top waiver wire pick of the week is.