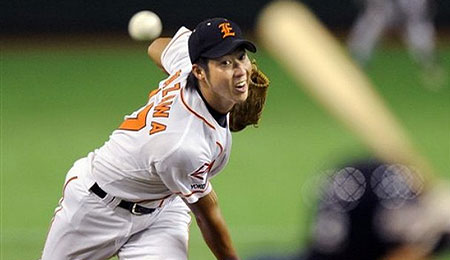 Whether he’s the next Daisuke Matszuka or Hideki “Fat Toad” Irabu, Junichi Tazawa is bringing his share of controversy to the majors. (AP photo)

Back in an article in early September we advised the world of the impending free agency of Junichi Tazawa, the starting pitcher from Nippon Oil Eneos of the Industrial Leagues in Japan. Since then, Tazawa has firmly committed to following his dream of pitching at the MLB level, the debate has stirred, the rules have changed, and Brian Cashman has attempted to immortalize himself as the eternal good guy in a recent New York Times article. Now, isn’t that just a handful to digest all in one sitting?

Let’s now move forward and take a look at some of the details. Yes, Tazawa is a free agent and as a result of his decision to seek free agency, a rather heated debate has been stirred dealing with both the “gentlemen’s agreements” between MLB and the NPB, and a series of accusations by the NPB.

There is no “raiding of players” as has been suggested over the past short while. Tazawa simply went to high school, played baseball, and when he went undrafted, he decided to ply his trade in the semi-professional Industrial Leagues. He enjoyed a breakout campaign in 2008 and as a free agent has decided that he wants to play in North America. Again, I would like to reiterate that this is not about corporate raiding, but a player in another country having the option of choosing his destiny according to the rules that are in place in his home country. He did not make these rules and guidelines, but is simply following the options that have been presented in this set of circumstances. He let everyone know of his rights and now we have a fallout and debate that has been simply blown way out of proportion.

Where was the NPB during this time, I ask? Tazawa could have been drafted and signed by any NPB team as both a high school player and as an Industrial League player and now that he is coming off a good year — make that a great year — you want the option to both have your cake and eat it too. Instead of attempting to rectify this situation by signing these players, expanding their minor league system or doing anything that remotely assumes a good and solid responsibility towards the game, the powers that be in the NPB have been pouting and crying foul, blaming their current misfortunes on everyone and anyone except whom they should be.

They had options, but now that Tazawa is coming off a great campaign, they choose to blame everyone but themselves for this predicament. Tazawa did nothing wrong. He played the game, excelled at it and chose one of the options that were available to him under the rules, namely to play his services at the MLB level as a free agent. Again, this process was initiated by Tazawa and thus the accusations of MLB raiding are in this case not warranted.

In an attempt to rectify this situation, the NPB determined that simply changing the rules would be the course it would pursue and have since instituted a new series of rules whereupon if Japanese players choose to leave as free agents they will be barred from playing in the NPB for up to three years if they ever choose to return to Japan.

This childish posturing is not going to resolve the issue, either now nor in the future.

If a free agent wishes the opportunity to ply his skills at the MLB level, or for that matter in the NPB, and has such right, what options are available? All this talk from Cashman about being the good neighbour and “gentlemen’s agreements” I find a bit trying. Couldn’t the reason have more to do with the fact that the Yanks have been burnt twice — first by Hideki Irabu and then Kei Igawa?

Under these circumstances I think it would be just a tad difficult to convince the Steinbrenner clan to cough up more cash for a 22-year-old free agent pitcher from Japan. As far as the “formal co-operative relationship” between the Yankees and Yomiuri as mentioned in the New York Times article, what exactly would that be? Brian, you’re dealing with a team that has refused to recognize the posting system, a rule that is currently in place in the league that as the most powerful NPB club, they attempt to run.

Do you think that simple chatter will change the free agency requirements currently in place in the NPB or, for that matter, provide anything that would be beneficial? You may exchange pleasantries and swap ads in your respective media guides, but other than that what is this agreement of sorts really accomplishing?

Enough ranting here, and let’s get back to Tazawa the player, not the political problem he’s become. In the recently completed National Corporate Championships, he was extremely impressive, tossing two shutouts, and allowing no earned runs in 20 2/3 IP. Tazawa has shown enormous potential this year and next season will likely bring that low-90s heat and breaking stuff to a Double-A or Triple-A park, and attempt to demonstrate that he has the abilities to excel and move up the ladder.

Not to take anything away from his fine season, but we are talking about a club team in the third tier of the Japanese game, so at this time, it would be prudent to temper your expectations. Yes, there is always the chance that Tazawa’s skills translate well and he does perform at the big league level in the immediate future, but he has a lot to prove at this stage of the game before that opportunity presents itself.

Now that the Industrial League season has concluded, Tazawa has been entertaining offers for his services from the Braves, Red Sox, Rangers and Mariners. According to an article on Friday on Japanball.com, Tazawa has rejected the offers from Texas, Seattle and Atlanta and is looking at Boston, with his final decision to be made within the next few days.

For now I say good fortunes to Junichi Tazawa as he continues his journey in the game he loves. He has done nothing but demonstrate a level of class and respect that unfortunately many of the other stakeholders in this situation have not.