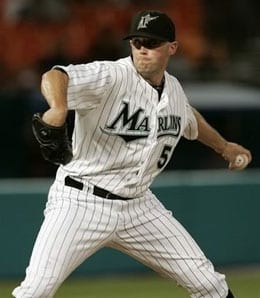 Taylor Tankersley has been a nice addition to the Fish pen. (ign.com)

On Wednesday, we reviewed the phenomenal 2006 rookie pitcher class for the American League. Now it’s time to tackle the Senior Circuit.

Florida Marlins: Well, we may as well start with a team that’s buzzword is opportunity, for that’s where the rookies will play. After all, there’s almost no veterans on the roster. Having said that, the performances the Marlins have got from their rookie pitchers has been unbelievable. Taylor Tankersley has fanned 15 batters in just 12 2/3 IP, and looks like he’s settling in nicely in a set-up role. Carlos Martinez has also found his niche as a set-up man, although he’s allowing too many baserunners. Josh Johnson was given a chance to start and has run with it, fanning 80 in 90 2/3 IP. Anibal Sanchez, a key component of the Josh Beckett deal, has been inconsistent, but has looked brilliant at times. On Wednesday, for instance, he threw seven shutout innings of one-hit ball at the Nats. Scott Olsen, when he’s not getting in Miguel Cabrera’s face, has been solid, with 85 Ks in 96 2/3 IP. Logan Kensing is another rookie hurler excelling as a set-up man. Ricky Nolasco has also looked sharp at times.

Atlanta Braves: The Braves are another team on which opportunity knocks for any pitcher — especially a reliever — who can actually get anyone out. Atlanta went el cheapo on its bullpen this year, and the results have shown. But it’s created a situation in which unproven pitchers are getting their shot. And some of them have succeeded. Ken Ray, for instance, looks like he’ll get save chances for the time being. Starter Chuck James is not striking out as many as we’d like to see, but he’s getting outs. Relievers Kevin Barry and Tyler Yates are enjoying success, a rarity in the Braves’ pen this year.

Washington Nationals: Pitching highlights haven’t been plentiful in Washington this season, but Mike O’Connor has held the team in quite a few games, and he’s managed six quality outings among his 15 starts.

Philadelphia Phillies: Cole Hamels has pitched a bit better of late, and he’s averaging a strikeout per inning.

New York Mets: This mostly veteran squad was getting superb work from Brian Bannister before he got hurt. More recently, last year’s top pick, Mike Pelfrey, has begun to make a contribution with a pair of solid starts.

St. Louis Cardinals: The Cards have had some pitching issues this year, but recently recalled Anthony Reyes has helped stabilize the rotation and looks like he’ll stick all season. Reliever Adam Wainwright has possibly been St. Louis’ most consistent pitcher in 2006 and he’s worked his way into a set-up role.

Milwaukee Brewers: The Brewers have failed to take the next step forward this year, and a big reason why is their pitching failures. But Jose Capellan has finally delivered on his promise and looks like a solid set-up man. Swingman Carlos Villanueva, up earlier in the season, showed a lot of promise. Expect him back soon. Probably sooner than Neil Smith’s tenure as the Isles’ GM.

Houston Astros: Fernando Nieve has performed admirably in a swing role while Taylor Buchholz’s periperhals suggest a much better season than his ERA does. A propensity for throwing the gopher ball has hurt Buchholz, but if he can reduce the long ball rate, you can expect greater results in the second half.

Chicago Cubs: Pitching, the Cubs’ main strength in recent years, has let them down this season in a very forgettable 2006 campaign. However, on the plus side, injuries to veteran hurlers have opened the door for a pair of rookies to make their mark. Carlos Marmol has had his command issues, but a low hit rate has paved the way for his success. Sean Marshall hasn’t been quite as fortunate in overcoming command issues of his own, but he has won five games and as a result has worked his way into the Cubs’ plans on a more long-term basis.

Pittsburgh Pirates: The Pirates have built quite a collection of young arms. Now if they could just keep them healthy (Sean Burnett, John VanBenschoten, etc.), maybe they’ll finally turn the franchise’s fortunes around. Last year brought Ian Snell and Zach Duke and this season a new wave of Pirate youngsters has descended, including Matt Capps, who looks like a very solid reliever in the making; Paul Maholm, who’s taking his rookie beating, but has potential; also Tom Gorzelanny, another young arm with a bright future that’s taking his licks right now. Sleeper alert for reliever Jonah Bayliss, up earlier this season and a potentially dominant pitcher.

Cincinnati Reds: The Reds haven’t gotten much out of any rookie pitchers, but they just acquired one in the Austin Kearns deal. Bill Bray has been a bit wild, but effectively so to date, getting decent results in his rookie season.

San Diego Padres: The Padres have put together the second best pitching staff in the NL and several rookies have played key roles this year. Reliever Brian Sweeney, a former Mariner farmhand, is hardly dominant, but he limits the baserunners he allows, and has experienced good success as a result. Cla Meredith, stolen from the BoSox, who were desperate to get back Tim Wakefield’s personal catcher (Doug Mirabelli), has tremendous potential as a reliever. As for the starters, both Mike Thompson and Clay Hensley have enjoyed some success, but we would like to see both of them improve their command.

Los Angeles Dodgers: The great Dodger prospect machine has been very active of late, and this year it generated a trio of arms who are making significant contributions to the club. Takashi Saito, while hardly a kid at 36, is technically a rookie because MLB refuses to recognize that professional ball exists anywhere outside of North America. Either way, he’s been tremendous, taking over as the closer when Eric Gagne went down. Jonathan Broxton is one of the best young pitchers in the game and now that he’s made the transition from starter to reliever, it’s just a matter of time before he’s closing. He has future closer written all over him. Finally, Chad Billingsley, despite some serious command issues, has been getting decent results in his first taste of big league ball. He will probably settle in as a strong second or third starter.

Colorado Rockies: The Rockies have actually had a decent pitching staff this year, which is rare footage indeed. We love what we’ve seen from reliever Ramon Ramirez, who has quickly moved up the depth chart with his excellent results.

Arizona Diamondbacks: Enrique Gonzalez has not been overmatched. His low WHIP suggests that his ERA is currently inflated, so we’d expect it to lower over the course of the second half.

Sanchez has now bookended shutout efforts against the Yankees (a very big deal) and the Astros (not that big a deal) around a couple of bitch-slappings at the hands of the Red Sox and the Nats. It’s a small sample size, but he isn’t striking out enough batters and not recording enough ground balls to sustain this kind of success. Having said that, he was averaging well over a strikeout per inning at Double-A before Florida yanked this young fish out of the Southern League waters.