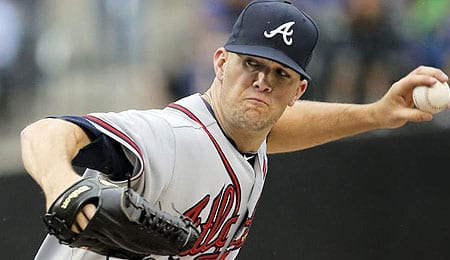 Alex Wood, with his funky deliver, has settled into the Braves’ rotation.

As if the Atlanta Braves aren’t hot enough right now, having won 10 straight games to leave the NL East in the dust and inch closer towards the top seed in the NL, they’ve gotten some good news about their injured flyhawks this weekend.

Jordan Schafer (ankle) began a rehab assignment at Triple-A Saturday and he could return to Atlanta as soon as Friday to add depth to the outfield mix.

Meanwhile, B.J. Upton (leg) came off the DL Saturday and made an immediate impact with a stolen base, which was a great sign. Sunday, he came through with two hits, including a double, and scored a run. If Upton can finally get his act together, not only will he be worth plucking from the wire if he’s been dumped in your league, but, oh man, what a great boost he will provide to an already scorching team.

Alex Wood, making his third start since moving into the rotation (and just the fourth start of his career), just keeps looking more comfortable each time he takes the bump, tossing six innings of two-hit, one-run ball at the Phillies Sunday. Looking for an NL-only league or deeper mixed league option? This 22-year-old rookie is a nice bet right now. Sure, his delivery looks weird (see video below), but who cares about that if he gets results?

After having his 11-game hit streak snapped Saturday, Chris Johnson got right back to business Monday, recording his ninth multi-hit game in the past nine tries. Woah. By recording at least two hits in eight straight games before Sunday, Johnson tied a club record, done three other times, most recently by the legendary Hank Aaron in 1959. Johnson will likely fall well short of last season’s career-high 76 RBI, but he did drive in another pair Monday, giving him 19 since the start of July. Yup, in his first season as Chipper Jones’ replacement, Johnson has become a must-own Fantasy player.

Catcher Brian McCann only managed a single in four trips to the plate Sunday, but you’ve got to love the fact that his power stroke has returned with three homers in his previous four games. While he’s spent most of the season batting fifth, lately McCann has occupied the clean-up spot (when Evan Gattis isn’t playing). That’s got to spell even more RBI chances in the second half for McCann.

Now it’s your turn. Who on the Braves are you watching right now? Let us know in the comments below.

Despite an HGH scandal, Jordan Schafer ranks second among our top 35 prospects. Spikes Up, our exclusive baseball column, is pleased to unveil the fourth annual Spikes Up Top 35 Prospects List, once again beefed up from last year’s version. This season, 11 players are back from the 2007 rankings, while another 15 (exactly half […]