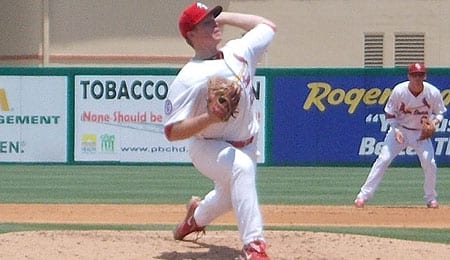 Jonathan Cornelius pitched very well in the FSL, earning a promotion to Double-A.

As a 24th round pick (2011), lefty Jonathan Cornelius naturally doesn’t get much attention, but the Florida Tech product has moved rapidly through the St. Louis Cardinals’ system, earning a promotion to Double-A last month.

This year, Cornelius was promoted to High-A and (again in a swingman role) he was superb, earning the call to Double-A at the beginning of June. He’s found life much more difficult in the Texas League and his control hasn’t been as sharp as he’s shown over the last year and a half.

However, Cornelius appears to be getting it. He’s thrown quality starts in three of his last four outings, and while the other start was as ugly as ugly can get, he’s heading in the right direction.

Yes, he’s already 25, but we expect Cornelius to start appearing on the Cardinals’ prospect lists this offseason and with the rate he’s moved through the system, he could be knocking on the door of the big leagues in about a year’s time, probably as a middle or long reliever.

Now it’s your turn. Which hitters have caught your eye in the PCL? Let us know in the comments below.