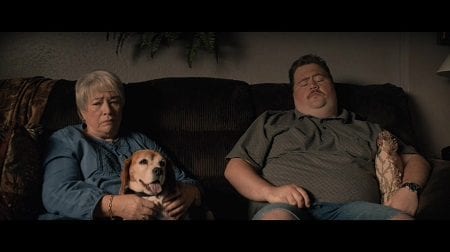 After being given a bit of background on Richard Jewell (Paul Walter Hauser), the film brings us quickly to the signature event: the bombing of Centennial Park during the 1996 Olympic games in Atlanta. Jewell was working as a security guard that night and spotted the mysterious package, alerting local authorities. The device turned out to be a bomb that detonated, killing two and wounding 111 others, numbers that would’ve been much higher minus Jewell’s actions.

Hailed as a hero in the immediate aftermath of the incident, Jewell soon became the focus of the FBI investigation, a fact that was leaked and reported by the Atlanta Journal-Constitution‘s Kathy Scruggs (Olivia Wilde). The national media seized on the report, turning Jewell’s life upside down as they staked out his home. Under suspicion, Jewell reached out to attorney Watson Bryant (Sam Rockwell), who helped keep Jewell — who remained friendly toward the FBI — from being taken advantage of.

While Richard Jewell doesn’t suffer from the aforementioned issues as other recent Eastwood efforts, it does struggle with a new one: there’s no real payoff. In fact, if there’s a crescendo to the movie it’s Bates (as Jewell’s mother) giving an impassioned speech. Charges are never pressed, there’s no “oh shit” moment when the FBI realizes it’s on the wrong path, nothing. There’s something to be said for not sensationalizing the events, but here it didn’t make for a very compelling final act.

There’s a lot of good physical comedy in Tag as the guys take some hellacious falls and blows in their ongoing attempt to not be it. Watching the reckless abandon with which they attempt to get and/or avoid one another is enjoyable, and basically turning Renner into a ninja was a clever touch — as was the slow-motion sequences where we can read their minds.