Brad Ausmus Takes Over the Tigers 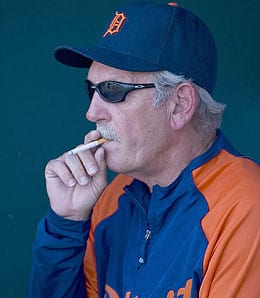 Jim Leyland has smoked his last cigarette for the Detroit Tigers. (Thenosebleeds.com)

Following the surprise resignation of Manager Jim Leyland from the Detroit Tigers after their loss to Boston in the American League Championship Series (see video below), plenty of people stepped forward to express their interest in one of the more coveted jobs in the game.

Texas Rangers pitching coach Mike Maddux – someone whose buzz as a future manager is growing – said he would “absolutely be interested.” Detroit bench coach Lloyd McClendon was considered for the gig, but the job ultimately went to Brad Ausmus, who spent 18 years catching in the majors, including three with Detroit.

Ausmus is just 44 and his only management experience is with the Israeli National team, so his choice by a big market team like Detroit raised some eyebrows – especially given that much more seasoned candidates were available.

One thing that will ease the transition is the presence of dugout coach Gene Lamont, who was also considered for the manager’s job. Lamont and Ausmus go way back – having established great chemistry in Houston when Ausmus was still playing and Lamont was the third base coach.

In fact, when Lamont interviewed for the manager position for the Boston Red Sox in 2011, he said he would have picked Ausmus to be his bench coach.

Ausmus takes over a team with very few weaknesses. Detroit had one of the top offenses in the majors, if not the best. The rotation was among the best (leading the majors in quality starts) and really, it was only the bullpen that needed some addressing. A healthy and more experienced Bruce Rondon could go a long way towards fixing that, but our guess is Detroit will look to add another arm or two to the mix, especially if free agent closer Joaquin Benoit bolts.

Among the individual talent, Detroit has some serious offensive weapons in place including:

On the pitching front, Detroit boasts:

Finally, Detroit has some issues down on the farm. Its system is one of the weakest in the game with only outfielder Nick Castellanos the only impact prospect that’s ready for prime time. Given their pitching depth, the Tigers may opt to deal arbitration eligible (and due for a crazy huge raise) Scherzer to help replenish the system if they decide the payroll – already fifth highest in the majors — is getting out of control.

Now it’s your turn. Let us know in the comments below what you think of Brad Ausmus as the new Tigers’ manager.