Squeeze Play: Tony to Put the Cleats to Jessica? 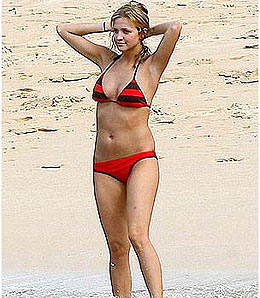 Just imagine if Ashlee followed her sister Jessica’s lead and landed her own Cowboy.

Last week, in the debut of Squeeze Play, our new column focusing on athletes getting down and dirty with celebs, we discussed Jessica Simpson and Tony Romo’s Cabo getaway in the days leading up the Cowboys’ playoff match against the Giants.

Of course, Dallas went down in an upset and, according to OK! magazine, Romo is ready to send Simpson packing.

Jessica, however, says the report is fertilizer-like, and she’s sicked her lawyers on the pub in the hopes that OK! will publish a retraction.

So what really happened?

Well, industry sources have told us that America’s sweethearts weren’t alone on their Mexican tryst.

Apparently, the couple was joined by Jessica’s family and at least one of Tony’s teammates. Does that mean Ashlee will be the next Simpson gal to hook up with one of America’s Team? How can we get Terrell Owens into this picture? Couldn’t you just see it now? T.O. and Ashlee practicing a hoe-down touchdown dance while he pulls a Sharpee out of his sock and she lip synchs with it? There’s a mental picture I didn’t need.

Perhaps this was also an image that Romo couldn’t live with, so he tried to break up her with. Reportedly, he’s also coming to realize she’s a diva (no kidding?) and is high maintenance (again, what a newsflash that must be). Romo is also apparently getting sick of the fact that Jessica’s dad Joe is always hanging around. It’s pretty hard to get busy with your girlfriend when her father is breathing down your back, asking you for free tickets and autographs.

The clincher? Romo won’t move to L.A., and she said there’s no way she’ll move. Romo’s had his share of long distance hookups on the field, but this reeks more of a Hail Mary situation. No wonder he wants out.

However, Jessica is not having it. When Romo called her last week to try to split up, she wouldn’t listen.

Well, she can ignore this all she wants, but the fact remains that it’s fourth and 10 – time to punt. I’d like to get a little poetic here and toss in another verse that rhymes, but that would be just plain rude. And we can’t have that, can we?