Podcast: The Beanball Wars Rage On 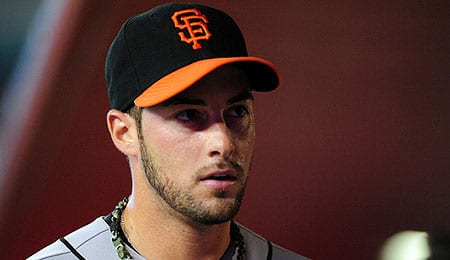 George Kontos’ suspension is just one of many feel-good stories this week.

On the plus side, after missing the Podcast last week, we were back this week. On the down side, so were the technical issues, causing about 90 seconds of dead air early on (when it starts, skip forward to the 4:00 minute mark) as we got kicked out the system — apparently as a result of a storm system. At any rate, on this week’s episode of RotoRob’s Fantasy Baseball Weekly Podcast (heard every Thursday at 9 p.m. EST on Blogtalkradio), we muddled on and were were able to bring you plenty of Fantasy baseball goodness, including:

Listen to the complete show below.

After a solid career at Arizona State, Bordes was picked by the Orioles in the ninth round in June and assigned to the Aberdeen IronBirds of the NYPL. Bordes was actually taken by the Tigers in the 24th round last year, but opted to return for his senior season at ASU, and he improved his stock by going 7-1, 3.15. With the IronBirds, he’s 1-1, 3.86 and has given up just 13 hits in 18 2/3 IP, but he’s walked 12 while fanning 15. The southpaw has a quality arm capable of bringing it at 91 mph, but obviously he’ll need to rein in those walks if he wants to carve out a career as a lefty reliever.