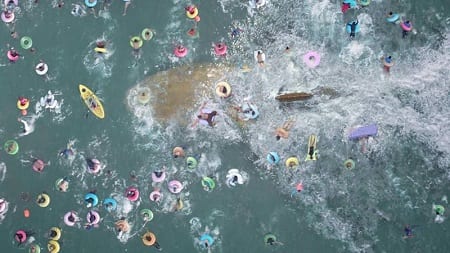 When watching trailers for The Meg before it landed in theaters the old joke about sex and pizza popped into our heads, the one where even when it’s bad it’s still pretty good. That’s how we feel about shark movies with Jaws leading the unofficial “Oh that’s on cable right now, I’m gonna watch it” rankings. Deep Blue Sea, 47 Meters Down, The Shallows… so where does The Meg fit into the hierarchy? Let’s dive in and find out.

Jonas (Jason Statham) and his rescue team are trying to get injured crewmen off of a damaged nuclear submarine when something begins damaging the hull, forcing Jonas to break off the op and abandon his team. Despite rescuing several sailors, Jonas’ actions come under scrutiny, and in the aftermath he can’t bring himself to continue as a rescue diver.

Five years later, an underwater research facility bankrolled by billionaire Jack Morris (Rainn Wilson) reaches heretofore unknown depths, revealing an entirely new ecosystem. During the maiden voyage to explore the region their sub is disabled by an unknown creature, stranding them in the deep. To rescue them requires someone with special skills, so they reach out to Jonas, who relents when he learns his ex-wife is on board.

By the time Jonas arrives, Suyin (Li Bingbing), the site’s top oceanographer, has already launched an ill-advised rescue, further complicating the task when her vehicle is damaged as well. While attempting to save the stranded explorers, Jonas finally lays eyes on the megalodon, a massive prehistoric shark thought long extinct. When the intrusion opens a path for the meg to reach open waters, the team must find a way to stop it as quickly as possible.

Perhaps the biggest reason sharks are more frightening than bears or lions is that you can’t see them under the water. As such, limiting the audience’s exposure is always a good idea — one that Jaws proved out of necessity — and The Meg follows that line of thinking. The CGI is certainly capable enough when the shark needs to be shown, but there’s a smart ratio of full-blown shark shots to tension-building “where is it?” moments.

There’s a B-movie hokeyness to the plot and characters that comes across as endearing thanks to a mostly solid cast. Statham works as the no-nonsense lead, Bingbing as the capable love interest, Wilson as the dot-com billionaire and Cliff Curtis as the sorta comic relief guy. Some of the others aren’t given much to do, which is a shame, especially Ruby Rose, who we enjoyed in John Wick 2.

Pacing is another strength in The Meg, as things start fast and rarely throttle down, though it avoids being in such a rush that it undercuts the ability to build tension. Everything just sort of moves from one problem to the next with characters trying to solve it without being eaten. There’s no depth here (except for the water), but it’s fun.

As noted, everything in this film takes place at a superficial level. Character development and plot twists (such as they are) are given almost no time to breathe, with characters going from hating and distrusting each other to being all good as soon as it’s convenient for it to be that way. The romance angle also feels forced, like director Jon Turteltaub looked at the script and decided they needed something, anything, to focus on in between shark encounters.

Although we liked the cast, some character tropes are recycled to an eye-rolling degree. Smart overweight guy is there, along with guy who works in the middle of the ocean but can’t swim, don’t judge a book by its cover tech person and, of course, smarmy asshole who redeems himself in the end. One or two is to be expected, but they’re pushing the limits here.

A shade over 20 minutes of extras are included, making this a pretty sparse offering. There’s a general making of featurette with the usual “everyone is great” sound bites and one focused on the creation of the shark, which is a little more interesting.

We enjoyed The Meg. It knows what is, leans into it and tries to deliver a good time above all else. If you’re looking for mindless fun with solid action and special effects, you’ve found it.