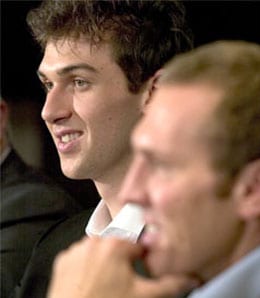 It’s about bloody well time we piped in with some draft reactions, don’t you think? Well, let’s start off a series of draft pick recaps and tip it off at the top.

Toronto surprised no one by selecting Italian forward Andrea Bargnani with the No. 1 selection. There was some speculation the Raptors might try to trade down, and if they had gotten the right deal, they certainly could have grabbed Bargnani a few picks later, but no dice there.

So the Raps grabbed a player whose obvious comparisons to Dirk Nowitzki are plentiful: seven-foot international player with a great outside game and terrific jump shot. Let’s just hope for Toronto’s sake that Bargnani winds up with a game closer to Nowitzki than, say, Jake Tsakalidis, another European player that GM Bryan Colangelo drafted (when he headed the Suns) who has failed to deliver as an NBA player.

In Summer League action Monday, Bargnani shot 5-for-8 from the field and sunk both his free throws for a dozen points in 28 minutes. He managed a pair of boards, both off the offensive glass.

Will he live up to his nickname, ‘Il Mago’ (The Magician)? Well, the 7’1″, 248-pound power forward has a long way to go before that moniker sticks. But at least he brings a winning attitude to Toronto — something sorely needed — after playing on the Italian National Championship winning team this year.