The Wire Troll: Jake Odorizzi Gets the Call 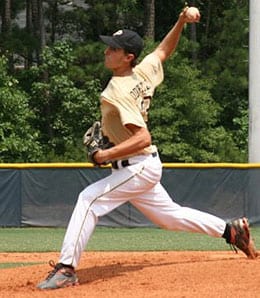 Jake Odorizzi is finally getting his shot with the Rays.

We’re at that time of year when we’ve got to make a decision for many of our Fantasy squads. Contenders or pretenders? Are we building for the chase or rebuilding for 2014? Whatever decision we make will determine the path we take. At RotoRob.com we’ve always been huge proponents in moving early and saving a buck or three and our in-game strategy hasn’t changed one iota in 2013. This week we’ll take a look at some players that could be right around the corner and worthy of some early attention as we round out our contending squads.

Jake Odorizzi, SP, Tampa Bay Rays (CBS: 18 per cent owned, ESPN: unowned): Odorizzi is the winner of the David Price replacement sweepstakes. Chris Archer owners will have to put their plans on hold for now. Acquired along with Wil Myers in the offseason, Odorizzi has enjoyed a solid campaign at Triple-A Durham, going 4-0. In 44 2/3 IP he’s allowed 34 hits and 15 walks, and has chipped in with 47 strikeouts. With no definitive timetable established for Price’s return, Odorizzi could be in for a lengthy stay with the big league club.

Yasmani Grandal, C, San Diego Padres (CBS: 16 per cent owned, ESPN: unowned): Grandal’s 50 game suspension is drawing to a close and it’s time to start looking at him in two-catcher sets. In 192 at-bats last year, he hit eight homers with 36 RBI and a great .297 BA. Nick Hundley is enduring a horrid May so the at-bats will be there. Grandal is eligible to return the last week of May so making a move now is prudent.

Raul Ibanez, OF, Seattle Mariners (CBS: 9 per cent owned, ESPN: 3 per cent): After an absolutely abysmal start, Ibanez is currently the hottest bat in the game bar none. Last week he mashed five homers with 11 RBI and raked to the tune of a .364 BA. There are a lot of moving parts in Seattle and eventually this streak will come to an end, but while he’s hot ride it for all it’s worth.

Joel Peralta, RP, Tampa Bay Rays (CBS: 10 per cent owned, ESPN: 3 per cent): The leash just keeps getting shorter and shorter for Fernando Rodney. Peralta picked up his first save last week and is the go-to guy should Rodney continue to struggle. Rodney was amazing last year, but seems to be returning to his pre-2012 form and we’re betting that it’s not a question of if, but when Peralta moves into the closer role in Tampa Bay.

Christian Yelich, OF, Miami Marlins (CBS: 32 per cent owned, ESPN: unowned): Yelich has been absolutely tearing it up at Double-A Jacksonville. In 103 at-bats, he’s mashed six homers with 23 RBI, a couple of thefts, and an outstanding .320 BA. The Marlins have never been shy when it comes to promoting their young players (or attempting to sell a ticket or two) and Justin Ruggiano and his .173 BA in May won’t be a roadblock. A pre-emptive strike involving Yelich has the potential to return large dividends when he gets the call.

Michael Wacha, SP, St. Louis Cardinals (CBS: 13 per cent owned, ESPN: unowned): Wacha opened some eyes with a strong spring and simply hasn’t looked back. In eight starts at Triple-A Memphis he’s a perfect 4-0 while sporting a 1.89 ERA and .902 WHIP. He’s allowed a scant 29 hits in 47 2/3 IP. Wacha is a bit of a long shot being that he’s only pitched 68 2/3 IP since turning pro, but the the Cards rotation currently consists of Adam Wainwright, Lance Lynn, Shelby Miller, John Gast, and…

Trevor Rosenthal, RP, St. Louis Cardinals (CBS: 22 per cent owned, ESPN: 6 per cent): Rosenthal got out of the gate slowly, but has turned it around nicely in May with six holds in eight appearances and 11 strikeouts in 6 1/3 IP without an earned run allowed. He’s firmly established himself in the setup role and is next in line for the closer gig if Edward Mujica should falter.

Michael Pineda, SP, New York Yankees (CBS: 44 per cent owned, ESPN: 1 per cent): Pineda’s fastball is sitting at 93 mph and topping out at 95 mph. He could be heading out on a rehab assignment shortly and be back before the break. Pineda’s value will only rise with each successful rehab start, so consider stashing him now.

Kevin Gausman, SP, Baltimore Orioles (CBS: 14 per cent owned, ESPN: unowned): We’ll see Gausman starting in Baltimore at some point this season and with a scant five free passes in 46 1/2 IP at Double-A, control will not be an issue. I’m betting on sooner rather than later (although the Orioles maintain they will not rush Gausman).

Brandon McCarthy, SP, Arizona Diamondbacks (CBS: 39 per cent owned, ESPN: 33 per cent): McCarthy has now put together a string of three consecutive quality starts including a complete game three-hit gem Saturday. It’s time to add him in all formats.

John Gast, SP, St. Louis Cardinals (CBS: 14 per cent owned, ESPN: 2 per cent): Gast had a decent first outing, which earned him a second. The Cards rotation is a bit on the lean side.

Scott Feldman, SP, Chicago Cubs (CBS: 42 per cent owned, ESPN: 40 per cent): Feldman has racked up seven consecutive quality starts and has won four of his last five starts. This further reinforces that each and every year there will be starting pitching that comes out of nowhere to contribute. He’s currently available in more than 50 per cent of leagues at both CBS and ESPN and that needs to be rectified.

Leonys Martin, OF, Texas Rangers (CBS: 22 per cent owned, ESPN: unowned): Martin’s ownership has fallen from a high of 56 per cent at the start of the season to a current low of 22 per cent. He’s currently tearing up the basepaths with four thefts in his past three games. Yes, Martin is still platooning with Craig Gentry, but for how long?

Andy Dirks, OF, Detroit Tigers (CBS: 20 per cent owned, ESPN: 18 per cent): Dirks has three homers, and eight RBI in May and is guaranteed full-time at-bats at least until Austin Jackson returns.

Cameron Maybin, OF, San Diego Padres (CBS: 21 per cent owned, ESPN: 15 per cent): If your need is speed, consider Maybin as he’s nearing a return from the wrist problems that have sidelined him for the past month.

Mark Ellis, 2B, Los Angeles Dodgers (CBS: 19 per cent owned, ESPN: 8 per cent): Ellis will be back from his strained quad injury very soon and given that he was wielding a hot stick prior to getting hurt, he could provide sneaky value in the middle-infield when healthy.

Pedro Strop, RP, Baltimore Orioles (CBS: 2 per cent owned, ESPN: unowned): Strop has righted the ship after a horrible start and closer Jim Johnson has been beaten up badly in his last couple of appearances. Johnson is in no immediate danger of losing the job but until he gets back on track, Strop could find his way into the ninth inning on a temporary basis.